Richard wanted to get under way early so we didn’t get muddled up with the Devizes to Westminster Canoe Race so we left at 8.45am – much tooooo early for me!

Down through Fobney Lock and at County Lock we found our first race Marshall.  He told us the first paddlers were about an hour away.  Up through Reading – I always love this bit of the trip but it was too early for many people to be around.  There is some work being done on both sides of the canal going through the Oracle Shopping Centre.  I don’t know what they are doing but hopefully it will all be finished when we go back through Reading in the Autumn. 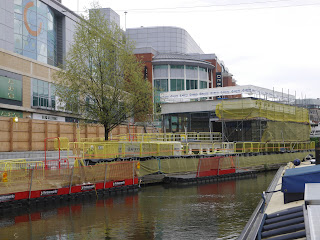 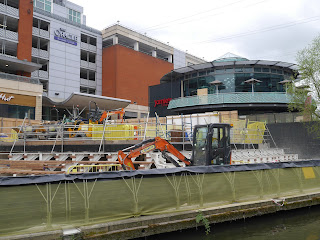 At Blakes Lock we decided to stop and wait for the first paddlers to arrive.  It was quite a long time but I really wanted to see them.  We went into the lock and stopped in there!  Mary H had a ride down and up in the lock as someone was coming up! 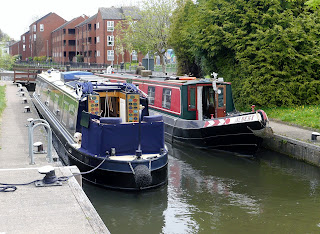 The canoes and kayaks were taken out of the water above the lock and put back into the water on the other side of the lock island.  Apparently there was a goose sitting on her nest right in the way and she was NOT going to move!  Her husband was not a happy chappy.  The first man was way ahead of the others and then the a few more came and suddenly the canal was filled with small craft.  I found it fascinating and could have watched all day but it was time to move on. 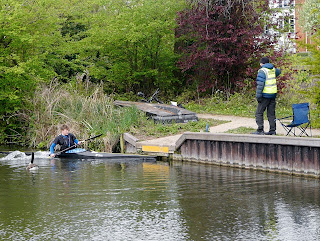 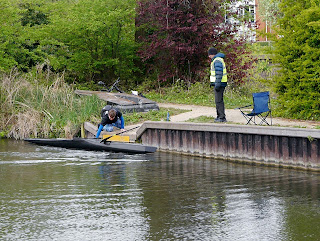 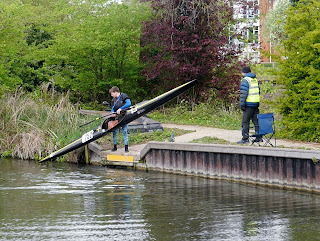 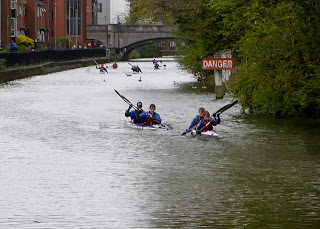 The Devizes to Westminster International Canoe Race starts in Devizes and finishes just downstream of Westminster Bridge. The race has been held annually over the Easter Weekend since 1948.  The race is 125 miles long and has 77 portages. The first 52 miles are along the K & A Canal to Reading, the next 55 miles are on the River Thames to Teddington. The final 17 mile section is on the tidal portion of the Thames.  The race is a severe test of skill, physical and mental stamina and planning which produces a memorable sense of achievement for those successfully completing it.  There are 5 classes - Senior Doubles who race non-stop from start to finish, starting on Easter Saturday and finishing on Easter Sunday.  Then there are Senior Singles, Junior Doubles, Veteran/Junior and Endeavour (a non-competitive doubles class) who compete over 4 days starting on Good Friday and finishing on Easter Monday.  I can’t find the results for last year but in 2015 the junior team of Daniel Palmer and Connor Peters (Fowey River CC) completed the race in 16 hours, 10 minutes and 31 seconds.  It would appear that the last crew across the line took 31 hours!

As we joined the Thames we turned left hoping to find a space at Tesco.  I wasn’t holding my breath as I had heard that the continuous moorers were there in force but fortunately we found a nice Mary H sized space and I took myself off into Tesco.  We have a new fridge this year.  Our old fridge had a freezer box at the top which a) wasn’t any use as a freezer and b) we now have a proper freezer.  We have changed it for a larder fridge and hopefully, as well as being bigger, it won’t take as much power as the old one.  I have another shelf now and even after shopping the fridge isn’t full 😊 It was then up to Better Boating for fuel followed by a U turn and we were off downstream heading to Shepperton.

Richard parted company with £191 at Sonning Lock for our Thames Licence for a month!  We have had a Gold C&RT licence (which means we can use Environment Agency waterways at no extra cost) for the last few years but as we weren’t too sure what are plans were for next winter we decided just to get a standard licence this year – we won’t make that mistake again!

The Thames isn’t nearly as busy as we thought it would be bearing in mind it is Easter.  Maybe once we get to Henley tomorrow we will find it busier.  We found a nice spot in the middle of nowhere to moor however Waterexplorer says we are 0.13 miles SW of St. Patrick’s Bridge!

At just after 7pm I heard the tune of 10 Green Bottles getting nearer and nearer as the first of the Senior Double paddlers came past.  I had been tracking them so knew they were close.  The team was 2 ladies who told me that singing helped while away the time – they were onto 73 green bottles!  After that we heard lots of canoes/kayaks go by – talking to each other obviously helps the time.  They all had lights and some had pretty lights too.