I woke up about 1am aching all over after my fall yesterday.  Great I thought I’m going to be in a bad way tomorrow however when I next woke up I was fine – no aches just a sore knee!

We were underway by 9.30am with only a few hours to go to get to our preferred overnight mooring spot.  Bearing in mind it’s Good Friday the canal was very quiet this morning – we hardly saw another boat.

I am always worried when we get to Sheffield swing bridge as it is known to be unreliable but fortunately today it closed as it should do and I didn’t have the embarrassment of car drivers getting cross with me when everything gets jammed up.

At Garston Lock there was nearly an incident!  I took the boat into the lock and jumped off to shut the gate as both gates were open.  I did take the centre rope with me and tied it to a bollard but when I got back to the boat she had drifted away from the edge and I couldn’t get back on and it didn’t matter how hard I pulled on the rope the boat wouldn’t come back to me.  I was then worried that, as Richard had already started to raise a lower paddle, the boat was sitting on the lock cill.  I yelled at Richard to lower the paddle but it wouldn’t go down!!  Richard came running and managed to leap onto the boat and drive it forward.  In fact the cill was a long way down and the boat was, very probably, not sitting on it at all but it goes to show how easily these things can happen especially when a paddle won’t drop.  I’ve written to C&RT telling them about the paddle. 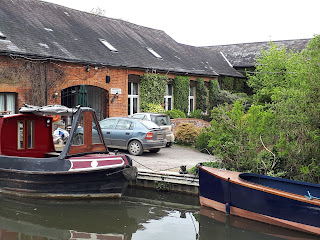 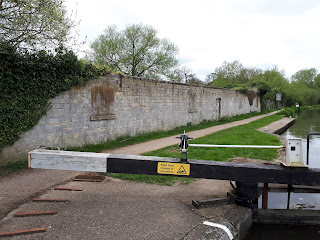 It would appear that someone wants to build a new cafe, holiday let apartment, and manager's accommodation on top of the existing footprint of the old mill. 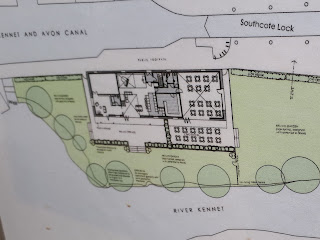 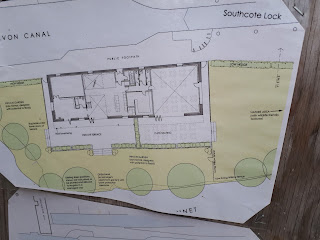 During the 18th century, a wire mill was built on the south side of the canal, on an island between the canal navigation and the natural course of the Kennet.  This mill was supplied with bar iron from Sowley Forge in Hampshire.  In 1850, a pumping station was built on the north side of the canal. The station was used to pump water to the Bath Road Reservoir in Reading to cater for the town's population expansion and provided the town with its first filtered water supply.  By 1878, maps showed that the wire mill was disused. In 1896, the Southcote Water Works was superseded by the newly upgraded steam-powered station downstream at Fobney; Southcote's water wheels and pumps were mothballed. Three years later, however, the Southcote works were overhauled and new filters and pipes were installed.  The pumping station was in use until 1982 when Fobney was upgraded to cope with the town's demand.  The main pumping building was converted into a residential dwelling and the wire mill remained derelict.  I wonder what will happen next.

We only had a short way to go to where we wanted to moor for the night but someone was already there ☹ so we moved on down towards Fobney Lock and pulled over.

Richard spent the afternoon washing the side of the boat and painting another section of the roof while I caught up on emails and the like which had been sadly neglected this week.