A story of bridges solved by a mathematical solution!

We only had a hop, skip and jump to where we are now moored.  Basically, we are killing time before we go back to Oxford on Thursday.

I have absolutely nothing to blog about today so I’m going to bore you all silly with some bridge information!!  Why?  Because I like bridges – especially odd bridges and, as you proceed through the “really interesting facts” below, I used to live in Shepperton and Walton bridge was always a real pain.

This bridge is at Iffley Lock and is called The 'Mathematical' Bridge.  It was built by the Thames Conservancy in 1923.  It was built as a tribute to the similar bridge over the Cam in Cambridge.  This bridge was designed by William Etheridge, and built by James Essex in 1749. The bridge appears to be an arch but, is in fact, composed of entirely of straight timbers which are built to an unusually sophisticated engineering design, hence the name.  A popular fable is that the Cambridge bridge was designed and built by Sir Isaac Newton but he couldn’t have been directly involved since he died in 1727, twenty-two years before the bridge was constructed.  The first photo is of the Iffley Bridge taken on May 6th and the second is of the Cambridge bridge taken (by me) on 22nd February 2015. 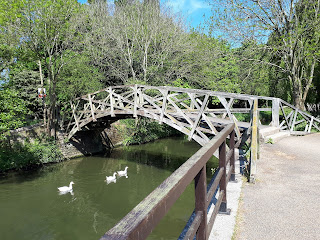 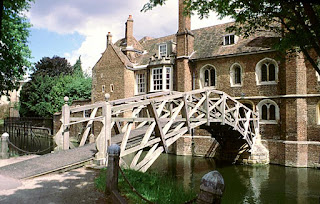 Another Mathematical Bridge was built, again over the Thames but between Shepperton and Walton-on-Thames.  The bridge was also designed by William Etheridge.  Construction of the bridge was started in 1748 and was completed in 1750. The construction was paid for by Samuel Dicker who was the MP for Plymouth and owned property in Walton on Thames. By paying for its construction Dicker also obtained the right to collect tolls from users of the bridge under the statute. Opponents to its construction comprised: ferry operators, who foresaw an impact their livelihoods; the bargees who thought it would make the river unnavigable; and a minority of residents of Walton-on-Thames who were worried about an influx of undesirable elements from substantially rural and wayfaring villages of West Middlesex north of the river. Despite the late opposition following his Act, Dicker pressed on with construction, probably motivated by his own desire for easy access to London and for the financial benefits the tolls would bring.

The Old Walton Bridge was supported by four central stone piers connected by three arches built of wooden beams and joists. The span of the central arch was 130 feet - at the time the widest unsupported span in England. The other two main arches were each 44 feet, though Dicker later suggested that the design would have allowed for side spans of 70 feet or more. Away from the water were five further small brickwork arches on each side of the river. Although considered an impressive feat of engineering at the time of its construction, the bridge stood for only 33 years. Dicker died in London in 1760 and his estates in the area were sold. The bridge passed to his nephew, Michael Dicker Sanders, but he found it difficult to meet the costs of its upkeep. A report on the condition of the bridge in 1778 suggested that decay in the wooden frame made it unsuitable for use, and it was dismantled in 1783 to make way for a stone-clad brickwork bridge which was completed in 1788 and eventually collapsed in 1859. 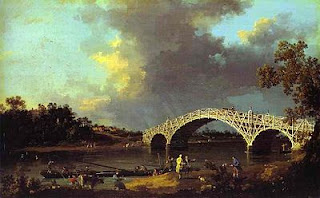 A second Walton bridge made of stone (and internally of brick) was opened in 1788. This bridge inspired three paintings by Turner in 1805 of different scenes featuring the bridge. 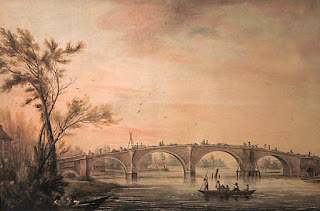 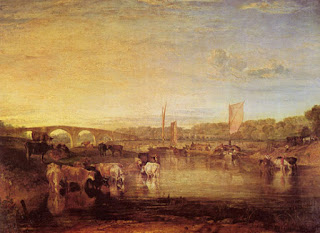 The second bridge stood for 73 years until disaster struck in August 1859. The two central arches collapsed suddenly into the river. 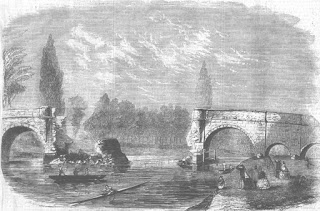 A third bridge was built 1863-1864.  In 1940, the bridge was damaged during a German air raid. The structure was weakened as a result and weight limits were imposed. After the war, and the construction of the fourth bridge, the third bridge remained in use for pedestrians and cyclists but by the 1980s it became too costly to maintain it and it was demolished in 1985. 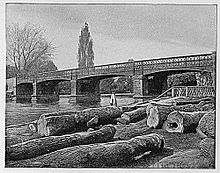 The fourth bridge was constructed in 1953 on the downstream side of the old bridge, using a construction designed by A.M. Hamilton.  It was used initially by motor traffic, but, after the opening of the 5th bridge in 1999, it became a pedestrians and cyclists only bridge.

In 1999, while the fourth bridge remained standing for use by pedestrians and cyclists, another temporary structure, the fifth bridge, on the site of the original bridges, was opened for vehicular traffic. However, engineers predicted structural weakness by 2015, and plans had to be made for a new bridge. 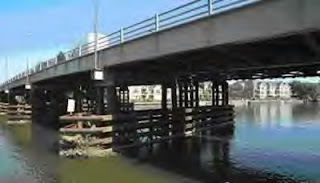 The sixth bridge was opened on 22 July 2013.  The £32.4 million bridge has no piers in the river, thus opening up views along the river and improving navigation for boats. 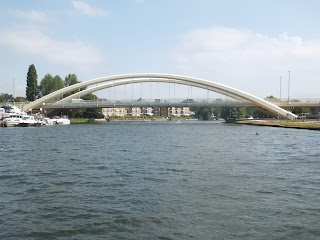 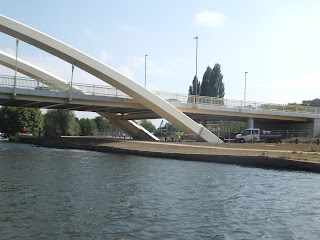 All the above photos, with the exception of the last two, have been borrowed from the internet.

If you are still awake hopefully there will be more to blog about tomorrow!