Lovely blue sky and sunshine greeted us this morning.

Richard took Muffin for his usual morning constitutional but brought back a dirty, soggy doggy!  Apparently they had passed a stream covered in duck weed and, yes you guessed it, Muffin tried to walk on water!  He did need a shower anyway as he was beginning to smell rather too “doggy”.

Last night I saw a Mummy duck with seven ducklings but this morning there were only four.  It could have been another family but ducklings are few and far between on the River, so I doubt it. 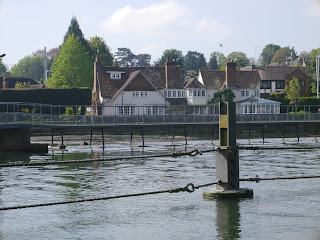 We left Pangbourne at 10.15 am and went through Whitchurch Lock.  As we left Goring Lock I remembered that I had wanted to go and see the floral tributes outside George Michael’s house – but it was too late.  I have seen lots of photos but I would have liked to see them for myself.

Just below Cleeve Lock is one of our all-time favourite mooring places however there are now big No Mooring signs.  I asked the Lock Keeper what had happened and it would appear that two narrowboats had moored there for three weeks.  They were all locked up and deserted with no notices in their windows.  The farmer was not impressed and decided that no-one is to moor there now.  Apparently, the resident Lock Keeper is trying to persuade the land owner to change his mind – I do hope so as we just love it there.

The Cleeve Lockkeeper told us that it has been the driest Autumn and Winter on the Thames for 20 years – rather different to when we were in Spain when it was the wettest and coldest winter for 30 years!!

We topped up with water just above Cleeve Lock and then meandered along to Wallingford.  We usually have to shoehorn ourselves in here but there were only three other boats moored up.

We passed this new house being built just below Wallingford.  It is either going to be a big house or flats.  Maybe we will see it finished when we come back this way in the Autumn. 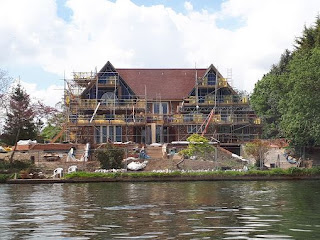 I went for a wander into Wallingford.  There is a lovely house set back from the road just over the bridge and I’ve often looked at it and wondered!  So today I thought I would see if there is anything on the internet about it.  Funnily enough it has been for sale and is currently sold subject to contract.  The price?  A cool £2.5 million!  St Nicholas House is a beautiful Grade II listed property, built circa 1800 and restored to a high standard. It offers spacious and elegant accommodation, arranged over three floors, with a wealth of original features including fireplaces, working window shutters and moulded cornices.  It also has a
self-contained studio with a bedroom, bathroom, sitting room and kitchen. Perfect as staff accommodation or as a guest house. 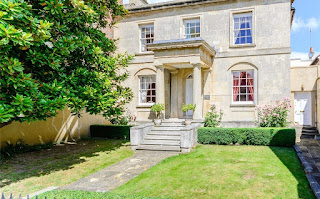