A day at sea with some excitement.

We woke up in the middle of nowhere to the sad news of the bombing in Manchester.

I belong to an internet forum called Cruise Critics as well as a Facebook group called Celebrity Cruise Addicts.  Today Cruise Critics were having a get together.  It wasn't what i expected but I did get to meet some of the people I had been chatting to on both sites. 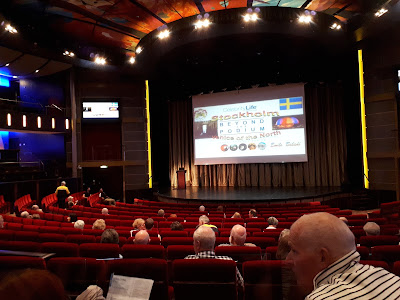 From there it was to a talk on Stockholm by Emile Baladi.  Stockholm, the capital of Sweden, encompasses 14 islands and more than 50 bridges on an extensive Baltic Sea archipelago.  The area has been settled since the Stone Age, in the 6th millennium BC, and was founded as a city in 1252 by a Swedish statesman Birger Jarl to protect Sweden from sea invasions made by Karelians after the pillage of Sigtuna on Lake Mälaren in the summer of 1187.  Stockholm's core, the present Old Town (Gamla Stan) was built on the central island next to Helgeandsholmen from the mid 13th century onward.  Currently, Stockholm's metropolitan area is one of the fastest-growing regions in Europe, and its population is expected to number 2.5 million by 2024. As a result of this massive population growth, it has been proposed to build densely-packed high-rise building in the city centre connected by high-rise walkways

We went, along with everyone else from the talk to Oceanview for lunch but couldn't find anywhere to sit so returned to our cabin and tried again later on and were successful. 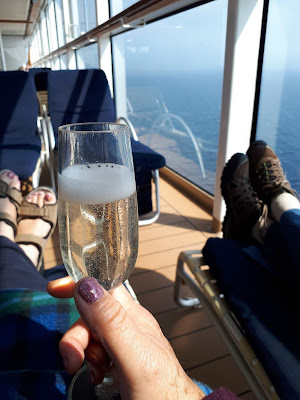 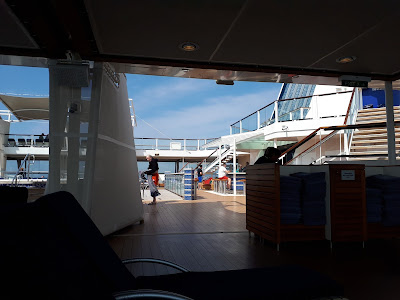 During the afternoon, we sat out in the sunshine in a sheltered spot near to the pool drinking champagne - I could get used to this I thought!  Suddenly we were buzzed by a helicopter which appeared to be from the Danish Military.  The side door opened and three men looked out.  The chopper stayed alongside us for some time before the door shut and it flew away.  It was the talking point round the bar but no-one knew what was going on! 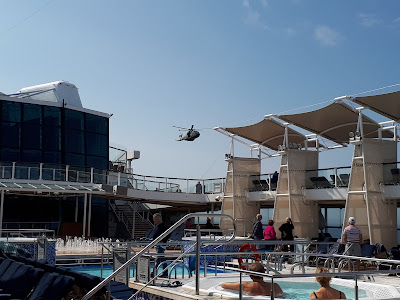 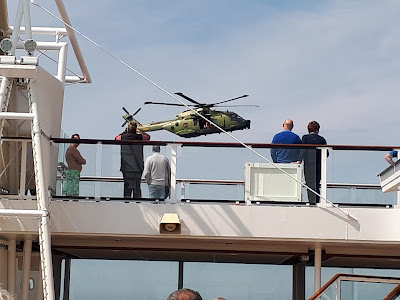 Tonight was the first Evening Chic night.  Celebrity no longer have the “stuffier” formal evening – they say that while dressier than Smart Casual, Evening Chic is intended to be less dressy that Formal attire.  I wore smart black trousers and a dressy top while Richard wore a shirt, tie AND jacket (he had trousers on too of course!).  It was a special meal and Jim had frogs legs! 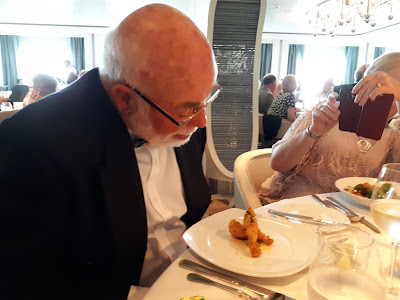 I ended up with four drinks in front of me – I’m not sure how that happened!  Please note that one was water! 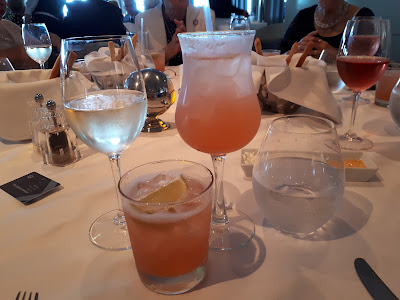 This was my dinner. 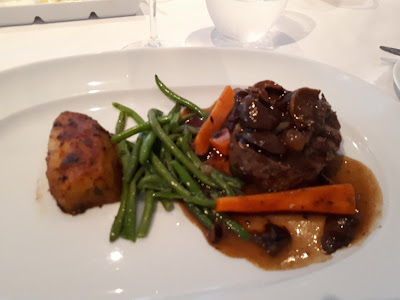 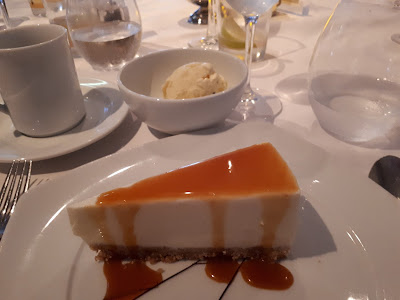 We went to the theatre to see the Celebrity Showtime - Topper.  The description of this is "is it better to hold dreams and aspirations close to heart or let them run free".  Certainly a strange, but colourful, production!

After the show we went up to the Sky Lounge for a nightcap or two!

Each evening we would find a copy of the next day’s activities called Celebrity Today.  The Captain puts a quote on each day so I will add his quote at the end of each day.  Today it was

“A ship in harbour is safe, but that is not what ships are built for” John A Shedd
Posted by Linda Gifford-Hull at 14:25