The great day arrived.  Today we joined the Celebrity Eclipse for our 14 day cruise to the Baltic (or Scandinavia and Russia as Celebrity call it). So much planning and research has gone into this cruise but you can't plan for everything!

Penny and Jim arrived on Saturday evening and Sunday morning was spent quietly getting the final things packed, luggage labels attached and then waiting four our taxi to arrive to take us to Southampton.  I had booked an 8 seater to take the four of us plus about 10 pieces of luggage!  11am arrived and no taxi so i phoned the company who told me that they would investigate and call me back. 10 worrying minutes and the phone went - they couldn't contact our driver but had despatched 2 normal taxis.  By the time they arrived we were 30 minutes late in leaving - my stress levels were so high i thought i was going to be sick.  It was a 40 minute journey to Southampton and the cruise terminal.  I was so excited when I saw Eclipse for the first time which made the, rather long, check in bearable. 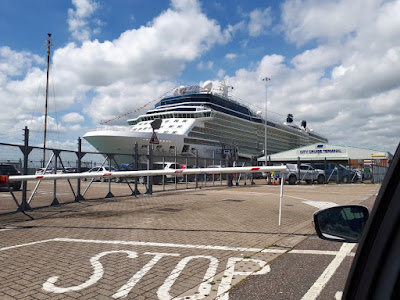 We were able to go to our cabins straight away and dump our carry on bags.  Then it was up to the Ocean View cafe for lunch. Our first taste of what we were to expect for the next two weeks was NOT disappointing!  I only had salad but there must have been at least 12 different types to help yourself from.  The selection of lunch food was a little mind blowing with such a large selection to choose from.

Next it was lifeboat drill which, thank goodness, is taken very seriously with everyone told to attend and the few cabin numbers that hadn’t checked in were read out - like naughty children! 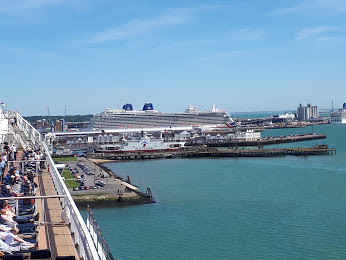 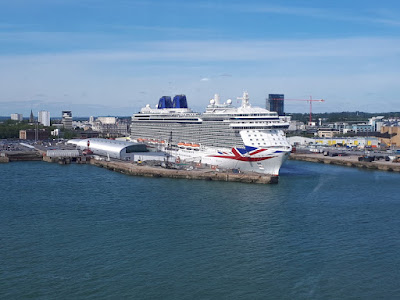 Our first sail away was exciting.  We had blue sky and sunshine as we left and with the house group playing it got us all in the mood for our cruise.

We then had to tackle the job of unpacking.  There is quite a lot of storage in our cabin except for underwear!  The cases go nicely under the 6 foot wide bed.

Unpacking had to be interrupted for dinner.  We have chosen the early sitting which is 6pm (the later one is 8.30 which is a bit late for us every night).  We are sharing our table with four ladies from Wiltshinre.  They all seem very nice but its a shame for Richard and Jim not to have any men to talk to.  The food was excellent with my main being rib of beef which was beautifully cooked as was the Yorkshire pudding - the horseradish was homemade too.  Pudding was a Dulce de Leche creme caramel - amazing!

After dinner we took in the show.  I wasnt sure if I wanted to go as it was a comedian but Mike Miller was excellent - he is a master of the one liners. 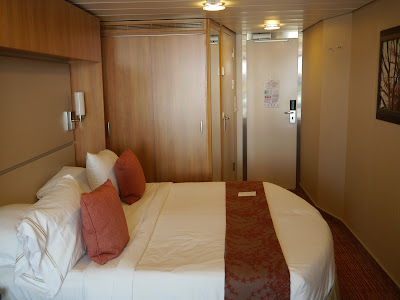 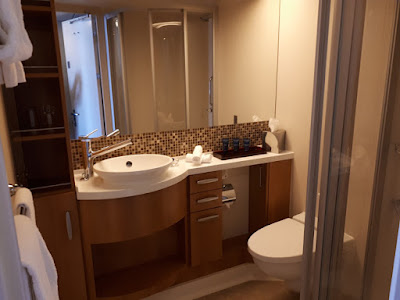 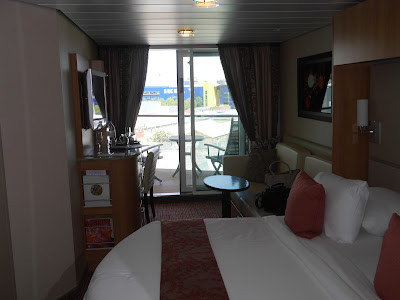 We then had to finish the unpacking before we could go to bed and eventually rolled into bed exhausted.

I found this photo on Facebook.  Someone on Hayling Island has been on the beach and had taken photos all the 5 cruise ships leaving today.  Here is Eclipse.

We woke up in Zeebrugge having not felt a thing whilst docking!  We had planned to take the train up to Bruges but last night we decided against it as before I came away I suddenly started with pain behind my right knee and it was extremely bad during last night.

Yesterday was Richard’s birthday so I put all his cards up around the cabin.  I was also given the flowers by my friend, Ingrid, just before we left yesterday. 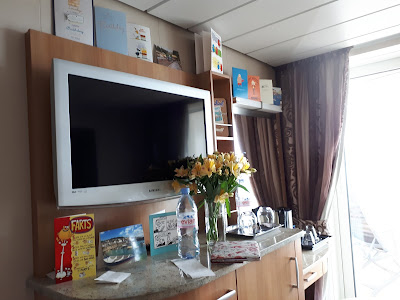 We tried the Oceanview Cafe for breakfast and the variety of choices was vast from good old English to the nice crispy bacon in the American selection.  I had fruit followed by some crispy bacon, scrambled eggs and mushrooms - I adore mushrooms but might just get mushroomed out on this cruise!

We decided to upgrade my drinks package from Classic to Premium as i didn't really enjoy the "Classic" wine very much last night.  I can get Villa Maria and proper champagne now 😊

It was then a visit to the Medical Centre to get some anti-inflammatories as i appear to have left mine at home ☹ The ship's doctor was an extremely nice man who sent me off with a diagnosis of a pulled hamstring, strong anti-inflammatories, a muscle relaxer for night time, a knee support and instructions to use a walking stick and take it easy for the next few days. 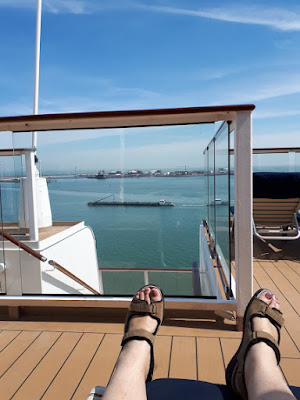 I took the doctor at his word and sat and sunbathed on the very top deck for what was left of the morning having stopped off at Cafe al Bacio for coffee.

After lunch in Oceanview Richard and I returned to our cabin and watched all the coaches full of trippers returning to the ship.  There were masses of them!  The Captain had asked for everyone to be back onboard by 2.30pm but coaches were still arriving back after that time and the two queues of people trying to board were very long.  Eventually everyone was onboard and first one gangplank was removed by a crane and then the other.  We didn't go to the sail-away as we wanted to watch our departure from our balcony where we could see the bow thrusters doing the job by pushing the bow out quite quickly and the Asipods doing their bit at the stern by pushing us out gently.  It was very interesting and we were soon out of the harbour and on our long journey to Stockholm. 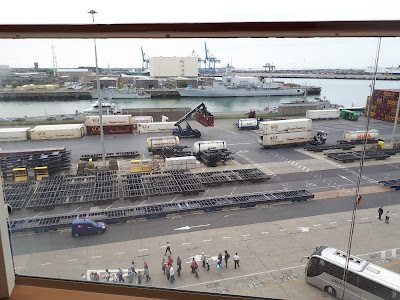 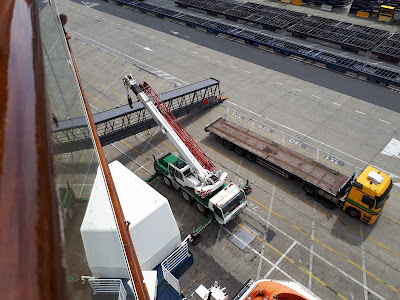 We chose to eat in the Oceanview for dinner but i don't think we (Richard and I) will make a habit of it as the food is fine but the main dining room is much nicer.

We gave the show a miss as it was a juggler and that didn’t really appeal to us so instead we tried out one of the bars. 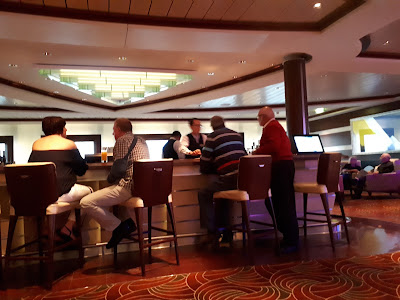 This is what we found when we returned to our cabin.  My nightie is not very special but our Cabin Steward, Leroy, had made it look so nice.  There was also a chocolate on each pillow. 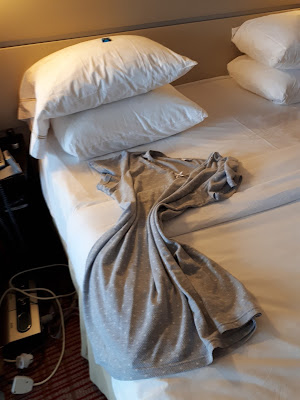 Posted by Linda Gifford-Hull at 18:02