Our last two days on the wonderful Celebrity Eclipse but there was no time for moping!

This is our cabin. 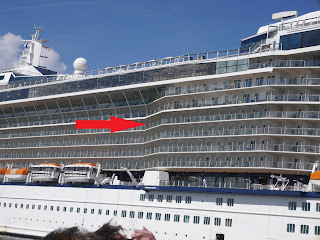 We had breakfast in the main dining room for a change and very nice it was too.  Then we were off to the Theatre to hear a talk from the Cruise Director John Grantham.  John had spent 20 years as a film stuntman before joining Celebrity in 2008.  He gave a short presentation and then it was a Q & A session.  It was very interesting but the stunt that sticks in my mind is that he once jumped 65 feet! 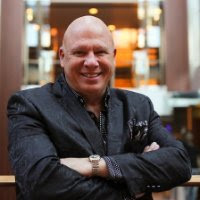 Next it was the Captain, Michael Sympouras’s, turn to talk.  Captain Michael told us about how Eclipse is steered using azipods - an electric podded azimuth thruster developed in Finland.  Azipod is a marine propulsion unit consisting of a fixed pitch propeller mounted on a steerable gondola ("pod") which also contains the electric motor driving the propeller!  Eclipse also has three bowthrusters.  Navigation is done by echarts but Celebrity insist that paper charts are also on hand when entering and leaving ports.  The ship weighs 121,878 tons, is 1,040 feet 6 inches long, 120 feet 9 inches wide, draws 27 feet 3 inches and has 17 decks.  She can travel at 24 knots or 28 mph and carries a crew of about 1,271 and can carry 2,850 passengers.  Eclipse is as long as the Eiffel Tower is high!  There are always two officers and two able-seamen on the bridge at all times – even in port.  All the bridge crew meet before each leg of the cruise so they are all “singing from the same hymn sheet”!  A ship as big as Eclipse must have a pilot on board whilst entering and leaving port. 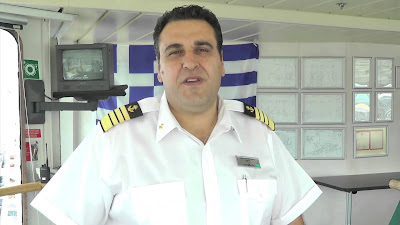 Penny and I did a spot of shopping on the Shops on the Boulevard.  There were a few “expensive” bargains to be had!

After lunch it was time to relax before our final chic night.

Dinner was another special one with lobster on the menu. 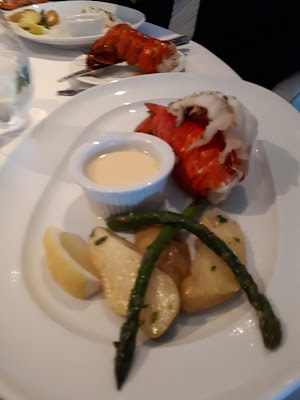 These are the ladies who shared our table.

Nancy and her daughter Debbie. 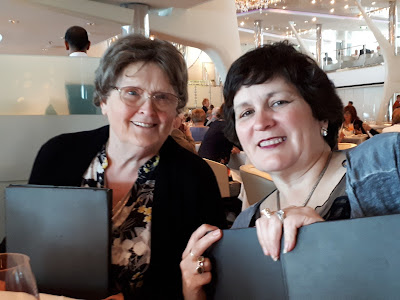 And Iris and Ann. 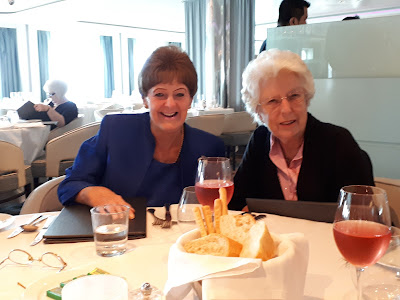 And then there was us! 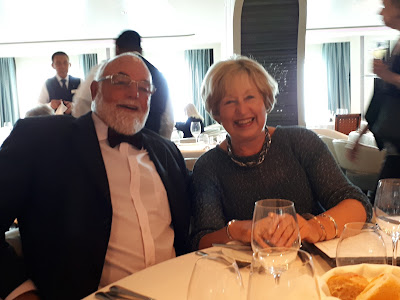 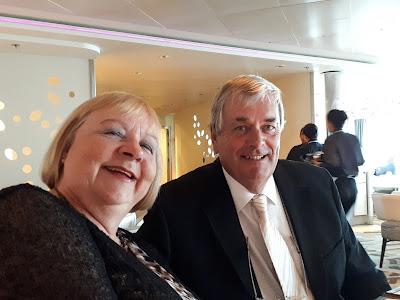 After dinner we adjourned to the Cellar Masters Bar before retiring.

“The sea is the only embodiment of a supernatural and wonderful existence” Jules Verne
Posted by Linda Gifford-Hull at 10:09