I met this cheeky squirrel in the gardens at The Peterhof.  He obviously thought I had food! 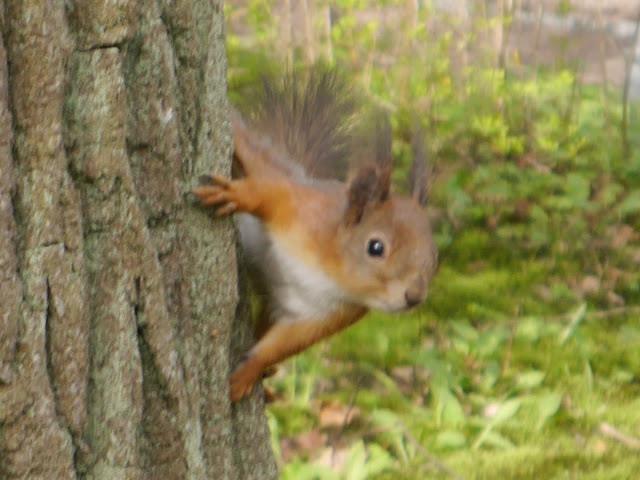 Day 2.  I was truly amazed at The Peterhof and Catherine's Palace that they had both been almost destroyed during WWII.

The Peterhof was used as barracks and for target practice. Before retreating, the Germans set the palace ablaze.
After the Soviets retook Pushkin "the Catherine Palace presented a terrible scene. The great hall, the picture gallery and the gala staircase had all collapsed... The Amber Room had been stripped and the gala rooms gutted by a fire... A most terrible sight was Rastrelli's vista of golden doorways, now reduced to raw bricks laden with snow. Cameron's classic suite of rooms was not destroyed but had been much vandalised"

I have put this day first as both Penny and I thought it was the best day - such a shame that Richard and Jim didn't see it.

Main memories of the day.  The early start!  The express breakfast.  The good and empty roads.  The inside of the Peterhof.  The gardens of the Peterhof - though our early start did mean that a lot of the fountains weren't switched on.  The fountains themselves.  The Dog and Duck fountain.  The cheeky squirrel.  Inside Catherine's Palace.  The story of the Amber Room.  The fact that after the devastation of both Palaces by the Germans they were painstakingly restored under Communist Russia. The almost fisticuffs between tour guides as Kate tried, and succeeded, to get her small group to the front of the queue!  The pick-pocketer!  Our dinner in Murano. This Russian Doll!! 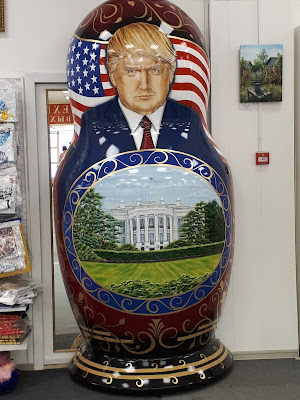 Main memories of the day.  The great long queue to go through immigration. Suddenly realising I was in Russia!  The boat cruise where I couldn't really see a thing 😞  Seeing the Rostral Towers alight bearing in mind they only tight them twice a year.  The wonderful paintings in The Hermitage.  The gold - gold everywhere it seemed.  The outside of the Church on the Spilled Blood or the onion church as I called it.  St. Isaac's cathedral - it looked nothing from the outside but the inside was a real WOW.  The queues to get through immigration again.

Main memories of the day.  The Faberge Museum - I bet those eggs could tell a tale or two!  The SS Peter and Paul Cathedral with all the sarcophagi and the tale of the two missing children of Nicholas II.  I was disappointed that we didn't get to see more of the Peter and Paul Fort.  The gun that fires at noon which can be traced back to 1703.  The pie for lunch!  Our visit to the Metro and the very long, steep escalator then to find such ornate stations.  Our sad farewell to Kate and driver Daniel.  Our dinner in Tuscan - the view as we left St. Petersburg will stay with me forever.  Watching the pilot leaving Eclipse.

The Romanov history.  I bought a book which I am determined to read as I would like to know and understand more.  The difference between the old St. Petersburg and the new.  Our amazing guide Katarina who wanted to be called Kate!  The dour Russians though they didn't seem that bad to me! The fact that we were told that St. Petersburg only has 30 days of sunshine a year - we had three of them!

Posted by Linda Gifford-Hull at 13:52