It was boat cleaning this morning ready for our visitors.  Richard’s son, James, and his girlfriend, Maisa, were coming for the weekend.  The place needed a good clean but it really doesn’t take long.  I usually start at one end and work my way through (the same as I do when packing the boat up to go home).  Richard does the hoovering and then, Bob’s your uncle, we have a sparkling boat again.

James and Maisa arrived about 12.30pm and after lunch we set off back to Offenham Lock and the Fish and Anchor moorings. 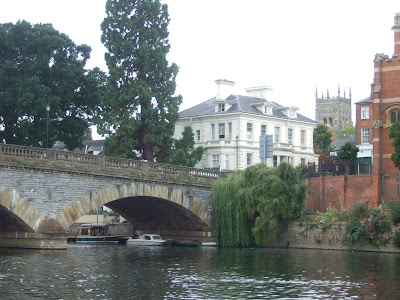 It was a lovely afternoon but sadly it wasn’t too last.  We went through the lock and the lock cutting where we had moored on Wednesday and onto the moorings.  There is room for two long narrowboats with maybe a small motor cruiser as well.  The rain started shortly after we arrived and continued – it was still raining when we went to bed.  We shared the mooring with a boat called Purple Emperor.  We thought it was brand new but apparently it is 25 years old and just had a repaint – it looks amazing.  I took this photo in Stratford as I thought it looked so lovely. 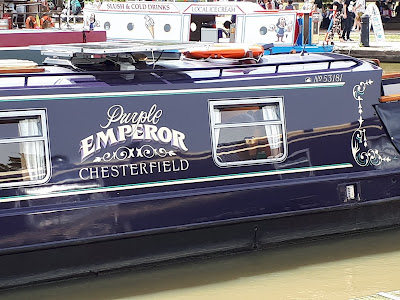 We had booked an early dinner at the pub and paddled over about 6.30pm.  We had a lovely meal.  This is James’s pizza which almost beat him! 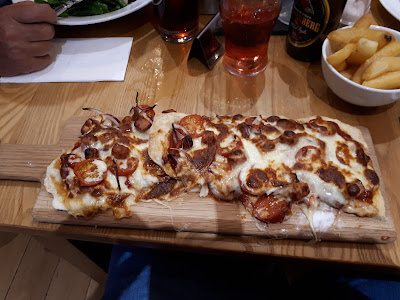 Another paddle back to the boat where we played Scrabble which, as always, Richard won.  I don’t like playing Scrabble with his as he always wins!

Offenham derives its name from the Saxon King Offa, who once resided here.  Offa was King of Mercia, a kingdom of Anglo-Saxon England, from 757 until his death in July 796. The son of Thingfrith and a descendant of Eowa, Offa came to the throne after a period of civil war following the assassination of Æthelbald.  King Offa was famous for his dyke - a large linear earthwork that roughly follows the current border between England and Wales., who is traditionally believed to have ordered its construction. Although its precise original purpose is debated, it delineated the border between Anglian Mercia and the Welsh kingdom of Powys.  The Dyke, which was up to 65 feet wide (including its flanking ditch) and 8 feet high, traversed low ground, hills and rivers. Today the earthwork is protected as a scheduled monument.