We were expecting visitors for coffee so there was house work to do – we need to have visitors more often!

Guy and Mary got caught in the traffic in Gloucester (Food Festival remember??) and were quite late getting to us.  I haven’t seen Guy for ages and hadn’t met Mary before.  We had a coffee and a good catch up before they left to go to the Food Festival.

We said goodbye to Gill and Phil with dogs Emmy and Sonny.  They are leaving Gloucester tomorrow to go up to Tewkesbury.  You never know we might see them there!  Gill and Phil are new friends and I know that they will remain good friends 😊
We left our mooring to go down to the lock but had to wait for ages.  We saw Sceptre, the British challenger for the America’s Cup in 1958, she is believed to be the only UK challenger still sailing in British waters.  Built for the Royal Yacht Squadron to challenge for the 17th America’s Cup, she has a colourful history from her early racing days to today, with members of the Sceptre Preservation Society nurturing her future and ensuring that she remains racing and cruising on the seas off the United Kingdom coastline.  Many changes were made to convert Sceptre from a fantastic racing yacht to a stunning cruising yacht, and work has carried on over the years to maintain and improve her, to preserve her for future generations.  She is obviously in Gloucester for more renovation work. 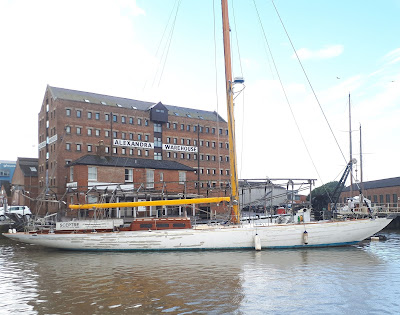 We also saw Halycon who was commissioned by the Lancashire industrialist Sir Samuel Turner in 1929 and he kept her until 1944. Below deck the original teak saloon and main accommodation have been preserved perfectly throughout her long life.  During the war we believe she was requisitioned by the navy and spent some time as the flagship of a minesweeper flotilla based in Greece.  In 1957 she was acquired by the Warsash School of Navigation she proved so successful that the British Merchant Cadet Training School kept her for 32 years, training hundreds of seamen, many of whom went on to be masters of their own vessels and who will perhaps remember her fondly.  Throughout her life Halcyon has been involved in a number of adventures. She came unscathed through the storm which hit the notorious 1979 Fastnet race. She also raced in the Hamilton, Bermuda to Halifax, Nova Scotia leg of the 1984 Tall Ships race in which the Marques was tragically lost during a squall.  Halcyon started her new life as a luxury charter yacht in April 2007. Whether it be an Adventure Sailing trip, corporate hospitality day charter or private or family holiday, Halcyon will provide the perfect platform for your experience.  She too must be in Gloucester for more renovation work. 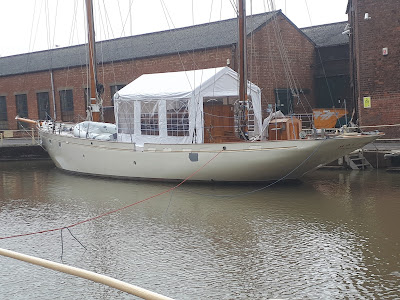 When the gates opened a narrow boat and a motor cruiser came out.  As we went in the Lockie said that the narrow boat hadn’t told him they were coming and then missed the lock and were heading off down the river to the weir.  He said that he had to pull them back!!  The lock has a bridge going over it which doesn’t need to be moved unless there is a high boat coming through. 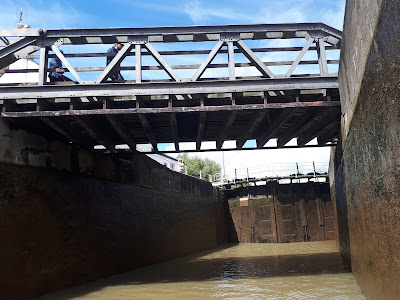 There was a lot of debris as we came out of Gloucester Lock and it was a question of steering round it but other than that it was an uneventful journey.  Upper Lode Lock is huge and I felt quite lost down in the bottom! 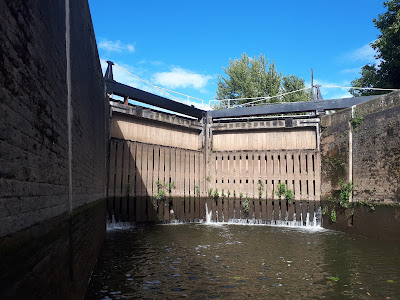 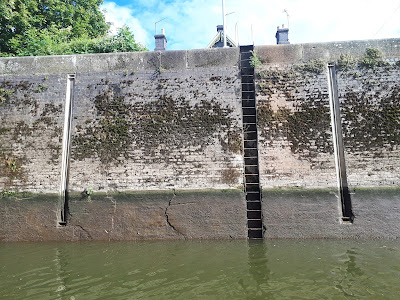 We went through Avon Lock and onto the River Avon and reversed down to moor by Quay Bridge.  It was late so I walked up the road and got Dominos pizzas – they were lovely and hot as it was such a short way from the boat.

We moved up the river to Tewkesbury Marina where we are leaving Mary H for a week while we go home.  I need some Granny time and we are having a family barbecue on Saturday. 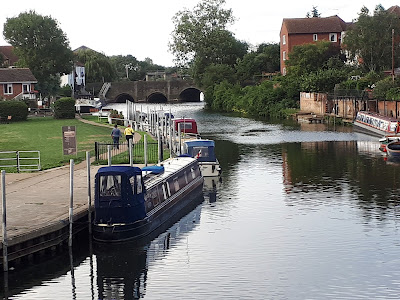 There was a lot of cleaning to be done, and deep cleaning at that, as when we return to Mary H next Monday, 7th August, we will be having VIP guests!