Monday - We finally managed to break out of the marina! The forecast wasn’t good but we really had to go for it.  We stopped for diesel and to empty the elsan on the new services pontoon.  The elsan emptying “thing is a bit space like!  I could imagine the International Space Station having something similar.  The diesel is a fast filler and it was done in no time.  The power of the water on the pontoon was very good too.

We made a right turn and headed to Braunston.  We realised that even though it was raining spring is here with the lambs and the pussy willow.  There is also some blossom poking through. 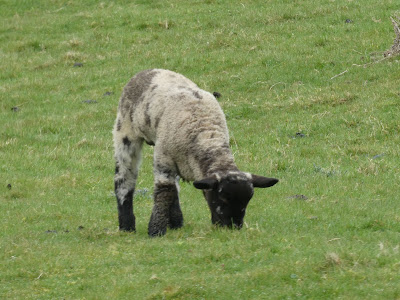 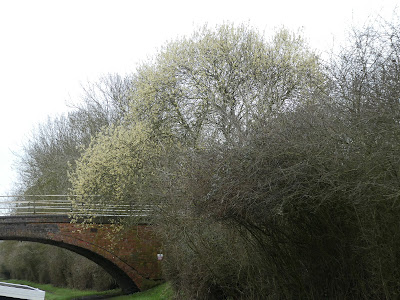 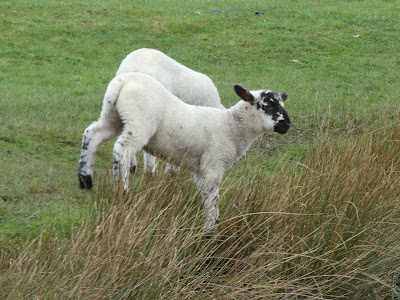 We took a right turn at Braunston Junction and went under the beautiful pair of cast-iron bridges built by Horseley Ironworks in 1834. The bridges have low graceful arches which stand as proof that materials such as iron and the technique of mass production need not result in ugliness.

Horseley Ironworks were built near the Toll End Communication Canal on the Horseley estate, which had been sold by their owner at the turn of the 19th century due to demand from engineers wishing to profit on the construction of the BCN Main Line through the estate. The date when the ironworks were constructed is unknown but is believed to have been by 1815. Industry in the area prospered and the location retained the name of the Horseley estate as shown in an 1822 survey of the area.  With the increasing popularity of canals, the ironworks quickly became popular for manufacturing canal bridges, mainly in the local vicinity. Canal bridges made by the ironworks include the Engine Arm Aqueduct (1825), two roving bridges at Smethwick Junction (1828), Galton Bridge (1829), and Braunston Towpath Bridges (1830). By the end of the canal construction era, Horseley Ironworks had emerged as one of the most prolific manufacturers of canal bridges in the West Midlands region, especially in Birmingham. 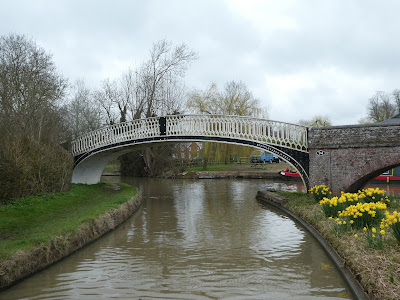 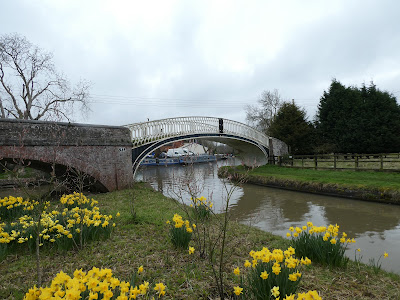 I wonder if the person who managed to get across to the triangle of earth between the bridges to plant the daffodil bulbs realised how pretty they were going to look. 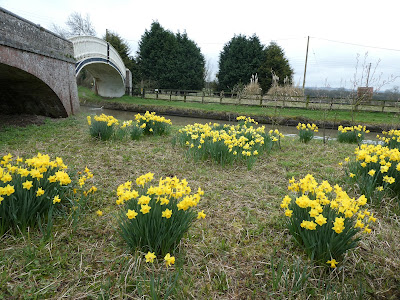 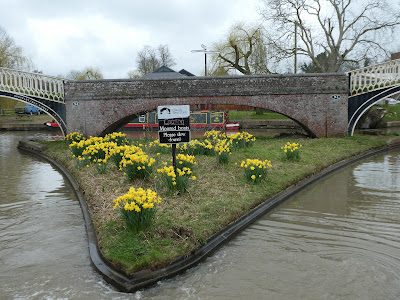 In 1768 the Oxford Canal was formed to link the Coventry Canal at Longford, via Banbury to Oxford, then to London via the Thames.  However, in1793 it was decided that a shorter route into London was needed and the Grand Junction Canal was built from Braunston to London – it was completed in 1805.  Then, in 1929, the Company amalgamated with the Regent’s and Warwick canals to form the Grand Union Canal Company.  So where does that leave me with the name of this stretch of canal.  The Oxford Canal was here first but was this bit the north or south?  The Grand Junction Canal only went as far as Braunston and the Warwick Canal started at Napton so in my mind this stretch is not part of the Grand Union.  This is definitely the Oxford Canal and that is what I a going to call it.  The IWA also calls it the Oxford Canal so I am in good company.

Our goal was Bridge 100 which is one of our favourite mooring places because of the views over the countryside.  The trouble is that it is beginning to be the favourite spot of a lot of boats now!  However we were first here and have a lovely view.

Tuesday – nothing to blog about today.  It just rained and rained all day.  I didn’t even poke my nose outside☹