It’s my birthday!  I’m not saying how old I am but it’s half a big one!  I had a lovely Facetime with Tobyn - and Robert and Laura of course and another Facetime with Victoria as I opened the goody bag she had given me.  Richard gave me a lovely star fish necklace which he had hidden in the depths of the boat!  Bearing in mind we left home a week before my birthday I had seven cards to open 😊 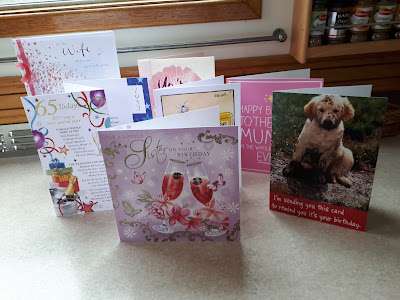 We woke up to the rain hammering down on the roof but by 11am it had stopped and we were underway – destination The Folly at Napton for dinner.  Richard said that it was cold as we cruised along so I stayed inside in the warm!  Even Muffin was shivering and had to have a coat on. 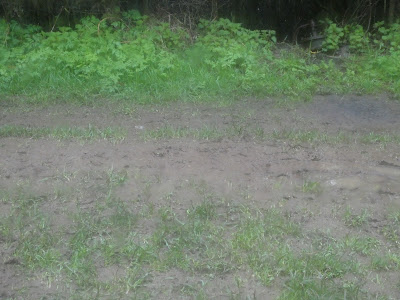 It was such a grey afternoon, so I immersed myself in transferring scribbles onto a spreadsheet for our holiday in Spain next year!  The scribbles were from a few weeks ago and really needed sorting while they were freshish in my mind.  I find that if I don’t look out of the window and think about sun and holidays it doesn’t feel too bad!

I had to put my wellies on to go to the pub and was terrified of slipping over!  I changed into shoes to go into the Folly but I don’t think I need have bothered!  On our table was a beautiful bouquet of flowers from the children and my sister. 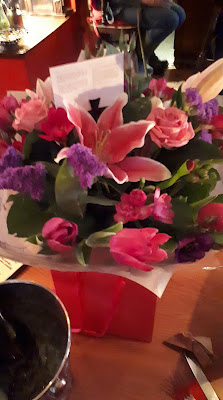 I love the Folly with it’s eclectic collection of bric-a-brac.  I'm just glad I don't have the job of dusting it all! 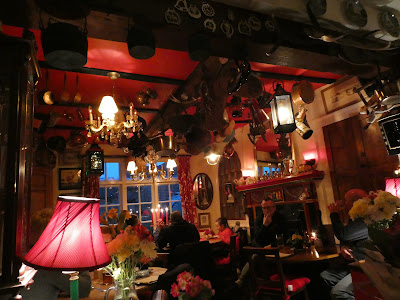 It was then back to the boat.  I have to say that it wasn’t the most exciting birthday I have ever had – if only the weather had been better!

I think I have managed to delete the webring – I would appreciate feedback if it appears again.  Thanks Tom for your help 😊

Posted by Linda Gifford-Hull at 12:43