The first thing I need to mention is that there will be 6,200 houses in Houlton not 62,000!!  An anonymous blog reader put me right.  I thought that it was a hell of a lot of houses, but it still didn’t sink in that I might have made a mistake!!

We were a bit tardy in getting away this morning, but we are in no rush to go anywhere!  We need to set off for home on the 24th but until then we are just pootling along!  People who know us will find this very strange as we are always heading somewhere, and we don’t usually hang around.  I will never forget Sue on No Problem XL writing in her blog that we were using the Thames as a motorway (or words to that affect)!!

The sun was shining, and I had a burst of energy.  I made some soup, did some washing and ironing and cleaned the bathroom.  Yes, I know, people don’t iron anymore – but I’m afraid I do as I really don’t like creased clothes!!

We stopped on some visitor’s moorings near Brinklow for lunch, but it was so nice that we stayed put.

The Oxford Canal through Brinklow was completed in 1778. However, by the late 1820s, the extravagant winding contour route of the Oxford canal had become outdated. It was said that boatmen with their horse-drawn boats could hear the sound of Brinklow church bells ringing for morning and then evening prayer on the same day! 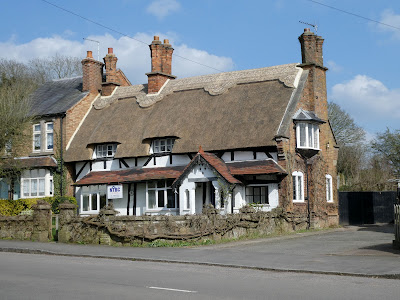 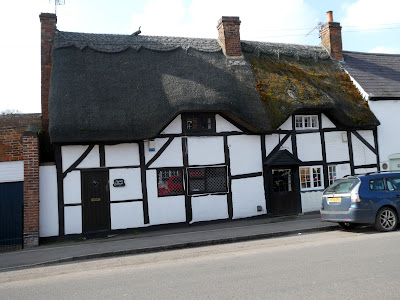 We took a stroll into Brinklow – it was a bit further than I thought it would be.  I’ve been having so much trouble with my knee that I was a bit worried but no problems at all 😊 As we entered the village we saw a sign for a deli that did coffee so headed in that direction, sadly it was just closing up but the Post Office was open and they did lovely ice-creams -Muffin was given a treat too!

We couldn’t go into Brinklow without visiting the Motte and Bailey castle.  These castles were constructed first by enlarging existing mounds, or creating new ones, the earth thrown up by digging the moats and ditches being used to heighten the mound and the ramparts. The Brinklow castle, which dates back to the 12th Century, has a mound which rises some 40 feet above the natural rise of the land, and about 60 feet above the bottom of the moat, which is approximately 40 feet wide, and some 20 feet deep. The outer bailey was higher by some 10 or 20 feet than the inner courtyard, and would have been crowned by an imposing wooden palisade - strong pointed stakes used in a close defensive row. A second ditch and rampart would have separated the inner from the outer bailey. On top of the mound would have been a watchtower, reached by a ladder, which in dire emergencies, would have been used as a last refuge, and almost certainly there would have been some kind of drawbridge between mound and outer ditch, supported on two, or perhaps three wooden tiers. 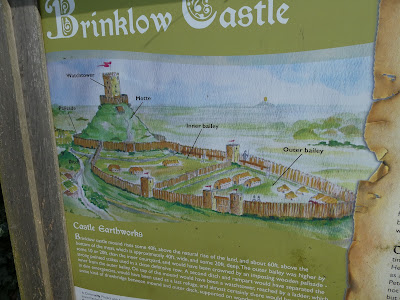 Muffin found four rabbits to chase but they were faster than him! 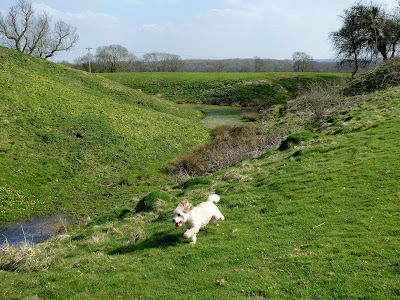 These are just a couple of random photos of the castle site. 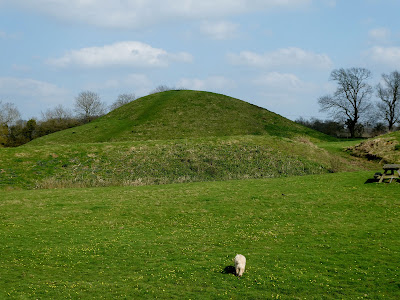 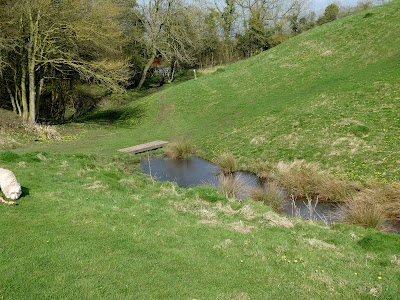 You may or may not know that Richard had a quadruple heart bypass 18 weeks ago and yesterday he climbed up the motte and said that he wasn't even puffed - amazing! 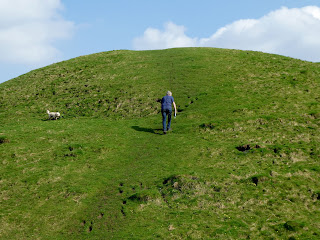 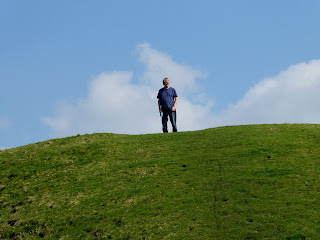 Back at the boat we opened a bottle of sparkling wine and drank it on the deck – it was so warm and sunny.

Posted by Linda Gifford-Hull at 11:45