It looked as if it was going to be a hot one when we woke up this morning.  We had a quiet morning as we had the Hatton flight to do in the afternoon. 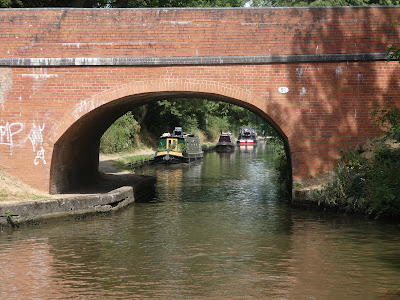 At about 3pm John came and said he was ready to go.  The students had been into Warwick to have a look around and were back promptly at 2.45pm.  My steering partner from Tuesday, Anneline, was at the helm again which was good and the first eleven locks went very smoothly but then John decided that a change round was needed and things went a bit downhill after that!  Genevieve was first to try and she just couldn’t get the hang of getting into the lock with another boat and at one stage I ended up with my bow in the bank where she had knocked me!!  John did persevere with her and tried to show her where she was going wrong but, sadly, she just couldn’t get the hang of it.  Then it was the turn of Max who decided that going fast into the lock was the way to do it but he soon got the hang of it and finally it was Emily’s turn and she took to it straight away but by that time we only had four locks left to do!  We had six people on the locks – two going ahead to set the next lock, two ready to lift the paddles in the lock we were in and two to shut the gates and close the paddles.  It worked really well – I had set the timer when we went through the first lock and we did it in 2 hours and 20 minutes.  If Anneline had steered all the way I reckon we could have knocked that 20 minutes off!  We didn’t see another boat on the flight – one good thing about leaving late.  We said goodbye to Triumvirate’s crew at the top – they are travelling back to France tomorrow.  We cruised on until we found a nice shady spot and sat out eating pizza! 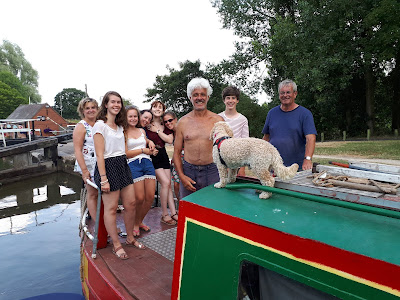 I’ve spent a lot of time today looking at the name Triumvirate and decided to look it up.  It would appear that it comes from ancient Rome and is a group of three men holding power, in particular (the First Triumvirate) the unofficial coalition of Julius Caesar, Pompey, and Crassus in 60 BC and (the Second Triumvirate) a coalition formed by Antony, Lepidus, and Octavian in 43 BC.  Wikipedia has a page of famous Triumvirates if you are interested. 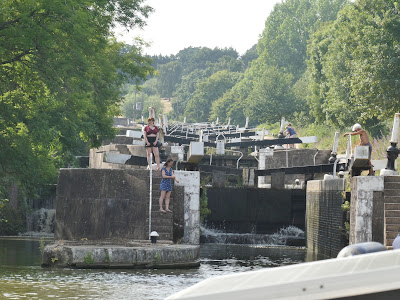 Warwick was originally the junction of the Warwick & Birmingham Canal with the Warwick & Napton Canal.  An act authorising a canal from Digbeth to Warwick (Warwick & Birmingham Canal) was passed in 1793. The canal was to end at Saltisford wharf and was originally to have been wide enough for narrow boats only. However, the building of the Grand Junction as a barge canal changed that. Trading began on March 19th 1800 and the cost had been £160,000 (just over £9 million in today’s money). The Warwick and Napton Canal was authorised by an Act of 28 March 1794 as the Warwick & Braunston Canal. The line was later changed to join the Oxford Canal at Napton, authorised by an Act of 14 May 1796. Formally opened on 19 December 1799 but actually open for trade on 19 March 1800.

The canals were opened simultaneously and were initially prosperous but were badly hit by competition from the Fazeley-Coventry-Oxford Canal route to London, and later by the railways, this, despite the opening of the Birmingham and Warwick Junction canal in 1844 and the link to the Stratford on Avon Canal in 1802.  The authorisation of the London and Birmingham railway in 1833 affected the two Warwick canals in particular as they were essentially link canals with relatively little local traffic. By 1845 the railways were offering to buy the canals and by 1849 the canal company was in receivership. They struggled on with greatly reduced capital. 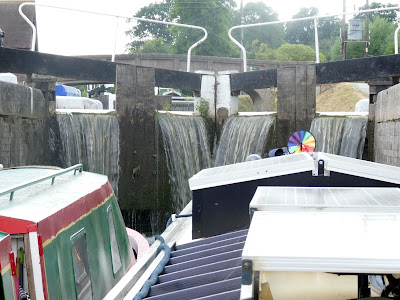 The first step towards the creation of the Grand Union was taken in 1925. In 1926, the Regents Canal Co. agreed to buy the Grand Junction Canal subject to them purchasing the Warwick Canals. A year later, the Grand Junction had agreed to do so, though for convenience the actual purchase was carried out by the Regents Company. In November 1927 the name "Grand Union" was suggested for the new company. Regents agreed to pay £62,258 (just over £3.5 million in today’s money) for the Warwick & Birmingham Canal and £8,641 (just under £306,000) for the Warwick & Napton. In August 1928 the Acts were obtained and the new company came into existence from the 1st January 1929. Vast sums of money were spent on converting the canal from the top lock Camp Hill to Regents Canal Dock in London into a Broad Canal, so that it could take boats to 12 foot 6 inches wide.