10 locks ahead of us today on a hot but cloudy day.  We arrived at Bascote top lock to find the gates open and nb Dawn ‘til Dusk waiting for us 😊  We then travelled through all the locks with Paul and Bob finally saying goodbye at Radford Bottom Lock (I’ve often wondered where Radford Top Lock is!!)  It took us 2 hours 20 minutes to do the 10 locks. 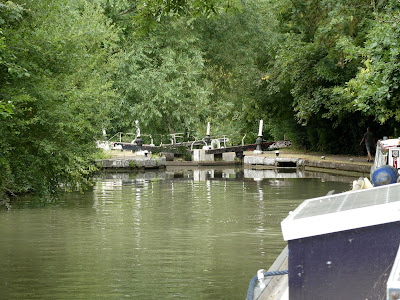 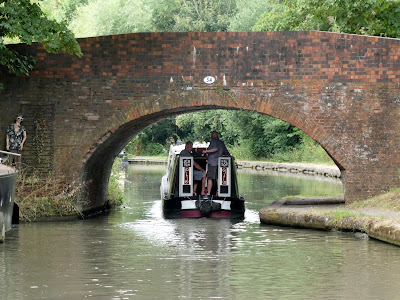 As we passed the Fusilier Pub the day boat, Saltie, suddenly decided to do a pirouette in the middle of the canal.  Somehow, he managed to get himself across the canal right where a boat was moored – he crashed into the boat twice!  As we passed him I asked him what he was trying to do and he said go straight along the canal!!!  Saltie belongs to the Saltisford Canal Trust and was built locally in Warwickshire and is designed to enable everyone to get afloat regardless of mobility.  The 35 foot long boat is wider than a narrowboat at 9 feet, making it very stable and is extremely manoeuvrable.

We stopped at Emscote Bridge in Leamington/Warwick so that I could top up with fresh food.  Our next shopping stop will be Stratford-upon-Avon and we don’t intend to rush there.

We travelled on to the two Cape locks and we had to do them ourselves!!  There was one mooring place left where we wanted to be above the locks so we grabbed it.

We went to the Cape of Good pub for dinner.  It was very busy but they have tables on the lockside so we took one of those.  We were a bit worried that, with it being so busy, we would struggle to get service but there were plenty of people working so it wasn’t a problem though we did have to wait quite a while for our food but that didn’t matter as I Facetimed my grandson, Tobyn, who had just got out of the bath!

The Cape of Good Hope is well known in Warwick and gives its name to an area of the town.  It was originally a beer house and was listed as such in 1881 when Samuel Reynolds had to run two businesses to make ends meet.  I’ve borrowed this photo from Our Warwickshire and shows the building in about 1900 followed by photo taken today. 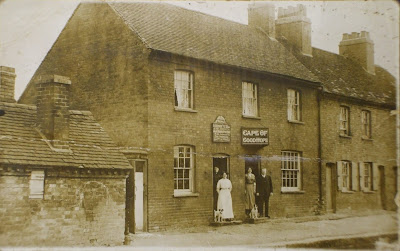 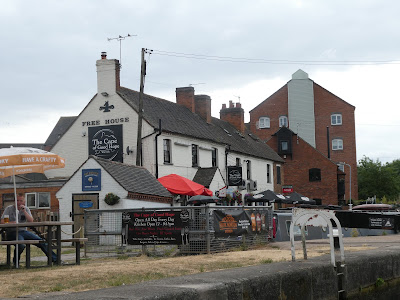