Sunshine 😊 though the forecast did say it could rain later – it didn’t!

Last night there were three other boats moored up with us and by the time I looked out of the window two had gone and the third was just going – why are we always last??  I know I don’t do mornings but ………

We stopped at the water point outside Fazeley Mill Marina and then went into the marina for fuel.  It looks to be a very nice marina but has long pontoons which you would have to reverse into and there isn’t that much space between boats on either side!  If you know Wigrams Turn Marina, then it’s narrower than that!!

We came across the interesting Drayton footbridge.  This unusual Gothic-style footbridge was probably built in the 1830s by the celebrated architect Sir Robert Smirke, while constructing nearby Drayton Manor for local MP Sir Robert Peel (later to become Prime Minister). The manor house was demolished in 1929 and later became the site of the Drayton Manor Theme Park.  The Grade II listed footbridge is located near to the entrance of the Drayton Manor theme park and is among the most ornate bridges anywhere on Britain’s canals. 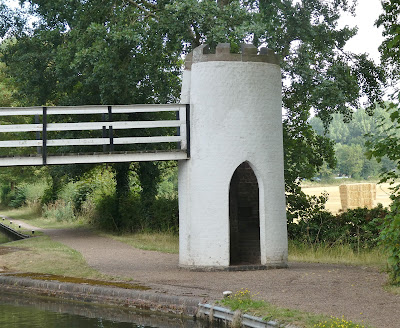 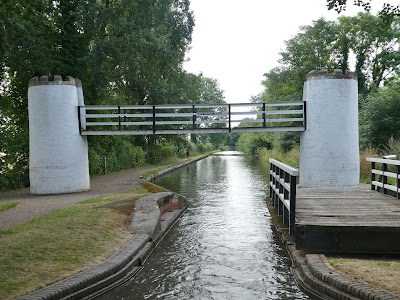 It was then Fazeley Junction where we turned right.  I have really enjoyed the Birmingham and Fazeley Canal though we only joined it at Salford Junction (11½ miles).  It was a bit grotty to start with but very soon turned into a lovely canal.  It wasn’t dirty and seemed to be well looked after.  All being well we will go back along it next year but the other way and will go to the end at Aston Junction (13½ miles). 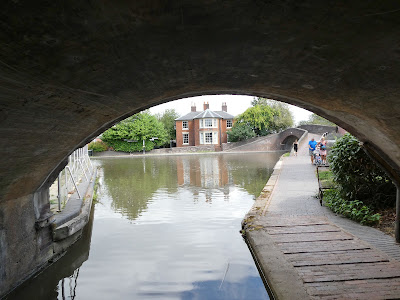 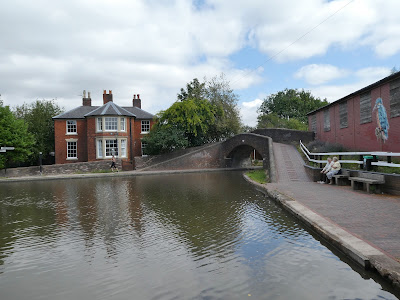 We passed this boat – I wonder how easy it is to steer! 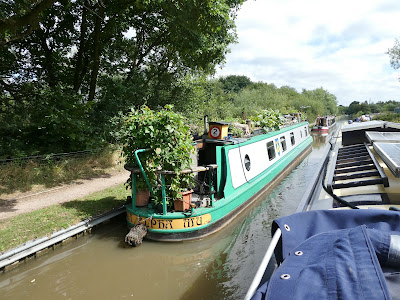 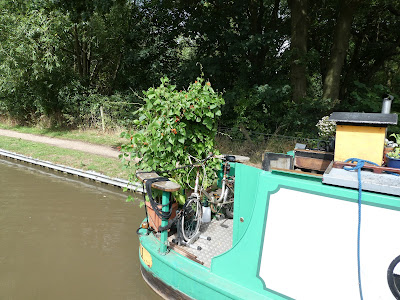 The two Glascote Locks were next on the agenda, but we were third in the queue – queue?  First one this year!!  There was only one boat coming down and I ended up doing each lock twice – once for the boat in front of us and then for us.  Next to the locks is a housing estate called Scimitar Park which is built where the old Reliant cars were built.  It closed in 1998.  The company produced up to two million vehicles over a 65 year history starting in 1935, and sold its cars in nine countries. It was the UK's second-largest British-owned car manufacturer from the 1960s to the 1990s.

Just after the locks we pulled over and I went to the Co-op which is at bridge 73.  I hadn’t been shopping for ages and almost bought up the shop!  It is a very modern well stocked shop, but they aren’t really geared up to people doing a large shop as there is no conveyor belts so it all got rather complicated.

We pulled over in the middle of nowhere – WaterExplorer says we are 0.3 miles from Alvecote Bridge – but we can’t see it!  It is a lovely spot.