We were only going to the bottom of the Atherstone Flight today to meet friends Steve and Diane on NB Clarence.  They have come up from the River Wey to go to Birmingham for dinner in Brindley Place – oh and have a holiday too!
It didn’t take long to get to Bradley Green winding hole where we turned and moored up to wait.  I kept getting messages from Steve as to where they were on the flight – they seemed to speed down!!  I reckon it was just over 2 hours.

The consensus of opinion was to go back to where we moored last night!  We wanted to have a BBQ and the tow path was nice and wide there. 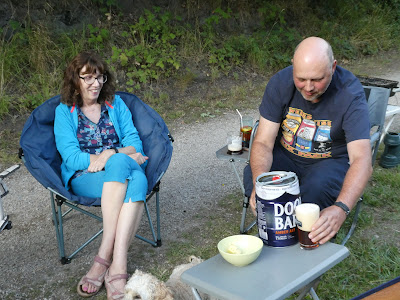 We had a lovely BBQ and catch-up – I’m not sure when we last saw Steve and Diane, but it was probably 2016.  We actually sat out on the towpath until 11.30pm – we did all have a jumper on, but it didn’t feel cold HOWEVER when I got into bed I was so cold I couldn’t sleep!  In the end I got up and got my crocheted blanket and put it over me and then fell asleep at 2am ☹

We passed through Polesworth where there are the ruins of a Benedictine nunnery. It was founded in the 9th century by St. Modwena and King Egbert. The first abbess was Edgytha (daughter of King Egbert, now St. Editha).  The Abbey was run by Benedictine Nuns and over many years the site changed. By Norman times the original timber construction had been replaced by a substantial stone-built complex of buildings.  In the 16th century King Henry VIII quarrelled with the Pope over divorcing his wife and declared himself head of the Church of England. As a result of this all monasteries were closed, the monks and nuns pensioned off, the wealth of the abbeys taking into the treasury and sadly, many of the fine buildings dismantled. By the time of Queen Elizabeth I much of the abbey stood in ruins and only a few buildings remained intact and in use.  The site of the Abbey is a Scheduled Ancient Monument, although apart from the church and the gatehouse and the restored ruins of the cloister very little remains visible. The 12th-century Abbey church, now the parish church of St Editha, is a Grade II* listed building. The 14th-century gatehouse is both a Grade II* listed building and a Scheduled Ancient Monument. It has recently been restored and renovated to provide apartments available for rent.


Alvecote Priory is a ruined Benedictine Priory. The site has been scheduled as an ancient monument.  Very little remains of the priory, most of the walls have been eroded but a fairly high wall remains on one side. The main entrance arch is the most impressive feature, still standing at around 20 feet high. The attached dovecote also survives, however both the ruined priory and dovecot are on the Heritage at Risk Register due to vandalism and water damage.  It was founded 1159 by William Burdett.  After returning from a crusade, Burdett accused his wife of being unfaithful and stabbed her, and as penance founded the monastery. Little is known of the history of this small priory, which was a dependency of Great Malvern Priory.  After two centuries the priory buildings were in poor repair and the monks gained the favour of Edward III. Protection was granted to the monks and their attorneys to collect alms in churches for the restoration of the church and cloister.
Apparently, buildings that are Grade II* (two star) are “buildings that are particularly important…of more than special interest.”