A lovely bright and sunny morning but the forecast for tomorrow is dire however the rain is really needed to water everything. 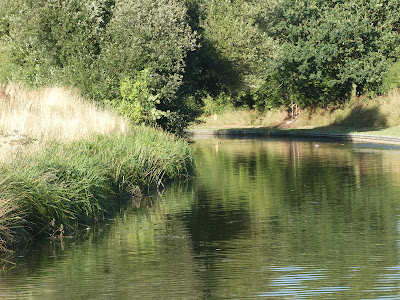 We moved up into Curdworth – I am glad we didn’t stop there yesterday as it is in a cutting which is great for a hot day but not the rainy afternoon we had yesterday.  We walked up to the Post Office and Convenience Store.  I managed to send a birthday card to the USA, but it was a shop full of nothing!  I got milk and frozen prawns but that was all. 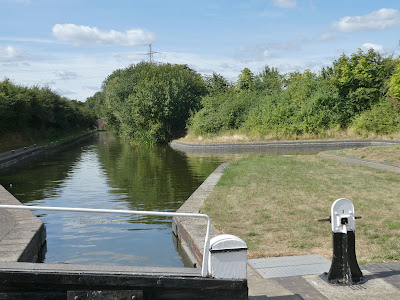 It wasn’t far to Curdworth Top Lock which had to be moved when the M6 Toll was built – while they were at it they built a nice new winding hole too.  We did this lock on our own but after that we met people coming towards us.  They are nice easy locks to work which was great as I was doing them today!  The sad fact is that HS2 is planned to go between locks 3 and 4 and there isn’t much room!  My Pearson’s guide says that HS2 will travel 64 times faster than a narrowboat! 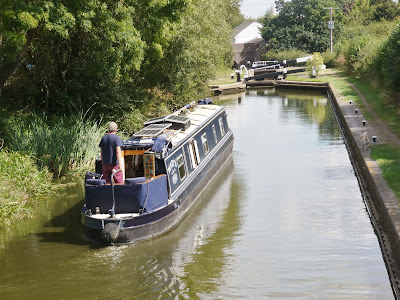 We passed the Kingsbury Water Park which is owned and managed by Warwickshire County Council. It has fifteen lakes situated in over 600 acres of country park.  It is renowned for its birdlife and is popular with birdwatchers.  The area was previously the site of gravel extraction pits that were operated by the Midland Gravel Company. The lakes were created from the craters left behind after the gravel had been taken out. The Water Park was opened on 24th May 1975 with two lakes and 123 acres. It has been expanded over the years and as of 2011 has fifteen lakes in an area covering over 600 acres. The Water Park was briefly closed to the public in June 2007 after the area was hit by the worst flooding since the 1930s. At the time it was estimated the floods had caused tens of thousands of pounds' worth of damage. The Park was opened again once the flooding had subsided. 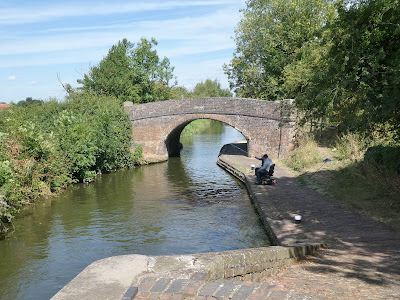 Just before we lock 9 is the Dog and Doublet pub with some really nice mooring. Needless to say, we pulled over and had a pint and a steak sandwich – well it would have been rude not to! 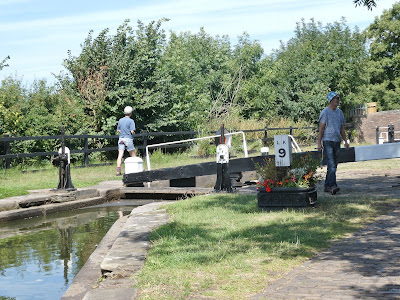 Lock 11 is the last lock on the flight and we were glad to see it – now to find somewhere to moor.  We stopped at Drayton Brick Bridge - the bridges on the Birmingham and Fazeley don’t have numbers just names.

We are very close to Middleton Lakes RSPB nature reserve which is a 400 acre nature reserve, formally opened on 19th May 2011.  Much of the site was, until its acquisition by the RSPB in 2007, a gravel quarry, operated by Hanson Aggregates.  The quarry was redeveloped as a reserve in conjunction with Hanson and Staffordshire County Council. Islands and spits were created in the former gravel pits, the edges of the pools were re-profiled to a gentle slope of 1:30, instead of the 1:3 used during quarrying, to provide greater areas of mud and thus appeal to wading birds. The large meadow is grazed by a herd of English Longhorn cattle, ensuring ideal conditions for nesting skylarks and wild flowers. 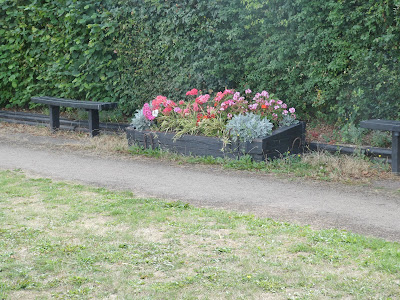 The Curdworth locks all have flowers at them - they are looking a little frazzled by the hot weather but someone must care for them, but I wonder who?

Posted by Linda Gifford-Hull at 12:38