Just the three Hillmorton Locks and some cruising to do today – easy peasy – yes?  Wrong! 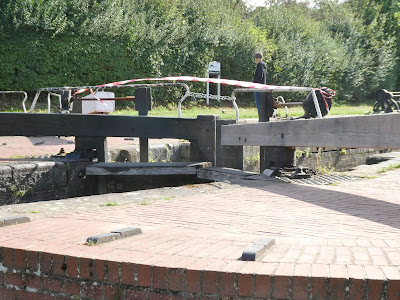 We arrived at Hillmorton bottom lock to find that only one set of locks were working.  There was a boat coming down and I walked up to the lock.  The boat in the lock was full of Scouts – not that I saw them, but the leaders were working hard.  I was told that the boys had worked hard during the week and had done all the locks, cooking and cleaning – I hope their Mothers get wind of this!!  As the boat went out Richard went in and we opened the paddles and I walked on up to the next lock.  Then it all got very chaotic.  If you don’t like moans and groans, then skip to the next paragraph!!  As I walked round the corner I could see two boats waiting.  I walked up to the lock and started to help.  I got chatting to a South African lady who was coming down, she said that there was a huge queue at the top.  Apparently, the leaders from the Scouts boats (there were three boats) were going along saying that they needed to go first as they were in a hurry – I haven’t heard that one before.  The first boat to go up was a hire boat who couldn’t swing his boat over – fortunately someone helped with a push and he eventually got into the lock.  The South African boat was next down.  On the next boat up were a couple but neither came to help.  As they left the lock the chap did say thank you but I’m afraid I reacted badly and said, “I’m not a lockie you know”.  He laughed and say, “I know”.  So, I did the wrong thing and said, “then why didn’t one of you come and help?”  I didn’t hear his reply!  As the next boat (hire) down went out of the lock he steered straight towards Mary H!  I stood and stared as he could have done a lot of damage with a head on collision into the side of Mary H.  Fortunately, he suddenly realised what was happening and went into reverse.  Richard took the opportunity to get the hell out of there and did a very neat manoeuvre and into the lock.  The poor guy on the hire boat just couldn’t work out what was going wrong (he had the tiller the wrong way).  He finally got the hang of it and went off.  I walked up to the top lock, and “Mr. & Mrs. I don’t need to help” were in the lock and guess what? They were both sitting on the boat.  I didn’t want a confrontation so walked quite slowly until they went. The top lock was plain sailing – well almost.  The boat that was coming down couldn’t get out of the lock as Mary H was at the front of the lock waiting.  One chap from the boat went to push their boat off and I had that awful feeling that as he pushed he had got past the point of no return and he was going into the drink – but he took a leap and managed to get onto the gunnel – phew!  Up through the lock, out and as we rounded the corner we could see the queue of moored boats waiting to go down the locks – 7 plus 3 that were moored.  One guy said he had been waiting for 45 minutes.  The moral of this story?  Don’t do Hillmorton locks on a Bank Holiday Saturday!!  For most of the hire boats – going both ways – it was their first lock ever which really wasn’t helping.  There was a volockie at the middle lock who said that the majority of these hadn’t a clue how a lock works!  Apparently, some hire companies send these newbies out and tell them not to worry about the locks as the Lock Keeper will help them – I wonder if this is why today’s volockie was at the middle lock! 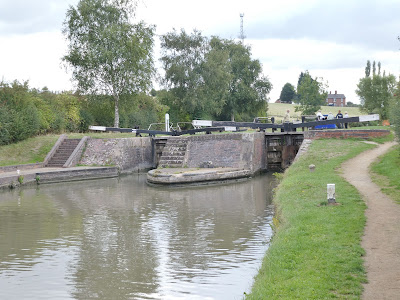 The name Hillmorton comes from the two original distinct settlements of Hull or Hulle (Hill), on the higher ground and Moor Town or Moreton, on the lower marshy ground to the south of where the church stands today.  Thus, Hill Moor Town or Hillmorton.  The Domesday Book records the population as 170.  When the canal between Hawkesbury Junction and Braunston was straightened it reduced the distance by nearly 15 miles. This immediately challenged the capacity of the flight of three locks at Hillmorton, the first on the canal after the stop lock at Hawkesbury Junction. The solution to the congestion was to duplicate or twin the existing locks at Hillmorton, creating three pairs of two parallel narrow locks, which allowed for twice the traffic to pass the lock at any time. The work to double the locks was completed in August 1840. Not only was the capacity to pass the lock doubled, but the time taken was decreased as the locks were narrower. Tests showed that the locks could be operated in as little as one minute and 20 seconds!

The journey back to Dunchurch Pools is just under 4 miles and we kept passing more and more boats heading to the locks – I hoped they were a patient lot!  We went under the M45 which was built in 1959 when the M1 (as part of a link from London to Birmingham) went as far as Junction 18. The 7.9 mile M45 was designed to dissipate some of the motorway traffic before the M1 terminated. It has one of the lowest traffic volumes of the United Kingdom motorway system.

It started to rain just before we got to the marina, so Richard pulled over and we had lunch while we waited for it to stop.  Suddenly we felt the boat move but couldn’t see anything, next we saw a big bow wave and then we felt the passing boat sucking us out.  Richard had tied the stern up with a nappy pin mooring hook and it came out!  So much for slowing down passed moored boats! 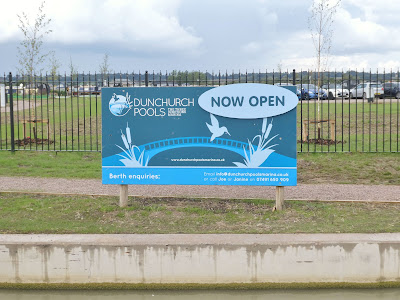 Into Dunchurch Pools and onto our berth.  Engine off, shore power on and we are home 😊  We spent the afternoon sorting, tidying and cleaning ready to leave in the morning.

Dunchurch Pools Marina has a very good service pontoon with diesel, pump out, elsan emptying (state of the art machine!) and water.  If you are passing and need any of those things then call in, there is plenty of room to turn too. 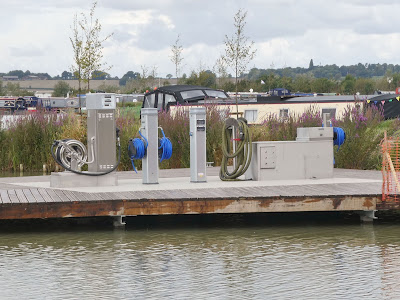