The Chronicle of Tewkesbury records that the first Christian worship was brought to the area by Theoc, a missionary from Northumbria was and who built his cell in the mid-7th century near a gravel spit where the River Avon joins the Severn.  The cell was succeeded by a monastery in 715, but nothing remaining of it has been identified.  The name Tewkesbury comes from Theoc and in the Old English language was called Theocsbury.

In the 10th century the religious foundation at Tewkesbury became a priory subordinate to the Benedictine Cranborne Abbey in Dorset.  In 1087, William the Conqueror gave the manor of Tewkesbury to his cousin, Robert Fitzhamon, who, with Giraldus, Abbot of Cranborne, founded the present abbey in 1092. Building of the present Abbey church did not start until 1102, employing Caen stone imported from Normandy and floated up the Severn. 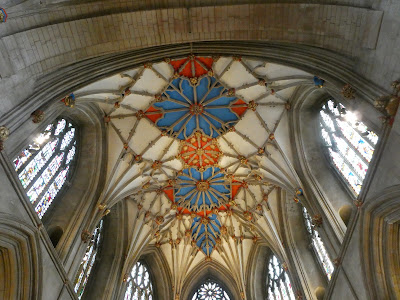 Robert Fitzhamon was wounded at Falaise in Normandy in 1105 and died two years later, but his son-in-law, Robert FitzRoy, the natural son of Henry I who was made Earl of Gloucester, continued to fund the building work. The Abbey's greatest single later patron was Lady Eleanor le Despenser, last of the De Clare heirs of FitzRoy. In the High Middle Ages, Tewkesbury became one of the richest abbeys of England.

After the Battle of Tewkesbury in the Wars of the Roses on 4 May 1471, some of the defeated Lancastrians sought sanctuary in the abbey. The victorious Yorkists, led by King Edward IV, forced their way into the abbey; the resulting bloodshed caused the building to be closed for a month until it could be purified and re-consecrated. 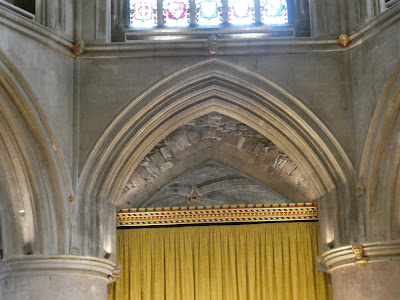 At the Dissolution of the Monasteries, the last abbot, John Wakeman, surrendered the abbey to the commissioners of King Henry VIII on 9 January 1539. Perhaps because of his cooperation with the proceedings, he was awarded an annuity of 400 marks and was ordained as the first Bishop of Gloucester in September 1541.  Meanwhile, the people of Tewkesbury saved the abbey from destruction. Insisting that it was their parish church which they had the right to keep, they bought it from the Crown for the value of its bells and lead roof which would have been salvaged and melted down, leaving the structure a roofless ruin. The price came to £453.

The bells merited their own free-standing bell tower, an unusual feature in English sites. After the Dissolution, the bell-tower was used as the gaol for the borough until it was demolished in the late 18th century.

The central stone tower was originally topped with a wooden spire, which collapsed in 1559 and was never rebuilt. Restoration undertaken in the late 19th century under Sir George Gilbert Scott was reopened on 23 September 1879. Work included the rood screen, which replaced the one removed when the Abbey became a parish church. 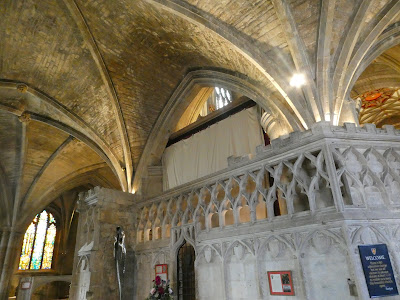 Flood waters from the nearby River Severn reached inside the Abbey during severe floods in 1760, and again on 23rd July 2007.

1087 - Work begins on what will become the present building. in 1121 the Abbey is consecrated by the Bishop of Worcester assisted by four other bishops.  The present building replaced a Saxon Church and monastery, of which no trace remains.

1400s - The East End of the Abbey in extensively remodelled. The Norman wooden ceiling is replaced by Lierne vaulting; the Despenser, Fitzhamon and Beauchamp chantries are built, and the stained glass is installed about the Quire.

1471 - Battle of Tewkesbury, 4th May. The Lancastrian Army, led by the Prince of Wales, Lord Wenlock and the Duke of Somerset, was defeated by the Yorkists, led by Edward IV, Richard of Gloucester and George, Duke of Clarence. This was a pivotal battle in the Wars of the Roses.  Edward, Prince of Wales, was buried in the choir of the Abbey and although the exact site of his burial is not known there is a brass plaque of commemoration in the floor of the choir.  The Golden Suns at the East End of the choir were installed to mark the Yorkist victory. The golden suns under the Tower are 19th century copies added by Gilbert Scott in 1878.

1540 - At the Dissolution of the Monasteries the Abbey was dissolved and all its valuables seized and placed in Henry VIII’s coffers. The Abbey was purchased by the townspeople for £453, the price of the lead on the roof and the metal in the bells, to become their parish church.

1559 - The Abbey tower was topped by a lead covered wooden spire about 30m high. In a great gale on Easter morning 1559 it blew down. Fortunately, little damage was done, and no-one was injured.

1737 - The Milton Organ was moved to the Abbey from Magdalen College, Oxford. It is called the Milton as, while installed at Hampton Court Palace, it may have been played by the poet John Milton who was Latin Secretary to Oliver Cromwell.

1875 - Sir Gilbert Scott, the English Gothic Revival architect, took charge of a plan to supposedly restore Tewkesbury Abbey to what he thought it ought to look like. This restoration caused a high-profile war of words, as the textile designer and social activist William Morris publicly slated the project.

1971 - The Queen distributed the Royal Maundy Money to 90 persons – 45 men and 45 women in recognition of their contribution to the community and to the church.  Each recipient was given two small leather purses by The Queen, one red and one white. The first contained a small amount of ordinary coinage which symbolised the Sovereign’s gift for food and clothing. The second purse contained Maundy coins up to the value of the Sovereign’s age. The coins consist of 1, 2, 3 and four pence silver pieces.

1992 - Two contemporary works of art were purchased for the Abbey by The Friends of Tewkesbury Abbey – the altar in St Catherine’s Chapel “I am that I am” by Bryant Fedden, and the statue behind the High Altar “Our Lady Queen of Peace” by Anthony Robinson.

2002 - The Denny Windows are installed to commemorate the 900th anniversary of the arrival of the monks from Cranbourne.  The theme of the windows is Laborare est Orare – To work is to Pray – which comes from the Rule of St Benedict, the laws by which Benedict’s followers lived.

Posted by Linda Gifford-Hull at 08:04