Yes, I am back on Mary H 😊  I drove up this morning from Devon – it was a very good run but I don’t think I have ever seen so many caravans on the road before.  Richard had got to the bottom of Lowsonford Lock and was slowly filling with water as I arrived – I hasten to add that there are two taps!  We quickly unloaded the car with my stuff and then reloaded it with James’s.  We were lucky that there was a parking place just down the road to leave the car for a short time.  Richard and James took Mary H through the lock while I tried to fit my food shopping into the fridge!  Richard and James then drove our car over to Dunchurch Pools where James’s car was and then James dropped Richard back on the boat.  Meanwhile I unpacked and tried to get back into boat mode!

I hope you have enjoyed your history lessons?!  Over breakfast this morning Penny said that she was going to test me on my blog posts!  I’m not sure how much I can remember, and I certainly can’t remember the dates – I can’t even remember what day it was yesterday, let alone 400 years ago! 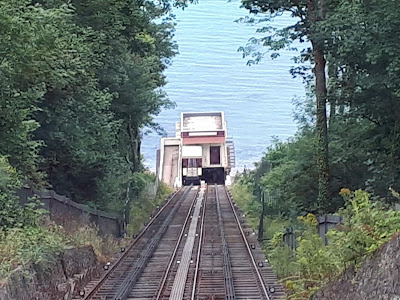 Amongst the things I did last week with Penny and Jim was go to Babbacombe, somewhere I have never been to before.  We just had to go on the Cliff Railway which was built in 1926 and has shuttled hundreds of thousands of holiday makers to and from Oddicombe Beach in over 90 years of service.  In 1923, the Torquay Tramway Company announced the intention to install a lift to Oddicombe Beach and Waygood Otis appointed to undertake the installation.  Work started in December 1924 and the Babbacombe Cliff Railway completed in 1926 the line cost £15,648 to construct.  The tramway company worked the line until the 13th March 1935 then it was taken over by Torquay Corporation for the sum of £18,000.  In 1941, the line closed due to wartime restrictions and the beach sealed off. The line did not reopen until 29th June 1951 at a further cost of some £10,000 for refurbishment.  In 1993, the track was replaced, and the lift reopened in 1995 - the Mayor conducted the opening ceremony.  Sadly, in 2003 an accident occurred when the safety gear operated halting the lift car in mid travel position requiring the rescuing of passengers. All passengers were evacuated safely and after being closed for 6 weeks the railway was reopened.

We also went to Ottery St. Mary and walked to the old mill.  The Mill was built in 1788-90 by Sir George Young as a serge (cloth) factory at a cost of £40,000. It had the largest water-wheel in England which was taken out about 75 years ago. Electrical components etc were made there during the 1950s. It is a Grade II listed building.  The tumbling weir is a circular weir that allows water from a leat or man-made stream to reach the River Otter.  It is apparently a rare design in that the water enters through a circular opening at the top that is surrounded by the stream. The water then cascades down some more smaller rings until it enters a culvert which enters a tunnel under the nearby path before sluicing down to the river a few metres away. 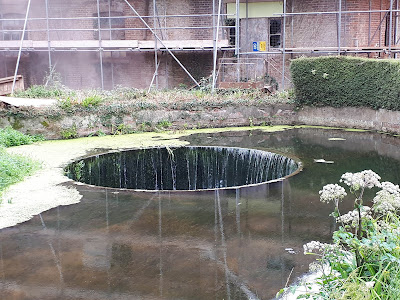 We also saw this crazy gate!  It opens and closes but you can’t go through it! 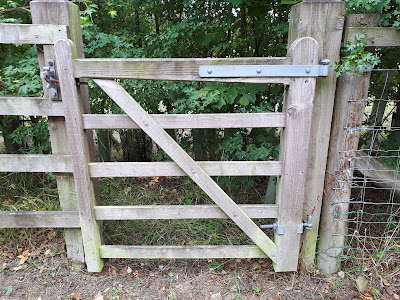 I had a lovely week with Penny and Jim and I hope that James enjoyed his father and son bonding time!

This evening we met up with my cousin, Simon, and his wife, Deb, along with my Aunt and Uncle and Deb’s father.  We were in the Fleur de Lys of course!  Sadly, the meal was not of the usual standard, but they were very busy and had been even busier during the afternoon, but that shouldn’t really be an excuse.  However, the company more than made up for the meal 😊  I love catching up with family.