It was now time to head south and back to Dunchurch Pools.  We still have a week left but at this stage I always have mixed feelings.  I enjoy being on the boat as much as being at home - well maybe its 60%/40% (to being at home) but I miss things at home.  I have been away for 5 weeks (it will be 6) and I have missed my little Grandson so much. He is now 23 months and so gorgeous (I know I am biased but right!!)  We try and Facetime once a week but it’s not the same as a big cuddle.  The last time I saw him he ran to me for a cuddle when he got out of the car – my heart did a big flip 😊

As we were preparing to leave Great Haywood there was a knock on the boat and it was Brian from NB Harnser 😊 They had spent the night at Tixall Wide and, thanks to Messenger, knew where we were.  He had sped past us twice before, unable to stop, so it was really nice to finally meet him properly albeit briefly.  They were looking for somewhere to moor so we swapped places – a great bit of reversing Brian! 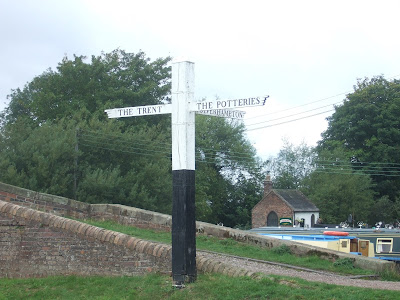 We winded at the junction and headed back to Haywood Lock.

The bridge at the junction is Grade II listed and scheduled. The bridge is of the familiar vernacular brick construction built in a ‘dog-legged’ style and is unusually wide, to accommodate narrow boats turning at the junction.  We crossed it yesterday and it is a real nightmare to walk on as it is steep and studded with bricks so that in the days of horse drawn boats the horses didn’t slip.  I took this photo from the top of the bridge looking down the Staffordshire and Worcestershire Canal – this is another canal we haven’t been on for a long time but, all things being equal, we will be on it next year. 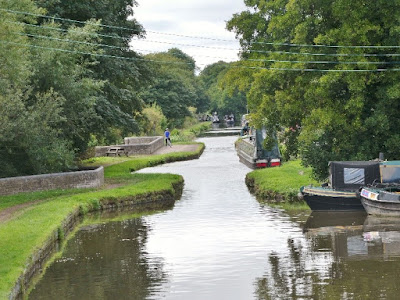 Down through Haywood Lock – I took this photo yesterday from the bridge over the lock. 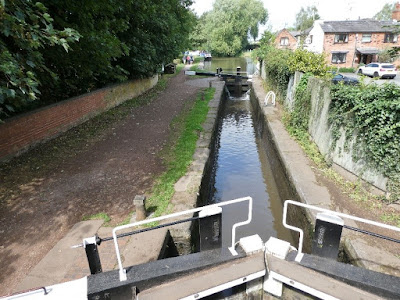 I’m writing this part of the blog as we leave Colwich Lock.  There was a queue in front of us to go down – we were the third boat.  Another boat came in behind us with Grandparents and Grandson (14ish) onboard.  Grandma and Grandson got off the boat walked down to the lock and sat at a table.  They never made a move to help Richard with the lock at all.  As I was leaving the lock Grandpa came down with windlass and was going to single hand through the lock – except someone from the boat behind him came and helped.  Even if Grandma wasn’t fit to do a lock I really don’t think that teaching a teenager that not helping is OK - is WRONG!

We stopped in Rugeley to make good use of the facilities there – in other words I went to Tesco.  I didn’t need much so didn’t take long. 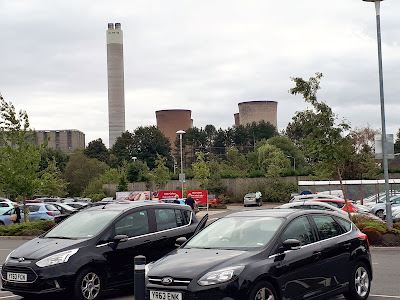 From Tesco you can see the Rugeley Power Station.  I hadn’t realised that both the power stations in Rugeley are gone or now defunct.  Construction of the A station started in 1956 and it was officially opened on 1st October 1963.  The station took coal directly from the neighbouring Lea Hall Colliery by conveyor belt - this was the first such arrangement in Britain. The total cost of building it was £30 million.  Construction of Rugeley B power station began in 1965, with completion of the station in 1972. With both stations in operation, in 1983 850 people were employed at the stations.  The two stations were initially operated by the Central Electricity Generating Board, but following privatisation in 1990, were handed over to National Power. The Lea Hall colliery was closed on 24th January 1991, meaning all coal burned in the stations needed to be delivered by rail.  A couple of years later the closure of the A station began. Two of the station's generating units were decommissioned in 1994, with the other three following in 1995. Having burned nearly 42 million tonnes of coal in its lifetime, the station was demolished later in 1995.  In March 2012 Rugeley Power Ltd announced it would be considering a conversion to run using biomass fuel but two years later the plans were scrapped.  In February 2016 it was announced that the power station would close in the summer of 2016. An announcement by owners, Engie blamed a deterioration in market conditions which included a fall in market prices and increasing carbon costs. Rugeley Power Station ceased all operations on Wednesday 8th June 2016. Decommissioning began in June 2016 and all buildings and structures on site are due for demolition lasting until around summer 2019.  So, this time next year a similar photo could be very different.

We found a canoeist in the water, but he was very adamant that he didn’t need any help – I guess embarrassment probably had something to do with that!

Through the Armitage narrows but this time I had to walk up which was just as well as boat coming towards us was not going to stop to see if all was clear. 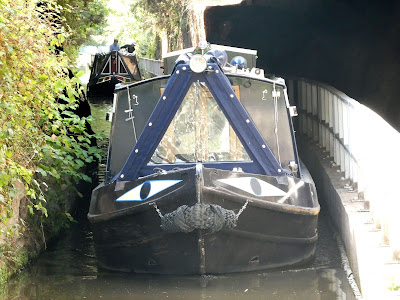 We pulled over .02 of a mile from where we stopped on Thursday!

Posted by Linda Gifford-Hull at 10:53