We had a nice lazy morning and then our friends came to ask us out to play!!  OK, so Gill and Phil came, and we went to the pub (Clifford Arms) for lunch!  The food was OK, and we sat outside along with the wasps ☹

On our way back to the boat we took the dogs for a swim in the River Trent.  To get to the other side, where the beach is, we had to cross Essex Bridge, the longest remaining packhorse bridge in England with fourteen of its original forty round span arches left.  It spans the Trent 100 metres downstream of its meeting with the River Sow.  It was built in the late sixteenth century by the Earl of Essex a favourite of Queen Elizabeth I. The Earl lived nearby at Chartley Castle. The bridge is a Grade I listed structure, a Scheduled Ancient Monument and has been described as "perhaps the least altered old bridge in the county.” 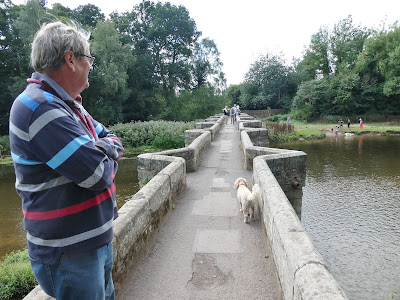 Muffin had a great time chasing a stick into the water and swimming back with it – it’s the first time he has had a swim since we left home.  Emmy and Sonny were quite happy just getting their legs wet! 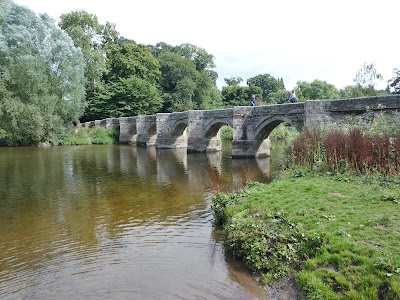 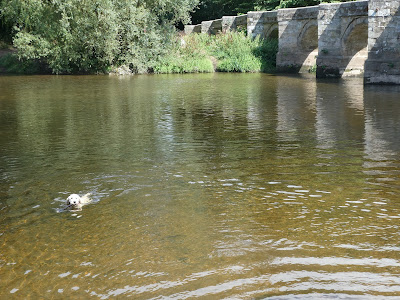 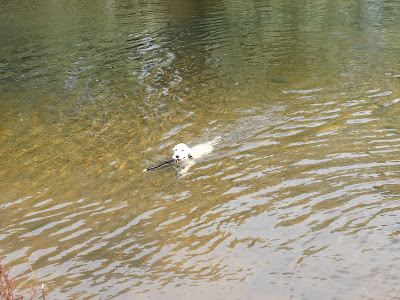 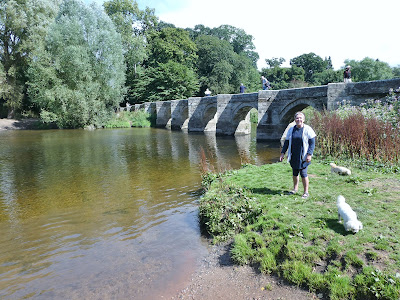 This is where the River Sow joins the River Trent. 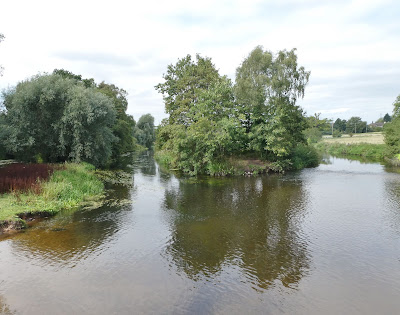 From the “big swim” we walked up to the Canalside Farm Shop.  I’m sure it is smaller than I remember it being but maybe that’s for the best as it meant there wasn’t so much for me to resist buying!

It was then siesta time before walking up to Deck of Cards for the evening.  We sat outside until it got chilly then moved onboard.  It was a lovely evening – thank you Gill and Phil for your hospitality. 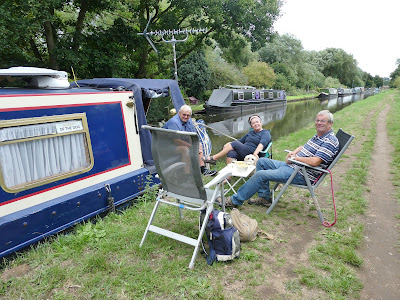 We had been to Shugborough Hall a few years ago so didn’t go this time even though it became part of the National Trust in November 2016, and we are members.  However, you know me, I like to find odd things about places!  Apparently, always on the lookout for opportunities to impress or outdo their friends and neighbours, eighteenth century land owners employed professional hermits to sit and be mystical amidst their fake temples and other follies.  In August 2002 notices appeared in press, advertising for an ‘ornamental hermit’ to take up residence at the Great Haywood Cliffs near the Shugborough estate in Staffordshire, as part of an exhibition called ‘Solitude’. The Shugborough Hermit would be required to live in a tent near to the cliffs (living inside them was deemed too risky) and only had to commit to the weekend of the 21st and 22nd September 2002. Out of two hundred and fifty enquiries from all over the world, artist Ansuman Biswas was chosen. Mr Biswas went on to spend forty days and forty nights alone in the Gothic Tower at Manchester Museum in 2009, with the aim of becoming, ‘symbolically dead, renouncing his own liberty and cutting himself off from all physical contact’.   I found this info on a website called Lichfield Lore and the writer finished off by saying “I think I’d rather run away and join the circus.” 😊