Saturday 5th January 2019
Well I finally got out of the tornado!!  On Monday I felt as if I was in the eye of the tornado - Christmas was behind me and it was too early to start packing!!  On Wednesday I entered the other side of the tornado - my new Fitbit must have wondered what was going on!  I am a list person and made copious lists when we got back from Spain two years ago, I followed them except the clothes list - I’m sure we have too many again!!  We decided to pack everything (except for one suitcase) into collapsible crates and I found someone selling nine good quality ones on eBay and I only had to go to Southsea to get them - result.  It worked really well however I’m not going to let Andy and Roly, who helped us pack the car for our return trip in 2017, see the car this time as thy thought we had a lot of “stuff” then!!  There are times that I wish I could travel light! 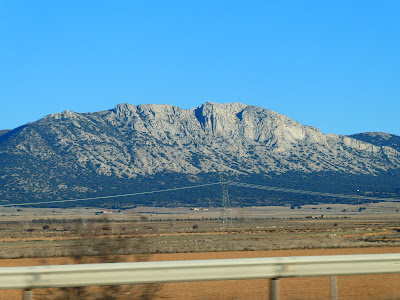 Anyway Saturday finally arrived and after I had finished the packing Richard had the job of fitting a quart into a pint pot.  He was very concerned that there was too much but he got everything in and we had a little more space but I didn’t fill it!  I blame the dog as we have got food for him for the whole time we are away as he has a special food which we can’t get in Spain.  Still the box will be useful for all the goodies I buy while we are away.

Our ferry wasn’t until 23.30 so we sat around waiting to leave.  I got bored at 20.30 so we travelled the 11 miles to the ferry port in Portsmouth.  We were able to check-in but then had to sit and wait until about 23.00.  Etretat is an Economie ferry and it is!  We had an inside cabin but as all we wanted to do was sleep it was fine - we have been spoilt on the cruise liners!  We were tucked up by the time we set sail but I didn’t sleep well - I kept getting cramp and having Muffin on my bed didn’t help!

Sunday
We docked at 08.30 (European time) and were on our way by 09.00.  Two years ago the satnav decided, in its wisdom, not to take us on the motorways and we went miles out of our way.  We now use Google Maps on my phone and put it onto the car's screen - it is so much better than either the Tomtom or the car’s satnav.  Anyway we pulled into a service area and discovered it was the same one we had stopped at 2 years ago! 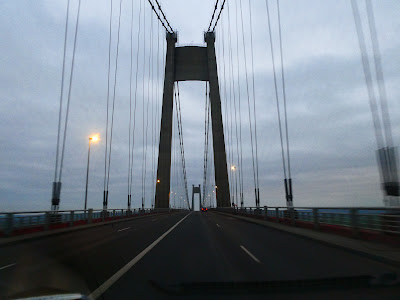 The drive down through France was long and grey, it was Sunday and the roads were very quiet.  We came across a speed deterrent that we hadn’t seen before.  We passed under a gantry that said 130 - rappel.  Shortly after there was another gantry with a digital screen, at that point a car overtook us and his number flashed up on the screen saying that he was going too fast!!  Trouble is that he was probably going too fast to see it but hopefully it might jog others into remembering about their speed as the long straight road just lends itself to speeding. I like to use the cruise control on roads like that.

We found our hotel in Cestas or at least we could see our hotel but couldn’t find the way in! The road system was like a go-kart course and all the No Entry signs seemed to be in the wrong place.  On our third time round we saw what looked like the right road in and it was.  The hotel is new and very nice indeed.  We were welcomed by a receptionist who had excellent English, which is always helpful.  Our room wasn’t huge but we had plenty of space and the bathroom was big with a decent sized shower.  We had been told about a dog friendly restaurant a short walk away on the other side of the motorway.  The menu wasn’t extensive but we both chose a homemade burger, well done, which was delicious.

Back at the hotel Richard went to bed early and, as usual, I played on my iPad until it died about 11.15pm.

Monday
Muffin woke us up and when I looked at the clock it was 8.45am!  I guess our body clocks thought it was 7.45am but I had still had a good 9 hours sleep - unheard of!  The beds in our room were so comfy which I think helped a lot. 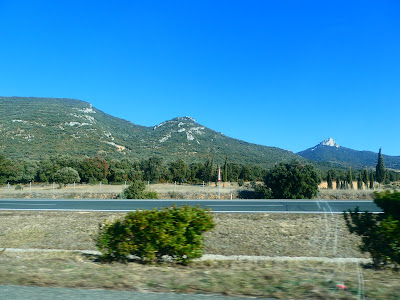 We got away just after 10am and headed on south in the grey weather.  We reached the Spanish border and about 20 minutes later we found the sun which stayed with us for the rest of the day 🌞. It was cold and there was a nasty north westerly wind but the sun was SHINING!  It started to get warmer - up to 8 degrees even when we were at the highest point of 3300 feet (about the same height as Snowdon). 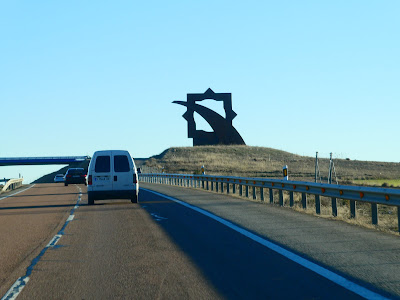 As we drove along we saw lots of large planes in a field, it looked a bit like a graveyard but doing some research some are waiting for refurbishment and some are just waiting for the chance to fly again.  They are in fact at Treruel airport - a grass strip!  What a come down that must have been for planes that might just have landed at some of the greatest airports in the world! 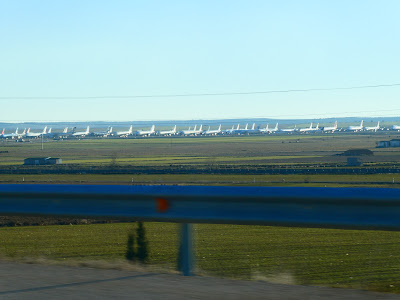 Google maps got us to our “hotel” - I’ll call it a hotel but that is a loose term!  If I hadn’t seen a photo of it I would never have known it was where we were going to stay.  There was no sign outside - just the name, Casa Rural Del Carmen, on the wall.  It was also the other side of a large, locked gate.  I rang the bell three times before Senora came out.  Then the fun began as she spoke no English and our Spanish is very minimal!  We went inside and she tried to explain something but instead of speaking slowly she rattled on and we had no chance of catching the odd word.  Then suddenly she rushed out and came back with a woman in full motorbike gear who, fortunately, spoke fairly good English.  Senora had been trying to explain that there is no breakfast but we didn’t mind as we had our porridge pots.  Senora took us up to our room and was still rattling on in Spanish - I managed to grab the odd word so nodded and said “si” a lot!  Our room was very basic and cold - the radiators weren’t on 😟. I had chosen the place as it had a kitchen so we were able to heat our microwave meals up which was a bonus.  I’m afraid we won’t be going back there but can we can thoroughly recommend the hotel in Cestas.

Tuesday
The first part of our journey today was cold and high but then we started our decent to the Mediterranean.  Sadly the first sight of it is over an industrial area but hey, the sea was blue and the sun was shining - what more could we want!!  Google maps took us away from the usual route and we did a fair few miles on an ordinary road before hitting a brand new road, the A33, we could see that it was the first section of a much longer road - maybe next year the whole thing will be open. 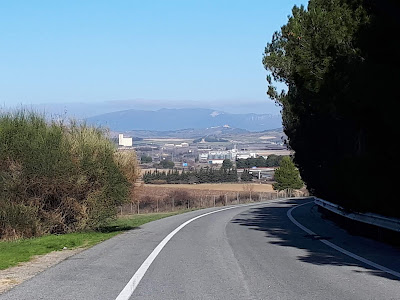 Suddenly there were police in the road directing the two lanes of traffic into one.  We could see further on that a lorry had turned over.  There was just enough room for HGVs to get passed thank goodness otherwise we could have been stuck there for ages.  As we passed the overturned lorry we could see the driver walking about, so fortunately he was OK but on the other side of the lorry there were oranges everywhere! 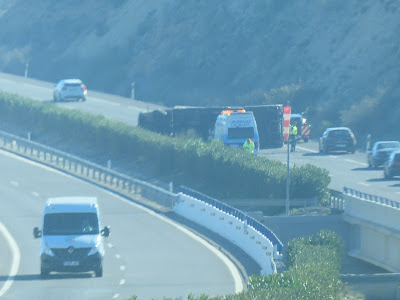 We watched the miles go down and before we knew it we were turning off the main road and we could see Mojacar Pueblo.  We had been to our villa last March for a look round so we knew where we were going.

I'm going to finish here as this post is about the journey.  Watch this space for our fun and games (yeah right) in Mojacar.  I won't be blogging every day - probably every third or fourth.

Posted by Linda Gifford-Hull at 11:34