Spain 2019 - Unpacking and catching up with friends

Tuesday continued
We arrived at Claravista 1 early afternoon and were met by the owners, Sandy and Richard Goldfinch.  We were given a walk through and then we had the car to unpack.  The drive down to the house is very steep and unfortunately Richard knocked the caravan electrics off the car as he tried to reverse down and grounded (we haven’t used the drive since!)  We had food to eat for dinner, so we didn’t need to go shopping so I spent the afternoon unpacking and sorting while Richard took poor Muffin for a well deserved walk. 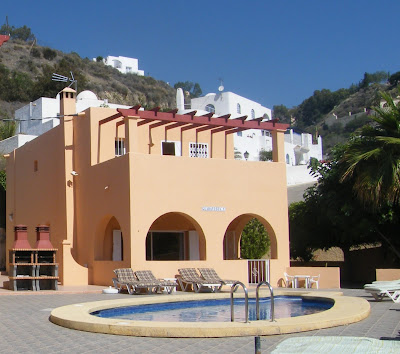 Wednesday – 9th January
The day time temperature, at present, is about 15° to 17° in the shade but about 24° in the sun however it does get cold at night.  We are fortunate as we have some electric radiators and a gas heater – there is also a wood burning stove which we might just make use of, but the bedroom was cold.

The last two times we have been to Mojacar we have had real problems with the TV, so we had arranged to rent a special box which works off the fibre optic cable – the internet speeds here are so much better than at home.  We met Sandy and Richard at the shop and got everything organised – we now have 4,500 channels for all over the World!!!  I’m looking forward to catching up with Eastenders in Romanian!  One of our daily habits is to have tea in bed in the morning and watched BBC Breakfast.  We brought a small TV with us and Richard (Goldfinch) spent a lot of the day setting it all up for us.  Sandy and Richard are great landlords and all-round nice people 😊 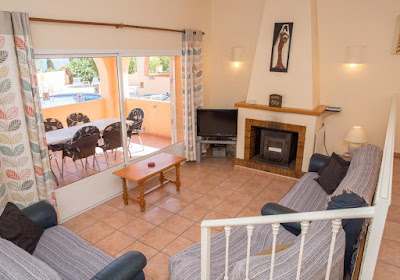 In the afternoon we went to the supermarket to stock up on fresh food and then I had to find places to put it all.  The villa is very well equipped but that means that every kitchen cupboard is utilised! 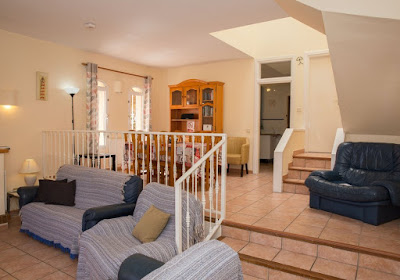 In the evening we went to Torre Bahia, a restaurant we hadn’t tried before, to meet up with Sue, Andy, Bev and Roly.  We had, in fact, only seen them in October when we were caravanning in Shropshire but hopefully, we will get to see a lot more of them over the next few weeks.  The food was excellent, but the company was even better 😊 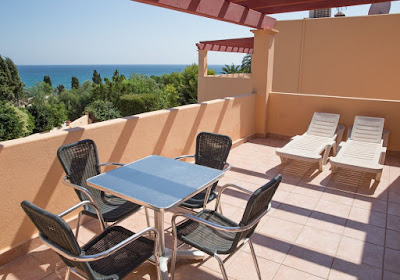 Thursday – 10th January
I woke up with a cold though fortunately it wasn’t a pouring one, but my throat just felt so dry.  We had planned a quiet day – Richard read while I did some washing and caught up with the blog.

I had been really cold in bed last night and as Sandy had said there were some electric blankets we could use I took her offer up!  Electric blankets and Spain don’t really seem to go together!!  Sue was saying that they have bought hot water bottles – so it’s not just us!  The trouble is that with the clear sky it does get cold at night. 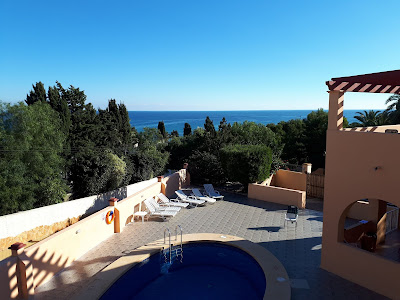 Friday – 11th January
I was nice and warm in bed last night.  Richard said he didn’t want an electric blanket but I noticed that his feet were on it when I got into bed!

Friday is always Turre market day and usually everyone meets up at the Indian tapas place but a) it’s closed at present and b) Andy now has a cold too (no I didn’t give it to him!) so there was no socialising.  We walked up the market to sus out the stalls and then walked back down.  I bought a roast chicken for dinner plus fruit and veg from the same stall I have used before.  The grapes were a little expensive but absolutely amazing!  After Turre we went up to Vera to the Iceland shop to stock up on some food for the freezer.  We drove a route we hadn’t done before but to be perfectly honest most roads look the same – however on our way back to Mojacar we went a short way on a new road and could see that there is more road building going on.

In the afternoon I wanted to visit the most amazing shop – it sells everything!  It’s called Brico Centro Lopez Fernandez.  I knew it’s opening hours are odd, but I got it completely wrong!  It opens at 9am and closes at 2pm then reopens at 4.30pm until 8.30pm – they obviously enjoy their siesta!  My 3pm visit didn’t work at all!

The chicken that I had bought was really nice - €6 for a cooked chicken which will last us for two meals.

I’m still stuffed up with my cold.  My sister had one over Christmas and it’s taken her almost three weeks to get over it – great!!