We had a busy day ahead of us – it’s been a fairly quiet week, so it was a bit of a shock!  We had to be down at one of the rental agencies at 10.30am to view a house for 2021.  However, when we arrived, we were told that we couldn’t see it as the person living there was ill.  To be fair I had missed a phone call from a Spanish number, but the person hadn’t left a message.

So, we changed our itinerary around and gave the car a birthday!  Inside and out!  I have to say that the vacuum we used was excellent – not like the ones in UK garages.

Next stop was Turre for the market, more gin and the vet.  Victoria had bought a ring while she was here and one of the stones had fallen out.  There was nothing they could do about it, but I will have to bring in back next January and they will replace the stone.

Then to the vet for Muffin to have his exit check.  The only trouble was that, even though I had picked up all his papers before we left, his passport was in the safe with ours!  The vet still checked him over and passed him fit to travel but we will have to go back tomorrow to get the passport stamped.
Back at the ranch it was proper packing time!  By 4pm it was all done, and the car packed too.

As everything was packed and cleaned, we walked down to Kukis for dinner before turning in for our last night in Claravista 1. 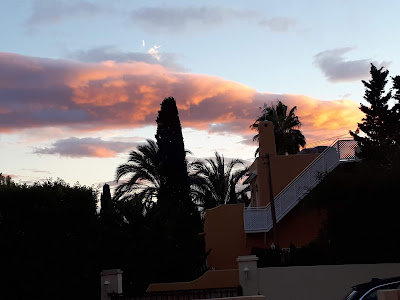 We were up bright and early to finish the last bits off though sadly Mojacar was crying for us and we got a little wet!  (It was only the second rain that we had had in 75 days.)  Phil came round to pick up the food that we weren’t taking home – there was quite a bit of it!  I had arranged with Sandy and Richard for them to come at 9.15am to collect the keys.  As I felt that I had finally finished doing everything, I looked at my watch and it was 9.15am!  We said our goodbyes and headed off but only as far as Moca as we were going to have a good breakfast to keep us going.  We had arranged to meet Liz and Phil there which was a nice way of leaving.  But we still weren’t on our way as we had to go up to Turre to get Muffin’s passport stamped.  We then set off and headed north.

It was a six hour drive to Tarragona so we split it into three and I drove the middle two hours.  We had music on, and one record had a tambourine on it.  I was driving and it just sounded as if the tambourine was being played in the back of the car which gave me the giggles imagining Muffin sitting there bashing a tambourine.  I laughed until tears ran down my cheeks – not a good thing while driving at 120 Kph!!  I guess you really needed to be there to see the funny side!

We arrived in Tarragona and found the hotel quite easily though the roads were very narrow - I know how much Richard hates cities and narrow roads so I was a bit worried, but he kept his cool!  We got what we needed out of the car and took the car round to an underground car park. 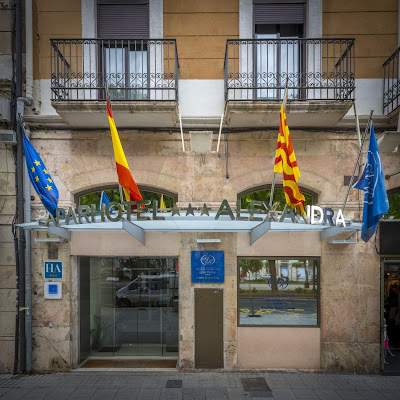 Back at the hotel we took our stuff up in the lift to the top floor.  The lift was very small,l so we had to go up and down more than once.  Richard was in the lift with the cool box and didn’t realise that the door would open on the other side.  Somehow, he managed to trip over the cool box and knock it over causing the lid to come off!!  Richard very rarely swears but he did – loudly!  I just hope the people waiting to go down didn’t speak English!!

We unpacked, sat on our balcony with a glass of bubbly, then went for a walk down the Nova Rambla to try and find something to eat.  We were both so tired that we couldn’t decide what we wanted so ended up by going into Dominos Pizza and taking our pizzas back to the hotel.  For both Tarragona and Perpignan I had chosen apart’hotels as we were staying for more than one night, this meant that we had a fridge, hob, microwave and sink – they worked very well especially with having Muffin. 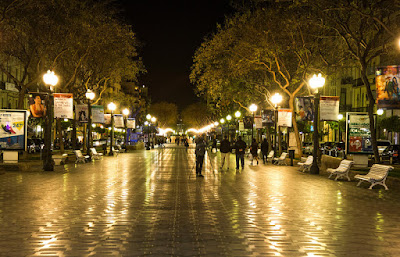 We sat on the balcony eating our pizzas at 8pm – it was warmer than the evenings in Mojacar!