Today saw our “holiday/way of life” really come to its end.  We packed up the car and started our drive to Bourges.  It was a lovely day, as have all the recent days, with blue sky and sunshine.

After a couple of hours, we came to the Millau Viaduct.  Two years ago, it had been shrouded in mist and we couldn’t really see anything but this time it was magnificent.  It’s quite hard to see down from a car as you are driving along so we stopped at the viewing area and walked up to the viewing point. The bridge is a cable-stayed bridge that spans the gorge valley of the River Tarn. In a Franco-British partnership, it was designed by the English architect Lord Norman Foster and French structural engineer Michel Virlogeux. As of November 2018, it is the tallest bridge in the world, having a structural height of 1115 feet. It was built over three years, formally inaugurated on December 14th 2004, and opened to traffic two days later on December 16th.  It cost approximately €394 million (£336 million). 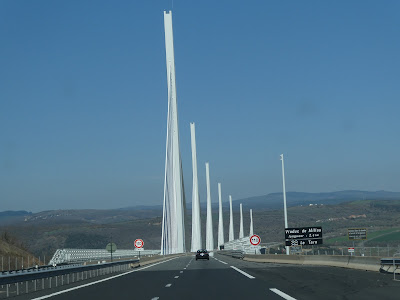 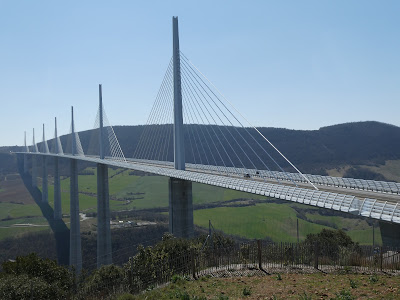 The road is very high in the area of the Massif Central, the highest we noticed was 3,250 feet above sea level. 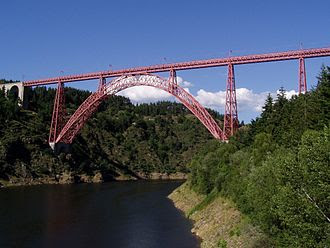 Muffin kept sounding a bit upset but would then settle down again.  I realised that this coincided with my ears popping and, yes, it seems that dogs’ ears do pop!

We followed Google maps into Bourges to our hotel.  I was rather surprised as to where it took us, but we went in and then discovered it was the wrong hotel!  It was an Ibis but the Ibis Styles that we wanted was about 10 minutes away.  I think I know what happened.  The Ibis Styles was programmed into Google but I must have just typed in Ibis Bourges which had brought up the wrong one ☹  Anyway we finally got to the wrong one and had a seamless check-in.  The Styles hotels are the latest Ibis innovation and are rather bright with quite a small bathroom but for an overnight stay it was fine.  There was also good parking and we could see the car from our window.

The hotel we went to was just off the road we were travelling on and there were three restaurants on the same plot.  We chose the Grill Courtepaille as we had been to one on our way to Spain back in January and we knew that they allow dogs in.  We had an OK meal before turning in for the night.

Posted by Linda Gifford-Hull at 10:38