We both slept well with the benefit of a good bed.  The shower should have been good but it kept falling down!  We chose to have breakfast in the hotel which was rather pricey (€10 each) for what it was.

Muffin had obviously had enough of all the driving and was very whiny.  We had to stop three times for him – just in case and I have to say that twice he did need a poo!I’m going to put these two photos of Muffin in here as I like them! 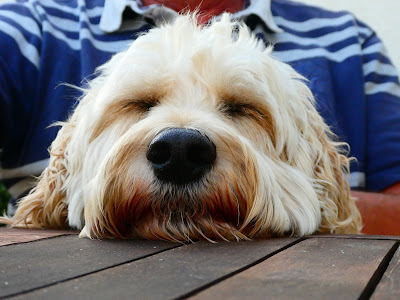 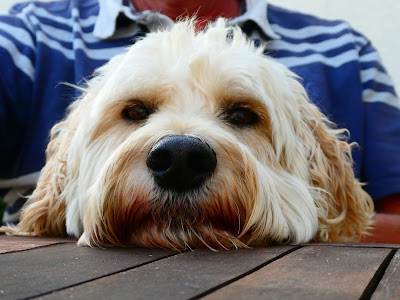 I was trying to finish my Tesco delivery order while we were driving along and was getting very frustrated with it as it seemed to have two orders on the go – one with a delivery slot and the other without.  Once I realised this, I just deleted the wrong one and it then became easier.

As we got to the outskirts of Paris, we took a wrong turning which turned out to be a very good mistake.  We were in a tunnel which was part of A86 and is the world's longest urban motorway tunnel (6¼ miles of continuous tunnel), which was opened in two parts in 2009 and 2011. The tunnel is limited to a height of 6 ft 7 ins and commercial vehicles, as a result, are prohibited.  There was hardly any traffic in it which made things so much easier.  There is one junction in the tunnel which we needed to take which brought us out onto the A13.  I’m not sure if it was quicker or not but it was a lot less hassle! 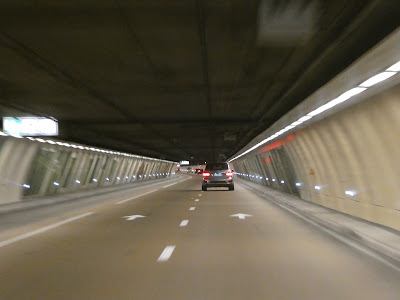 It didn’t seem to take long to get to the outskirts of Le Havre.  Richard saw a gantry sign which said something about a road closure and then suddenly Google maps was directing us down a side road.  We didn’t do that which was a mistake as I guess it was trying to reroute us as we were soon stuck in a queue where two lanes were merging into one then we were all being turned round onto the other carriageway.  I let Google take us and it was going so well until we were stopped in another queue, this time it appeared to be a train track across the road.  We sat there for about 10 minutes before people started to turn round by going over the central reservation so we followed suit.

We arrived at the ferry port exactly 90 minutes before our departure time (we have to do 90 minutes because of the dog).  We checked in and were signalled to go straight onto the ferry – we have never had that before.  We were in our cabin within a few minutes and then suddenly we were leaving – 35 minutes early!  I’m not sure why – I just assume everyone who was booked was on board.

The crossing was very easy and calm.  I stayed in the cabin with Muffin but Richard, old itchy pants, couldn’t sit still!!

We arrived into Portsmouth at about 9pm and, with so few cars on board, we were soon off and by 9.15pm we were on our way home.

Posted by Linda Gifford-Hull at 11:25