We hadn’t quite decided what to do in Chania (pronounced Hania!).  It had been suggested that we get a taxi and go out to Marathi Beach, but it did seem quite a long way (a 25 minute drive) and I had also found a little train but in the end we just stayed in Chania.  We had actually docked in Souda which was still a 15 minute bus ride into Chania.

Once in Chania we really had no idea where we were going but I saw a hop on hop off bus so got one of their leaflets which gave us some idea of where we were!  We headed down to the harbour to find somewhere for coffee – it wasn’t hard to find somewhere as 4 out of 5 buildings were bars or restaurants!  The harbour was built by the Venetians between 1320 and 1356 and it now only serves small craft.

After coffee we went to find the lighthouse – well we could see the lighthouse but decided to walk out to it until we saw that you have to walk right the way round the harbour to get there!  The original Venetian lighthouse was built around the late 16th century to protect the harbour.  During the Turkish occupation the lighthouse fell into disrepair and was eventually rebuilt between 1824 and 1832 in the form of a minaret. The modern lighthouse is often referred to as ' Egyptian' because it was built during a time where Crete was occupied by Egyptian troops who were supporting the weakening Ottoman Empire against the rebellious Cretans.  The base of the lighthouse is still the original Venetian base although the Lion of St. Marc which was carved there has long gone.  The 'Egyptian' lighthouse was leaning badly due to bombings during WWII and earthquakes but it was extensively renovated in 2005 and now looks as good as new. 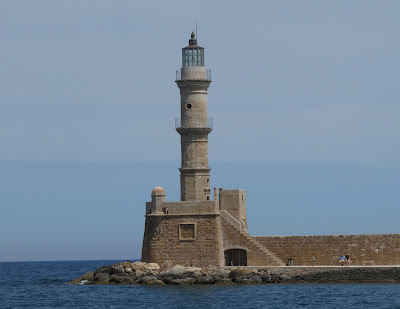 We came across a yacht in the harbour which was flying an Australian flag.  It seems that the owners had sailed from Sydney to the Greek Islands but we forgot to ask which way they had gone! 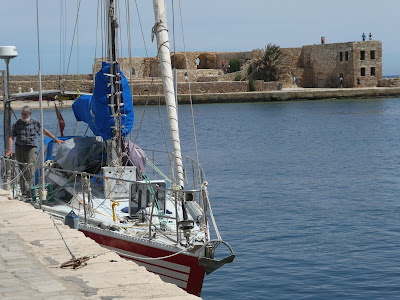 There were horse drawn carriage rides going from the harbour so we decided to take one.  It was a little scary as the horse trotted along the roads which were far from smooth and the carriage wheels didn’t have nice soft tyres!  I wanted to go with the lovely black horse but, as with all taxis, we had to take the one at the front of the queue which was a grey called Athina.  Our driver kept calling out the names of places that we were passing but we a) couldn’t really hear him and b) didn’t understand what he was saying when we could hear!   It was still a lovely way of seeing round a bit of Chania.  We passed a square, which I think was Splantzia Square, where all the locals seemed to be, and they all knew our driver! 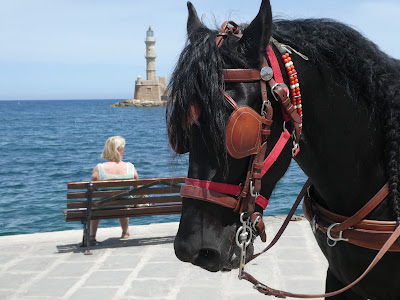 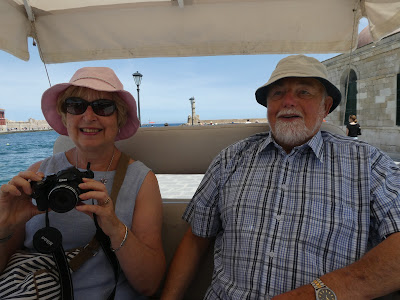 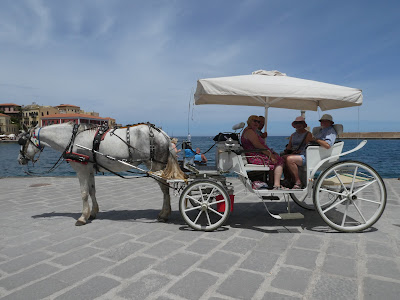 We wondered what this building was, and I have since discovered that it is the Giali Tzami Mosque or Yiali Tzamissi.  It is a fine example of Islamic art of the Renaissance in Chania and was the first mosque built in Crete after the Turkish conquest of the city of Chania in 1649, in honor of the first garrison commander of Chania, Küçük Hasan.  The mosque is a cubic building covered by a large hemispherical cupola supported by four ornate stone-made arches.  It ceased operating in 1923 when the last Muslims left Crete at the exchange of populations between Greece and Turkey. 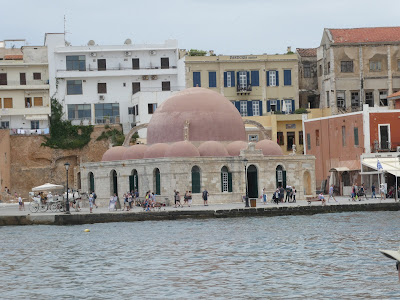 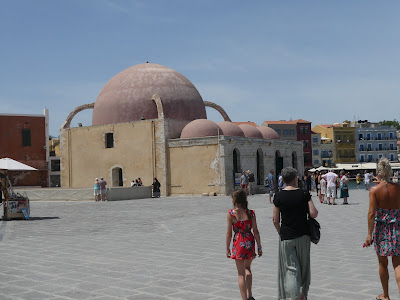 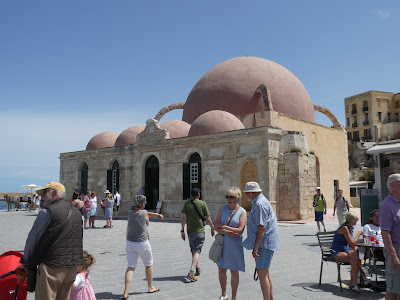 Any one for an electric wooden bike? 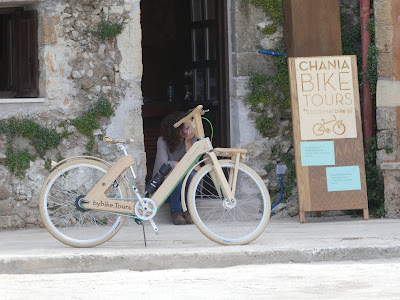 These are a few of the photos I took from, what appeared to be, a large square. 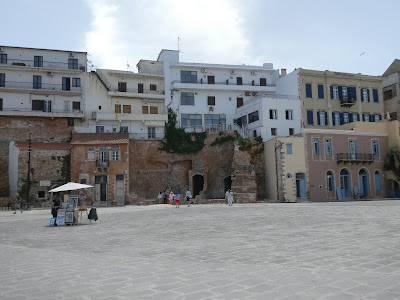 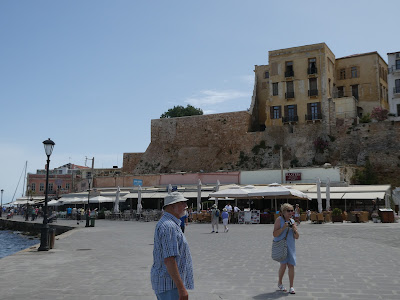 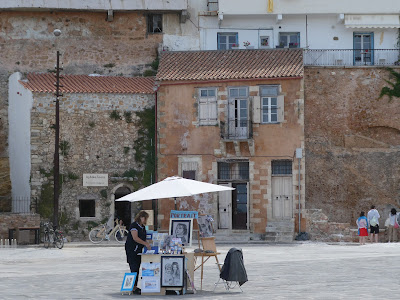 From the harbour we could see a mountain with a white top.  It looked like snow but snow in Crete at the end of May?  I asked in the Tourist Information and, yes, it is snow!  The lady said it is a phenomenon. 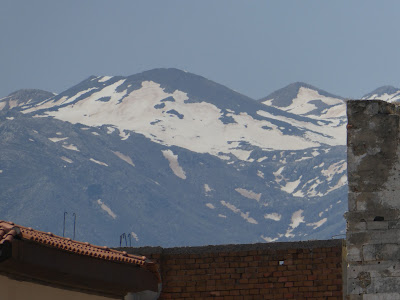 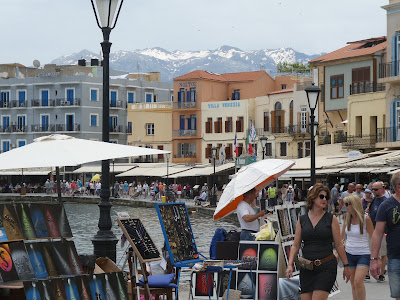 Penny and Jim decided to make their way back to the ship while Richard and I wandered around the other side of the harbour and to find some lunch.  We wanted front row seats and only found one restaurant where there were some.  I was rather disappointed as I looked at the menu but, in the end, chose something called Chaniotiko Mpoureki or Chania Savoury Pie.  It is made from potatoes, courgettes and local cheese.  It looked so bland when it arrived, but I was pleasantly surprised as it was really nice!  I didn’t take a photo but here is one I have “borrowed”. 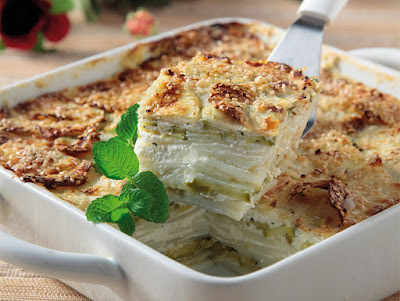 It was then time to head back to the ship as the last bus was leaving at 4.15pm.  We got a bit lost in the back lanes, but we were really glad of it as we found lovely yellow houses, beautiful bougainvillea and lots of, what looked like, lovely restaurants!  We finally came out on the main road and soon found our way back to the bus stop and then back to the ship.

Crete is the largest island in Greece, the fifth largest island in the Mediterranean Sea and the 88th largest island in the world!  Greek sovereign land includes 6,000 islands and islets scattered in the Aegean and Ionian Seas, of which only 227 islands are inhabited.  The population is about 650,000 and the economy is predominantly based on services and tourism. However, agriculture also plays an important role and Crete is one of the few Greek islands that can support itself independently without a tourism industry.

Having spent the last two days watching the D-Day programmes I thought I would add this.  During World War II, the island was the scene of the famous Battle of Crete in May 1941. The initial 11 day battle was bloody and left more than 11,000 soldiers and civilians killed or wounded. As a result of the fierce resistance from Allied forces and Cretan locals, Adolf Hitler forbade further large-scale paratroop operations. During the initial and subsequent occupation, German firing squads routinely executed male civilians in reprisal for the death of German soldiers; civilians were rounded up randomly in local villages for the mass killings, such as at the Massacre of Kondomari and the Viannos massacres. Two German generals were later tried and executed for their roles in the killing of 3,000 of the island's inhabitants.

Here are a few more photos 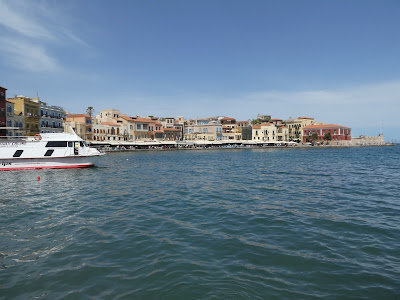 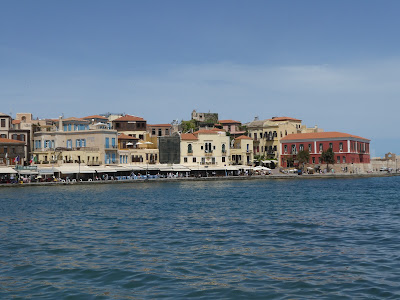 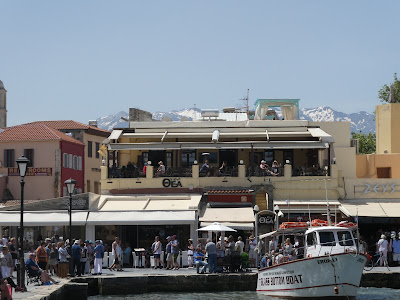 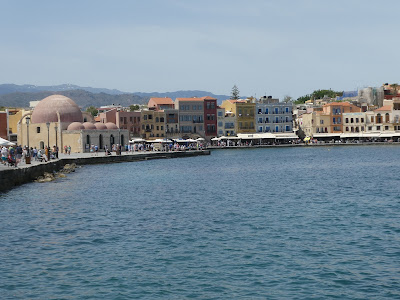 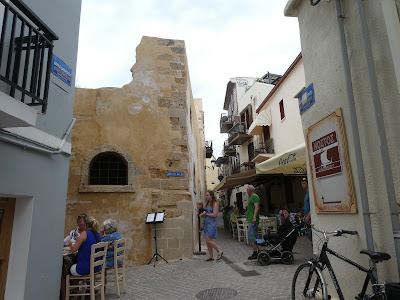 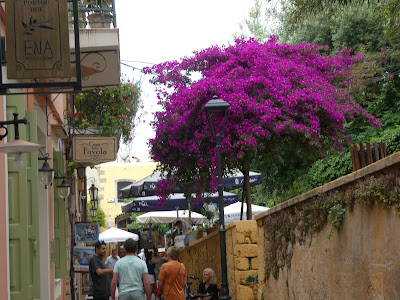 Posted by Linda Gifford-Hull at 18:06