Jim was very tired today, so he decided to stay on the ship and rest.  Fortunately, we were only doing our own thing, so it wasn’t a problem.

As we were at anchor, Penny, Richard and I took the tender into the pretty little town of Mykonos, the island's principal village, which is frequently called the Chora (which translates to "Country" in Greek, but refers to an island's "Town"). 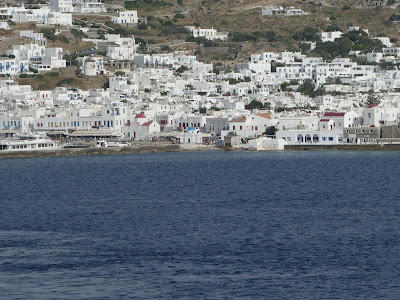 As we arrived on the Island the first thing we saw was a man and young boy carrying lobsters!  Everyone was wanting to photograph them all.  I guess they were still alive, but I couldn’t see them actually moving. 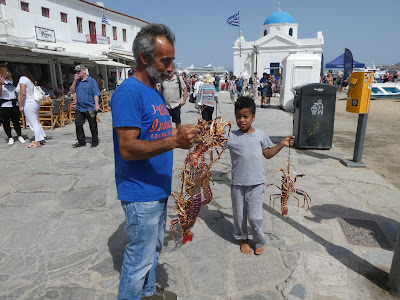 We wanted to explore the little lanes and find the iconic windmills.  These were the first three photos I took. 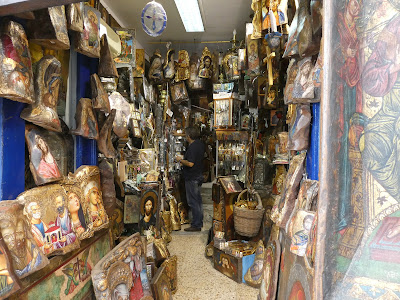 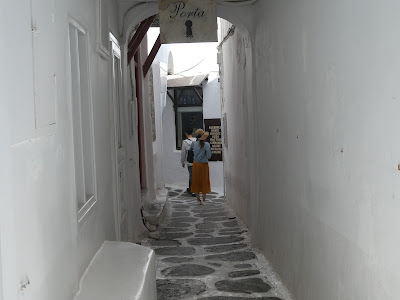 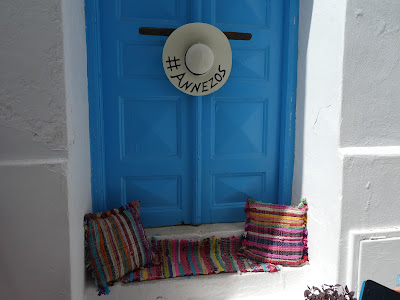 We then moved into the area called Little Venice where there are bars, bistros, cafés, and houses and is so called because it (very mildly) resembles the Italian city of Venice.  Most people recognize the resemblance to Venice in the colourful two-story Venetian-style buildings with wooden balconies.  During the 14th-century, Mykonos lay under the direct rule of the Venetians. This carried on right up until the 18th-century when the island fell into the hands of the Ottoman Empire. Many of the buildings within Little Venice were actually built during the Middle Ages and were once the preserve of wealthy merchants and sea captains.

We wanted coffee and there were masses of coffee stops but we were picky as we wanted waterside and shade – we had to make do with just shade in the end.  These steps were opposite where we sat. 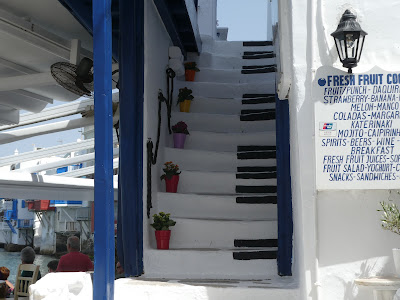 We walked on and when I looked back, I could see Discovery – I love this photo. 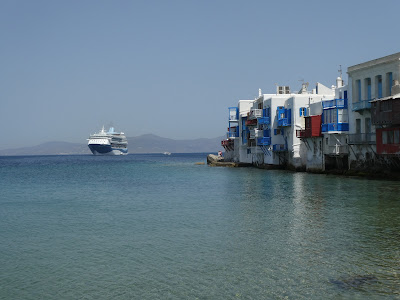 We found the windmills!  The seven windmills that grace the port town are the most famous but Mykonos actually has 16 of them, mostly erected by the Venetians in the 16th century when Mykonos lay on the important trade route between the great city state of Venice and the eastern Mediterranean.  Today they are little more than a tourist attraction but they were once vital to the island's economy. Ships carrying grain would unload their cargo here for the windmills to turn the grain into flour.  The inland windmills of Mykonos at Ano Mera mainly served the needs of Mykonos islanders.  The cone straw roofs on top of the triple storied buildings were rotated to catch the wind and stand alone as housebuilding nearby was banned. Nearby buildings might have disturbed the airflow around the delicate cloth sails that drove the windmill and slowed down the grinding process. 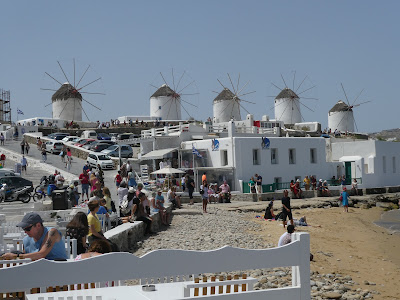 Why do I stand with my toes turned in?? 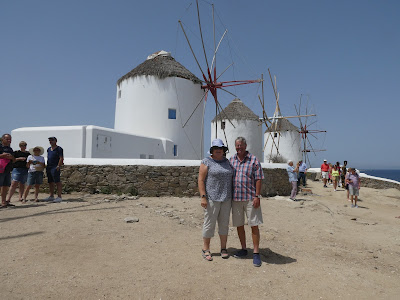 You could pay to have your photo taken with this poor donkey, needless to say I just took a photo of the donkey on its own – well if that woman hadn’t photo bombed it!  We did see if having a drink of water, so it wasn’t all bad. 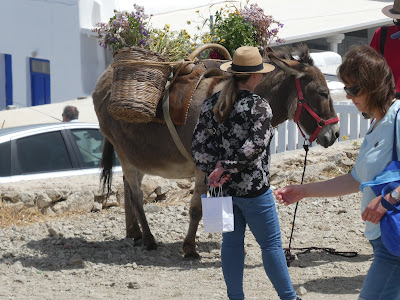 I’ve seen some dirty cars in the past, but this car park seemed to be full of them! 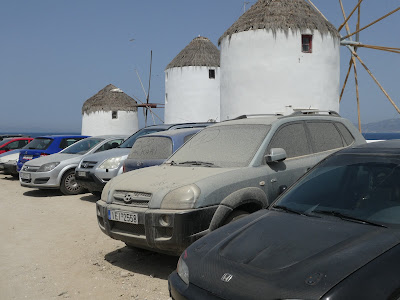 We started walking back towards the harbour and discovered a great many small chapels – this one was quite big in comparison. 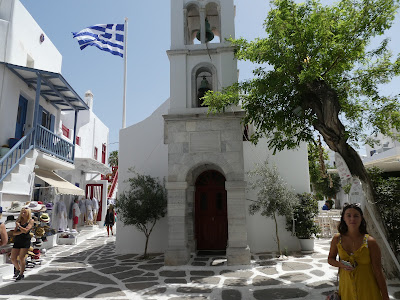 We passed this shop. 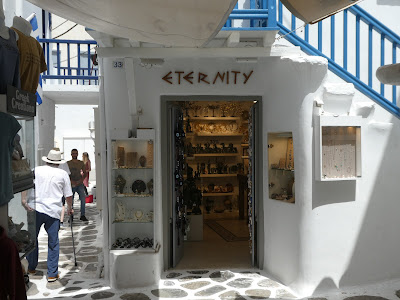 I wanted to find Church of Panagia Paraportiani.  Construction of this church started in 1425 and was not completed until the 17th century. It actually consists of five separate churches which are joined: the four churches (dedicated to Saint Eustathios, Saint Sozon, Saints Anargyroi and Saint Anastasia) are at ground level and constitute the base of the fifth church that has been built above them.  The five churches were not constructed at once, but gradually along centuries. The oldest church is Agios Anargyros, which was built in the late 14th century. The other churches were built in the 16th and the 17th century, while there were renovations till 1920. 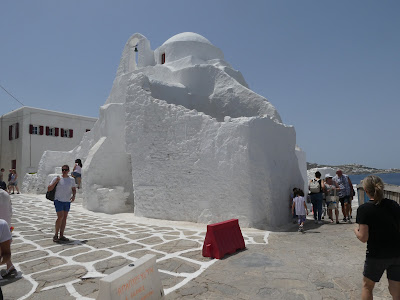 You can see Richard sitting outside the church – we all sat there for a while as it was so cool. 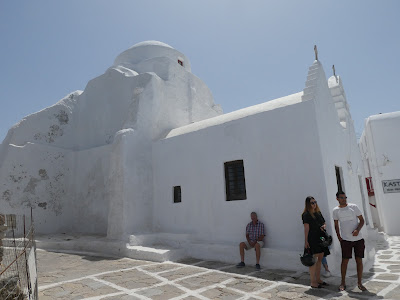 Penny decided to take the tender back to the ship while Richard and I went to look for somewhere for lunch.  I think we made a good choice – Richard actually had a Greek salad!!! 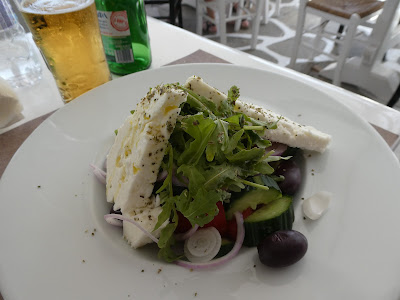 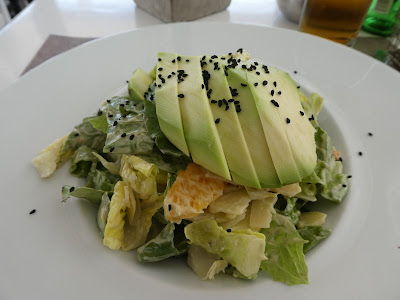 We found this bin – there were others.  Me being me have had to look up Bigbelly and discovered that it senses and communicates fullness and even has on-board GPS for geolocation!  I guess that’s what it uses its solar power for. 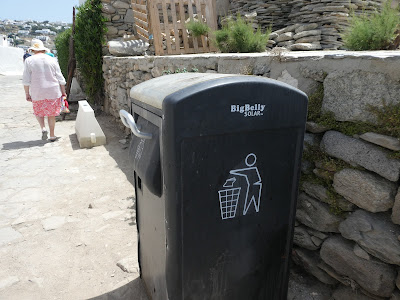 We had a meander along the harbour looking in the shops then made our way back to the ship.

These photos were taken as we sailed away. 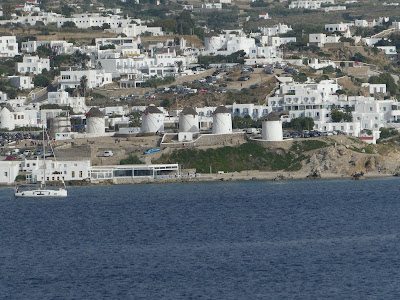 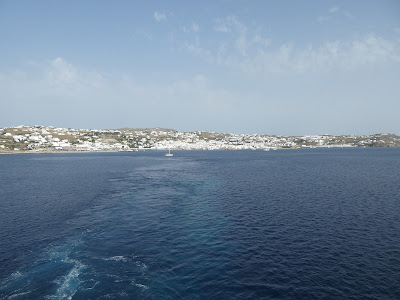 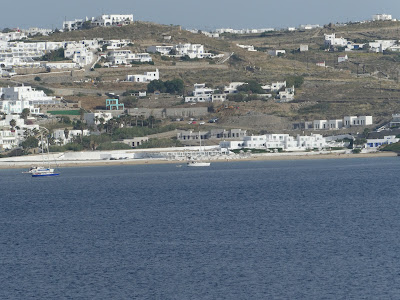 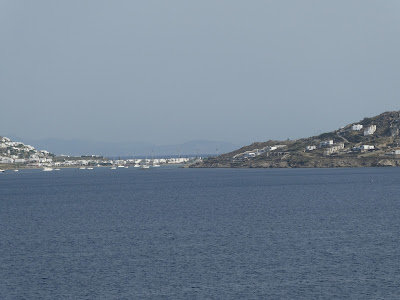 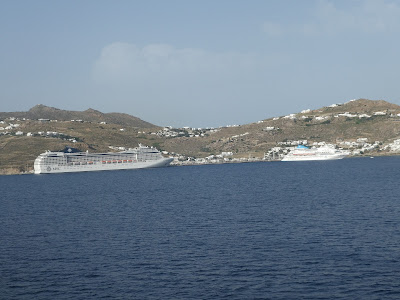 Posted by Linda Gifford-Hull at 13:40