I had an amazing night’s sleep – I haven’t slept that well for months.

I was up early – for me anyway which was just as well as Victoria and James arrived about 9.30am and I wasn’t expecting them until 10am!  They unloaded their car and went to leave it at a local car park.  East Street moorings are very close to the station and the idea is to go down river and then V & J will jump ship and get a train back to Oxford.

Down through Osney Lock and under Folly Bridge where we encountered a lot of punts and rowing boats.  I don’t think I have ever seen so many out at one time. 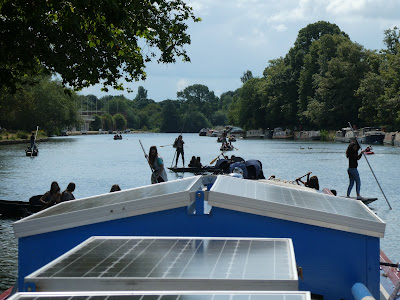 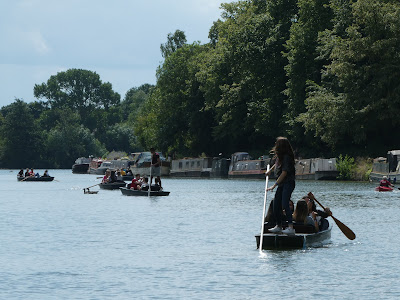 Strangely enough as we went under Folly Bridge, James recognised it and he had been filming at the Salters wharf on Wednesday!

Down through Iffley and Sandford Locks.  Sandford is the deepest lock on the non-tidal Thames at 8ft 9ins.
We pulled over before Abingdon Lock to dump the dumpables and fill up with water then went down the lock.  I love this sign. 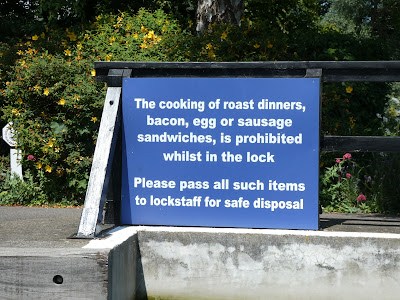 We would normally try and moor near to Abingdon Bridge but decided to stop just beyond the lock which was a good move as when Richard went to see if there was any room further on, he found it was full.

We had a quiet afternoon with both the working people taking a long nap – I could easily have had one but didn’t!

In the evening we walked up to The Nag’s Head on Abingdon Bridge where we had a very good meal.  We sat outside where it was breezy but certainly not cold.
We walked back to the boat and got the chairs out and sat on the bank until about 10pm.  It really was a lovely evening.