We are back!  Richard has already been out twice with a friend and then his son while I waited expectantly for my new grandson to be born – but more of that in a bit.  But this is our first trip together this year.

If anyone is looking for a dark blue Mary H this year then you won’t see her!  During the winter she went up to Dave Bixter at Hilmorton Locks and had a paint job.  She looks beautiful though there was a slight scare as they started using the wrong paint and called us up to clarify – thank goodness we did go as it wasn’t a nice colour at all!  We are really pleased and Richard says that he had lots of nice comments when they were out last month. 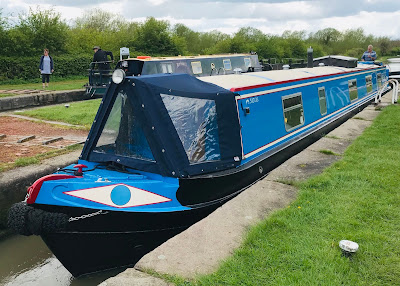 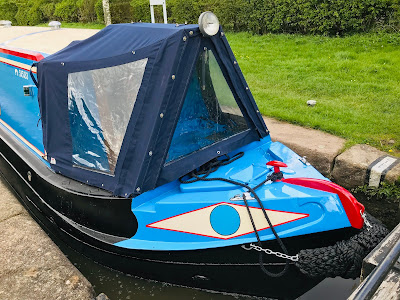 We do, however, need to paint the middle of the eyes as I think they look really evil! 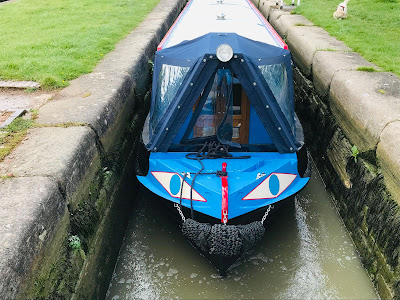 I guess this isn’t actually the first trip for both of us this year as we took Mary H from Hilmorton to Dunchurch Pools back in April – but that doesn’t count.  Does it??!!

So back to my lovely new grandson.  Bobby Finan Renwick entered the world at 5.30am on Monday June 10th weighing in at 7lbs 15oz.  I was staying with Robert and Laura for a couple of nights and got woken up at 2am on the Monday morning to say that they were off to the hospital.  Needless to say, I didn’t sleep for the rest of the night until I got a photo at 6am!  Laura was home at 2.30pm!  Bobby is doing really well both feeding and sleeping. Tobyn wasn’t too sure about at first about being a big brother but has got over it and seems to love him now.  I will be going home a couple of times during the summer to get a Granny fix.  Sorry to bore you with all the photos – I couldn’t make my mind up which ones to use! 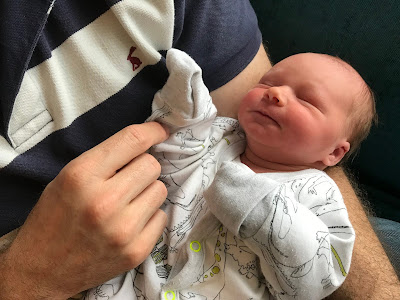 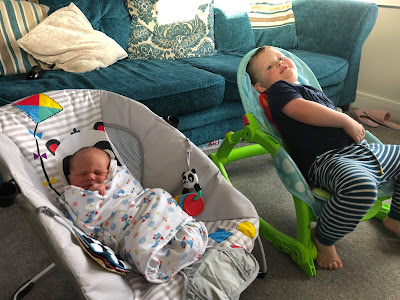 Anyway, let me get back to this blog post being about Mary H and her summer cruise!  We drove up today and had a good journey.  Then it was the bit I hate – unpacking.  I should be used to it by now, but I still hate it.  Everything has its place, but I think it’s just the pure amount of stuff we bring for the summer and a British summer too!  It was then a trip to Sainsburys to vittle up – no more shopping until Banbury.

Once the shopping was put away, we decided to leave the marina and spend the night on the canal where it was much cooler.  We only went a mile or so, but it was enough to find a nice spot.