A lovely bright and sunny morning – these mornings are when I know why we have a narrowboat!  Sometimes, in the rain, I do wonder!

We were soon down through Braunston and it didn’t seem to take long before we were at Napton Junction.  For the last two years we have done a right here but this year it was straight on and onto the South Oxford – one of my favourite canals.

No blog is complete with a photo of Napton windmill. It was built about 1835 but around 1900 it ceased to be worked with sails and was converted to steam, which powered it until about 1909.  It was designated a Grade II listed building on 7th January 1952.  The mill lay derelict until about 1972 when it was restored, converted into a house and fitted with four patent sails. In January 1976 two of the sails blew off in a gale and were later restored. 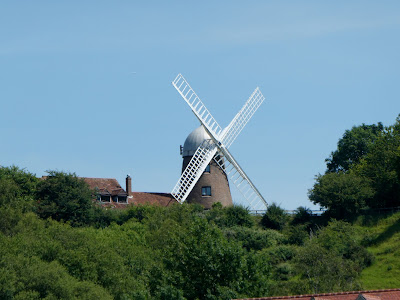 We pulled over for lunch before attempting the 9 Napton/Marston Doles locks.  However, a boat reversed back passed us said that the lockies, due to low water, were only letting one boat through a lock when another boat was coming down.  I suggested that we stay there the night and set off in the morning but old “Itchy Feet” decided that we would go for it and he was right!!!!!!!!!!!!!  The bottom lock was with us as were all the others until the Napton Top Lock but here there was a lockie who turned it for us.  He said that they had been letting water down and the top lock was now fine to turn.  I’m not sure what happened about the lower ones though.  That lockie was the only one we saw so no-one would know about the “not turning” the lock rule – it wasn’t on the C&RT stoppages list.  This photo is a by-wash lower down the flight and the next one is above Napton Top Lock. 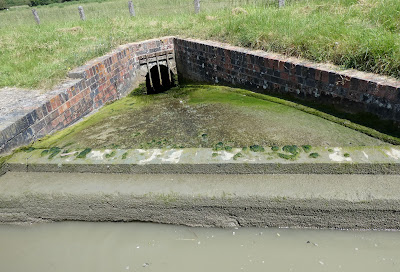 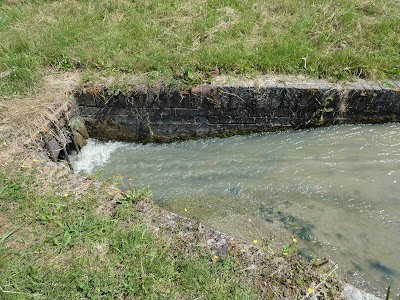 When we reached Marston Doles bottom lock we had to wait while a Jules Fuels boat and butty came through but then it was straight through.  There was a boat coming out of the top lock, but I misjudged the speed he was leaving it at and got in a bit of a muddle when there was a nasty metallic bang which then left an even nastier clink!  I shut the engine off, and Richard pulled the boat over and headed down the weedhatch.  Thank goodness all he found was a fender which sadly floated away as he dislodged it so it can jam another boat’s prop!

At the top of the locks was another Jules Fuels boat (I didn’t know there was more than one) – I wonder where they are heading.

Normally we would try to moor at Ladder Bridge as it is nice and open and sometimes you can get a good view however, with it being open it also means that there is no shade.  We kept trying to pull over in nice shady places, but the summit pound is low.  We only draw 18 inches, but it still took us a long time to find the right place.

It was lovely to get the chairs out on the towpath and have a welcoming cup of tea.

We passed the “narrowboat in a field” – I think they could do with cutting the grass a bit! 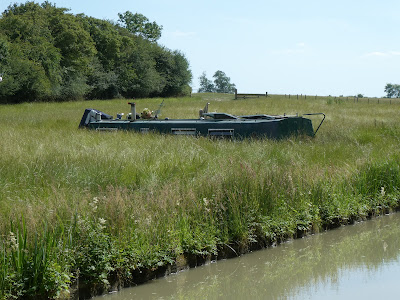