We moved down less than half a mile and moored outside the Thames Court pub.  Once again there was masses of room at that time.

We were moored right opposite the new Huf Haus which is on the Weybridge side of the river.  There used to be a lovely conventional house on the site which, when it was sold, was pulled down and the glass fronted monstrosity was built.  I guess I am being a bit harsh here as it does seem to have settled in to it’s surroundings since we were last here.  The lovely willow trees, which must have cost a fortune, have shielded a lot of it.
Two of Richard’s three step daughters, their husbands and 4 children (2 each) were meeting us at the pub for lunch.  We didn’t go for the roasts as we were all eating in the evening so had sharing platters or starters.  The food was OK but not brilliant.  After lunch all the boys (including the Dads) wanted to fish so they set up just behind Mary H.  Nothing was caught – I’m afraid but there much excitement.  The three younger boys loved the boat but I was worried as it really isn’t child proof, but the Mums were on watch! 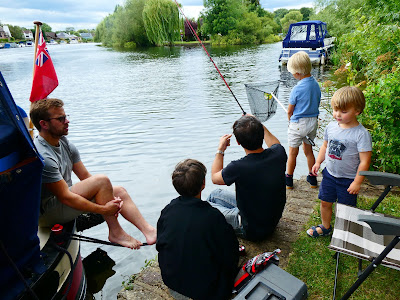 After they went, we got changed and waited to be collected by Andy and taken back to their house where wife Chris had made a lovely roast dinner.  I’ve known Chris and Andy since before Victoria was born as our two youngest daughters are the same age – 35.  They also moved almost opposite me in Shepperton which was great.  We had another lovely evening with them.