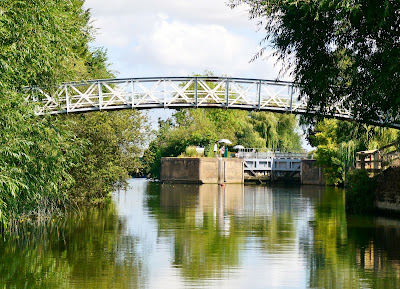 Up to Day’s Lock but stopping just before to empty the toilet cassettes.  Under, what I always call, Pooh Sticks Bridge but it is no longer that.  The annual World Pooh Sticks Championships took place there from 1984 until its move in 2015.   The organisers cited increasing logistical difficulties as the event had become more popular and the use of the land had changed.  They were moved to Langel Common in Witney, and have since attracted over 1,500 visitors, including many from overseas, including the US, Japan, Kenya and Australia. The championships features an individual event and a four-person team event.

Out of Day’s Lock and we saw a small herd of cows with very long horns.  I only just grabbed my camera in time but still only got half a cow!!  I tried to look it up on Google but all I could find was a Texas Long Horn – maybe? 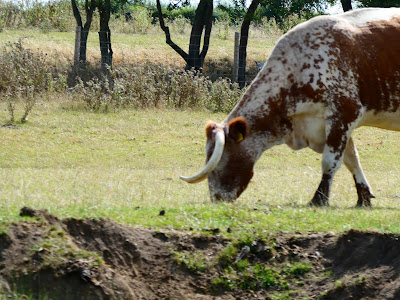 At Clifton Lock I overheard the Lock Keeper saying that he had had 50 boats through the lock yesterday with Monday to Thursday being the quietest days.

Culham Lock is one of the deepest on the Thames at 7ft 11ins, it also has great big sluice paddles which let the water in rather rapidly.  The Lock Keeper said that he gets canoes and kayaks in there just to use the white water!

Just before Abingdon a new junction for the Wilts & Berks Canal has been constructed almost opposite the top end of Culham Cut as part of a restoration project. The junction was opened on 30th August 2006, and initially runs for about 150 yards to a winding hole but will eventually link to the historic route of the canal to the west of Abingdon. 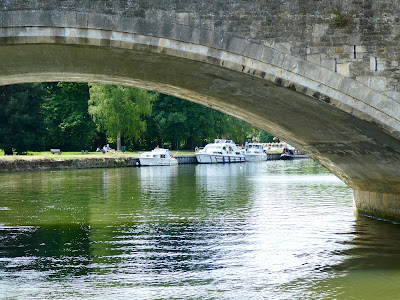 We had no idea what the mooring in Abingdon would be like as we approached.  There was a space before the bridge, but we like to be the other side.  As we crept along willing a boater to leave – one did!!  So, we took his place and moored up – how lucky were we!  However, when Richard took Muffin for a walk later, he said there were no boats moored under the lock where we had moored on our way down stream.

I’m afraid I was deep in genealogy all afternoon.  I have three great grandfathers all called Matthew Peacock.  That in itself causes confusion but also, they are sometimes known in other trees as Mathew (one T) – more confusion.  I think I finally got them sorted and felt quite elated!  The first Matthew was born in 1797 and he was my Great, Great, Great, Great Grandfather!!

Posted by Linda Gifford-Hull at 10:56