We ended up staying two nights at Abingdon because of the weather.  The rain, when it came, was heavy but really only in short showers, it was the wind that was the main problem.  It would gust and push us off the bank then gust again and push us on!  I get seasick on a sailing boat on the sea, and I was a little concerned that the rocking of the boat might bring it on, but I was fine.

This goose family came to visit us.  As far as I could make out the white goose is Dad and the Canada Goose is Mum.  The others are slightly smaller, so I assume are the babies.  I have often wondered about these crossbreeds, but I have discovered that hybridization among goose species is fairly common in the wild.  Geese mate for life but I wonder if it’s the same for hybrids? 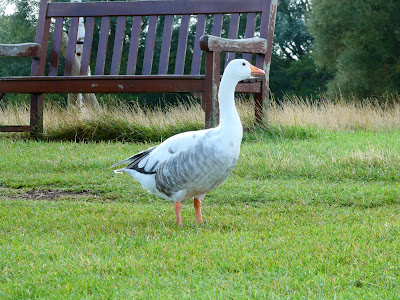 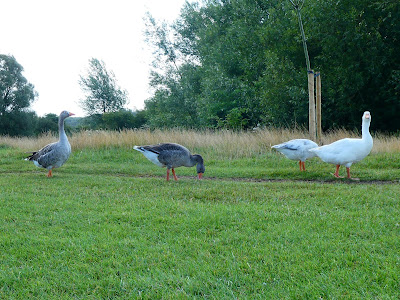 This narrowboat is opposite us.  Quite why it is covered in camouflage netting we couldn’t work out.  It is very long – probably the longest narrowboat I have ever seen.  The owner has a generator, fairly quiet I will add, but it got very annoying – especially at midnight! 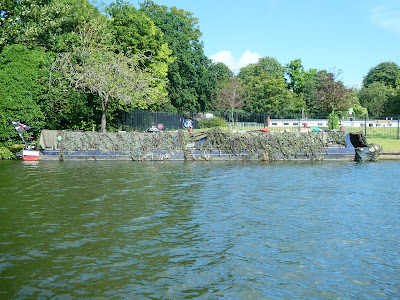 On Saturday afternoon we walked up to the lock, across the weir and into Abingdon.  It is a lovely walk and Muffin really enjoyed it – he had been going a bit stir crazy!  A quick visit to Waitrose then back to Mary H via the town.  A very nice circular walk. 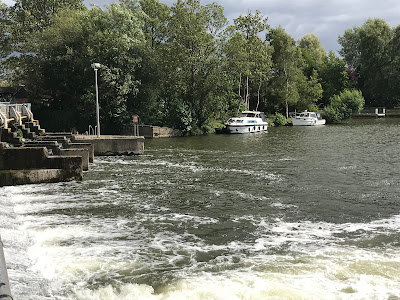 On the town side of Abingdon Bridge is the old gaol.  In the late eighteenth century criminals could no longer be transported to America, and existing gaols were understood to be inhumane and unsatisfactory.  Architects’ drawings were approved in 1804 and it had been hoped that the prison would be ready by mid 1809. The first inmates arrived in 1811 when the prison was still incomplete.  It was fully operational by.  The radial design of the gaol was modern for its time, allowing the segregation of different classes of prisoners. But as time passed, opinion moved towards what became known as the separate system, where prisoners were kept rigorously apart from each other and had no human contact except with the prison chaplain and staff.  By the 1860s, the government’s prison inspectorate was reporting that the Abingdon gaol was unfit for purpose. Cells now needed heating and artificial ventilation, which could not be retrofitted.  The gaol was finally closed in 1868. For many years it functioned as a grain store. Some of its subsidiary buildings had become slum dwellings and were demolished in the 1930s. During the 1970s it was partially rebuilt as a leisure centre.

Abingdon Gaol today is a series of flats and serviced apartments with cafes and restaurants.  The apartments, according the website, exude style and comfort. 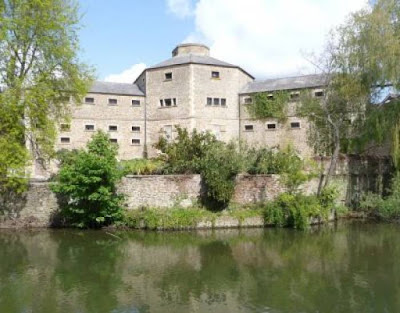