A short day today as Aynho was our destination.  Yesterday I was having a messaging conversation with a friend, Dee, who was going up to the Lake District with her husband, Geoff, and labradoodle, Tess, and wondered how far away from her journey northwards we would be.  Aynho was the best place but it proved very difficult to find somewhere for them to stay that was a) dog friendly b) not horrifyingly expensive and c) wasn’t booked up!  The messaging went quiet then she came back and said that she had hired a motorhome for the weekend and that the Lake District would have to wait!  She had never driven a vehicle as big as a motorhome before but has towed a caravan.  This morning she said that she has booked a site which is about half a mile from Aynho. 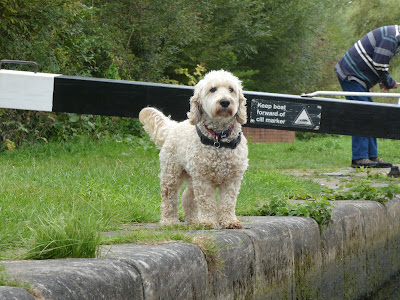 As I said in the last paragraph, Dee has a Labradoodle.  Tess just adores Muffin!  The feeling isn’t really mutual as Muffin isn’t that struck on large dogs having been attacked by one once.  The two dogs will go mad when they first see each other but then Muffin gets fed up, but Tess doesn’t! 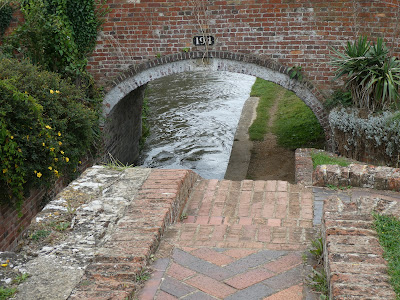 There was one boat in front of us at Somerton Deep Lock, but it does fill and empty quite quickly for a 12 foot deep lock.  There was a boat waiting to come down, but no help was forthcoming – the chap just stood there holding the boat and the wife just stood on the boat.  I was so tempted to thank them for their help as we went passed them but controlled myself!!
When we arrived at Aynho the ring moorings were all taken so we went up beyond the marina and moored up.

We waited to hear from Dee.  I was worried for her, but I needn’t have been.  She rang from the Great Western Arms having driven passed the entrance for their caravan site.  We walked up to the pub where both dogs were overjoyed at seeing each other – it was nice for us to see Dee and Geoff too!  I can’t believe that I didn’t take any photos of the two dogs ☹

My wooden duck had had an accident so Richard decided to mend it.  Poor thing - rather undignified! 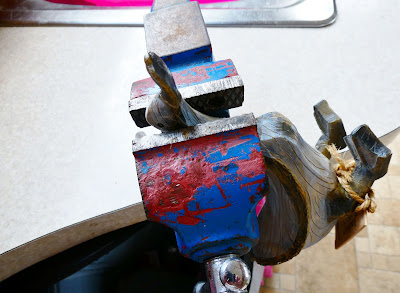 It was only 5pm but that didn’t matter.  We sat in the bar and had a drink before ordering a meal at 6pm.  The food was very good, and the service was excellent.  We have always sat outside before - this was our first time inside and we were looked after really well.  We had fed Muffin before leaving the boat, but Tess was hungry, so Dee asked if they had any sausages and if so, could they please cook a couple for Tess!  These were duly cooked and came out all cut up – Tess had most of it, but Muffin was overjoyed at a surprise sausage!  They weren’t put on the bill 😊

Dee had managed the motorhome very well but they both complained about the rattling – mainly of things in the cupboards.  I remember my sister saying this – each time they went to drive away things had to be wedged and paper put between plates etc.  It is much easier in the caravan as we don’t hear what goes on!

I got a message from Dee later on to say that they had had to drive under an archway to get onto the caravan site and had got stuck breaking the two skylights!  It seems crazy to me that to get onto the site you have to drive under an archway.  Dee said that it looked, by the state of the archway, that they weren’t the first people to have done it ☹

Posted by Linda Gifford-Hull at 11:14