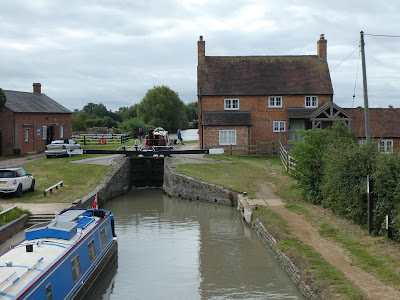 Napton Junction came and went, and we were soon at our destination for today – Bridge 100 where they used to be a lovely view but, once again, the hedge is now too high.

Just before we stopped we could see a dog swimming in the water ahead of us, it was in the centre of the canal with its owner on the bank and a boat trying to gradually push it towards the bank, this worked and the spaniel was unceremoniously pulled out of the water and put on a lead - it didn't seem any the worse for it's experience. As the boat passed us, we realised that it was Wine Down which is moored on the same bank of pontoons as Mary H at Dunchurch Pools.  Richard met John and Elaine, earlier in the summer and discovered that not only do they moor their boat near to ours, but their “home mooring” is on Hayling Island where we are also moored!! 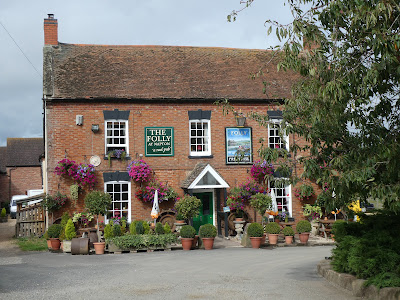 I’m always trying to research something!  Sometimes nothing comes of it and other times the result, for me anyway, is fascinating.  Today, as in the past, I have been trying to find out what the stretch of canal between Braunston and Napton is really called.  The numbers on the bridges follow the Oxford numbering but if you look at a Grand Union map, they show their own numbering sequence.  Today I have found that the bed of the canal here was actually owned by the Oxford Canal Company, and once upon a time they retaliated against the Grand Junction Canal people (as they were known then) by charging them excessive tolls to move the Grand Junction narrowboats across their section of the canal at this point.  So, I have deduced that today this part of the canal is known as the Grand Union but, in fact, it should be called the Oxford Canal.  However, the North Oxford finishes at Braunston and the South Oxford starts at Napton so what is the bit in the middle called!!!  I was just discussing this with Richard, and he said that as this seems to be a wide canal it must be the Grand Union!

Posted by Linda Gifford-Hull at 10:57