We were up at 7.30am as we wanted to get up and going.  Breakfast was at 8am and then we were able to see the lake, which had turned yellow with all the sand. There is a lovely terrace which, on a lovely sunny day, would be lovely with a perfect view of the lake.

We finished packing loaded up the car and said our farewells.  Mama said “have a nice trip” which I was very impressed with.  I bet she had been practicing that!

We left at 8.45am and headed down towards the coast in sort of sunshine.  East of Valencia the sky went very black and we drove through a thunderstorm (fortunately Muffin couldn’t hear the thunder unlike yesterday when he was so uneasy) He didn’t eat his lunchtime snack! 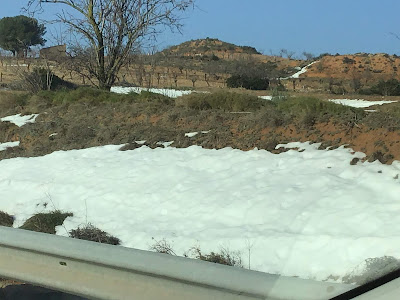 In places it was quite foggy with snow still around. Then suddenly we were back into the sunshine and we watched the thermometer going up.  We stopped for fuel and a coffee, it was lovely to feel the sun on us.  About 50 miles from our destination it went grey and the rain poured down, but we could see blue sky and sunshine over Mojacar.  As we came off the main road there was snow in Los Gallardos – just 8 miles from Mojacar Playa.

We always feel that we are “coming home” when we see Mojacar Pueblo clinging for dear life to the mountain side. 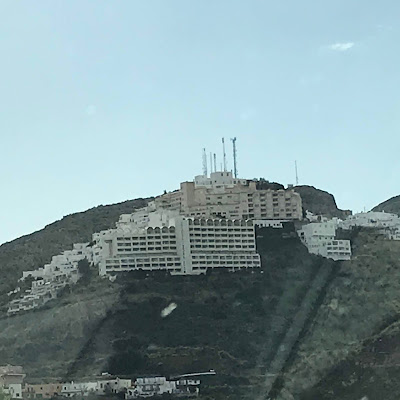 We drove along the Playa pointing out places that had changed from last year – there weren’t very many, and then up the treacherous road to Casa Cristonia where we met Stuart, the property manager. 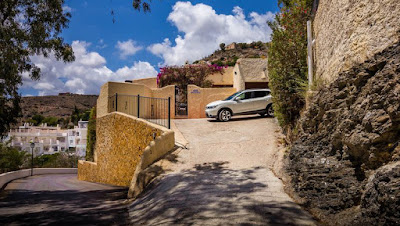 We were soon left on our own to unpack which didn’t really seem to take too long.  Richard took Muffin down to the beach and by the time he came back I was done!

We had arranged to meet Sue and Andy at the Chinese at 7pm and we also joined by Russell, a friend of Sue and Andy’s whose wife had had to go back to the UK.  We had a good meal and a lovely catch-up.

Today was shopping day.  We went to the Mercadona supermarket, then on to Iceland in Vera.  For new blog readers (and for others who have forgotten) this is an outlet of Iceland Overseas which also sells Waitrose products.  99% of the staff are British by birth but who now live out here.  Back for a late lunch, a rest and then out again to the Chinese Euromarket (a hardware type shop which sells just about everything) and to take Muffin for a walk on the beach.  We took the ball thrower and he had a wonderful time.  He seemed to have a set routine of chasing the ball, picking it up then going into the sea – goodness knows why but he did it every time. 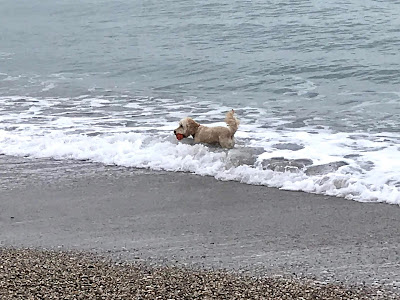 Friday is market day in Turre so off we toddled.  It was quite busy, and we rather struggled to find a parking spot.  We did our usual walk to the far end then turned round and walked back!  We got a cooked chicken for dinner – these have gone up from €6.50 to €8.00 since last year but as one will do the two of us for two meals, I guess its still good value.  Richard wanted a pair of shoes as his trainers had come adrift.  Quite why they had to do this after we left home, I don’t know!  He found some at €18, they won’t last that long but at least he won’t have to go barefoot now!  I stopped at the fruit and veg stall that I like but realised that I had bought everything I needed yesterday – how silly was that??

Another of my favourite shops was next, one I only found last year.  Super Turre is a supermarket that sells just about everything.  They cater for the Brits which is very helpful.  However, I only wanted salt and booze!  A litre of Gordons gin was €10.11 (£8.50)!!  A crazy price.  They also sell a New Zealand sauvignon blanc called Dusky Sounds for about €7.00 (£5.90) which is cheaper than most New Zealands in the UK.

Back home for lunch and a quiet afternoon before taking Muffin to the beach.

I took this photo off rather threatening clouds to the south of us but thank goodness they didn’t come our way. 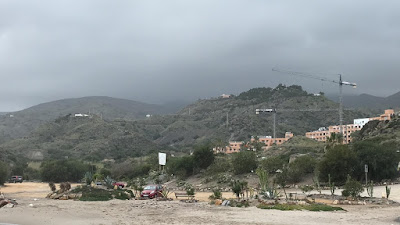