A late start, but does it matter??!!  As we drove down towards the Parque Commercial, we saw Sue and Andy disposing of their rubbish (we have to take all our rubbish to large grey bins dotted around the place) and we made a plan to meet at Masko for lunch.

I paid a quick visit to the Consum supermarket which is underneath the Parque Commercial then returned to Richard who was sitting have a coffee with Muffin – well Richard was drinking coffee not Muffin!  Sue and Andy turned up after their shopping expedition and a very nice lunch time was had 😊

We took Muffin down to the beach for more ball throwing.  Ever since we bought a ball thrower he has barked and barked, with excitement, as we go to throw the ball.  This year I am determined to stop this, and we have made a concerted effort to tell him off when he barks which appears to be working.  However, I must remember to take treats out with us to reinforce that he is a good boy.

I have realised that I haven’t given you a photo of our view, so here it is 😊 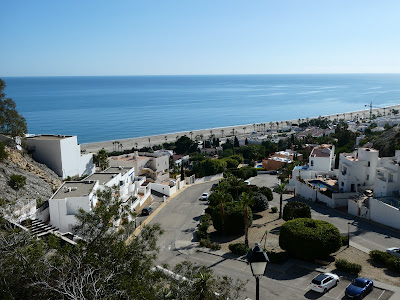 We were having friends from the UK for lunch today.  They are here on a golfing holiday and we haven’t seen them for a few years, in fact since we left Ropley in 2014.  Its crazy that we all had to travel 1250 miles to see each other when they only live 28 miles from us!  They thought they were lost as Google Maps seemed to throw a bit of a hissy fit but in fact it brought them right to our door.  We had a lovely lunch and a great catch up but all too soon it was time for them to go.

I’m afraid that after they left, we just sat in the sun and either dozed or read.  Poor Muffin didn’t get a proper walk today ☹

We had a visitor last night, it didn’t stay for long once it saw Muffin!  It looks so like Victoria’s cat Yoyo that we wondered if it had stowed away with us? 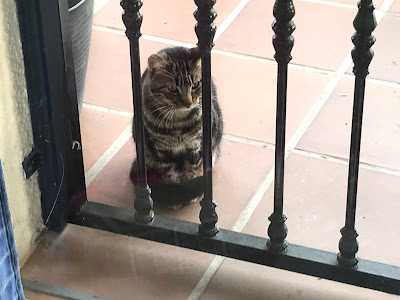 We seem to be waking up later and later – this morning is was 8.15am.  Our bed is really comfortable, and the curtains are black out and hardly let any light in at all.

This was to be our first quiet day.  I did a couple of loads of washing and made use of the washing line, however it goes over the swimming pool and I was a little concerned as I pegged the washing out!  I did drop a couple of pegs into the pool and had to fish them out! 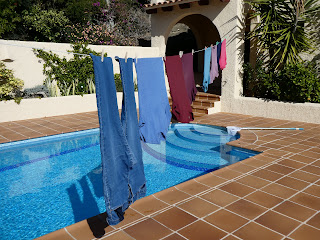 In the afternoon we made a brief trip to Mercadona, cup of tea and cake at Moka, Euromarket and then to the beach with Muffin.  I remembered the treats today and we really seem to be getting somewhere.  Muffin is naughtier if Richard is throwing the ball as he isn’t as strict with Muffin as I am! 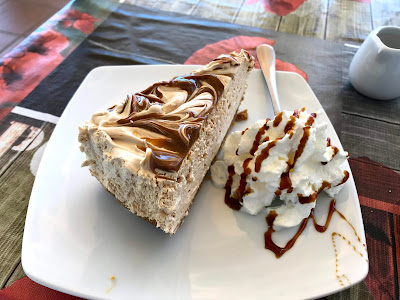 Before coming home, we popped into Claravista 1, the villa we stayed in last year.  Last year’s next door neighbours are in number 1 this year doing some much needed decorating.  They did number 2 last year.  Anyway, I had left my travel and 12v kettles behind last year and Carol had them for me.  It was nice to see them but sad to hear that their old dog Moffy, passed away in April last year.

Posted by Linda Gifford-Hull at 10:47