Oh dear, where do I start.  I haven't blogged since February 8th which was the day we were broken into while we were out for dinner.  I haven't felt like blogging since then, but it is now three weeks later and I am beginning to feel more myself again.  We have done quite a lot in those three weeks and I will try and catch up a bit over the next week or so as my blog is also my diary.


What I did do though was write down what actually happened at the time it happened.  I needed to do that so that I could remember minor points when talking to insurance companies!  You might find some of this boring but, as I said, it is my diary too.

I've put some photos at the end to show what we came home to.

On Saturday night we went out for dinner with, Sue and Andy, some boating friends who are over here.  When we got home, Richard went dashing to the loo and as I followed him in I noticed that the blind was up over the kitchen window and I remembered that I had definitely shut it before we went out.  Then I noticed that there wasn’t a window in the hole!  I looked at the dining table where both our laptops had been, and only Richard’s was there.  I shouted to Richard that we had been burgled but due to the fact that we had been talking about burglary over dinner he didn’t believe me at first but after the second time of me telling him he realised that I meant it.  When I looked in the bedroom everything was all over the place with the drawers open and our suitcase, which had been under the bed, open.  I looked in the cupboard and the safe was gone.  They had been through every cupboard and drawer, except for the kitchen.  On further investigation we found that not only was my brand new laptop, one month old, gone, but also my iPad, engagement ring, a silver necklace and chain and a bracelet which I had bought with money left to me by my mother.  In the safe had been some money, passports (including Muffin’s) and bank cards.

We subscribe to a card blocking and replacement service, Sentinel Gold, so I rang them up and cancelled all the cards that we hadn’t got on us at the time which was a big relief.

I rang Dorothy, the villa owner, and she suggested that I phone the property managers, Stuart and Natasha.  To their credit they were with us within 20 minutes – this was about 10.30pm.  They were so good (he is an ex copper) and they looked around outside and he found where they had got in which was over a high wall.  They also checked the wardrobes and under the beds to make sure no one was hiding.

After Stuart and Natasha had gone, Richard and I sat rather stunned with a cup of tea!  We went to bed and I tried reading, sleeping and then reading again. Eventually I got up and lay on the sofa and I must have finally dropped off with a talking book going.  When Richard woke me, the story had been going for 2 hours so that’s how much sleep I got.

Today we had to go to the Police Station with Stuart and an interpreter to report the break-in.  It seemed to take for ever as apparently their computer system was being slow.

We then met up with Sue and Andy – Sue gives the best hugs!!  I had 3 large G & Ts then slept for a couple of hours which I desperately needed.

We actually had a visit from a plain clothes detective who had a look round and dusted for finger prints but of course there weren’t any.

Today’s job was to make an insurance claim.  Our house contents insurance is through Hastings Direct (don’t ever use them).

Getting through to Hastings Direct was not easy as, of course, they were very busy with people claiming for storm damage. They are only a middleman and told me that we are insured with Lloyds Banking Group.  Twice they put me through to someone at, so called Lloyds, who said that our policy number is not one of theirs.  I tried phoning Lloyds Banking Group direct, but I got the same thing that our number is not one of theirs.  Eventually I found someone in Hastings Direct who said that they would escalate the problem to a more senior person who would then phone me back.  Guess what, they never did!!

About 4pm I thought I would try Hastings again and finally found someone who was able to ring Direct Group (not Lloyds Banking Group at all) and I made my claim but of course there is a limit to the amount you can claim away from home.  For us it’s £1000.  Fortunately, my new laptop was on as a named item, but the other items come to well over the £1000 limit.

Our passports, my driving licence and the cash we lost are covered by Sentinel Gold which is a great help given the limit on our house contents policy, but we will still be out of pocket.

This afternoon we discovered that the bloody stupid woman at the card service we called on Saturday night had cancelled the cards we had in our possession and not the ones that were stolen so we have no active cards with us.  They are arranging for some emergency cash to be sent to the local Western Union so we will be OK.  The new cards should be delivered to home by Monday or Tuesday next week at the latest which Victoria will send to Sophie who is coming out on the 20th.

As a write this Richard has just had a phone call from a Mastercard call centre about our FairFX currency cards.  By some strange hand of fate, we have been able to unblock them, so we don’t need the emergency cash but it’s too late as its waiting for us to collect!  Of course, we don’t have a safe to leave it in – not that a safe is safe!!

We are going out for dinner now.  You couldn’t make all this up, could you???

We had to sort our passports out today, collect the emergency cash and pay Richard’s speeding fine which he got on our drive down here.  He needs to pay it within 21 days otherwise it goes up from €150 to €300!

First stop was the Western Union office in Mojacar, but they couldn’t give us the money without our passports – duh!!  We tried a different office, but it was the same.  So, while Richard went to pay his speeding fine at the bank, I rang Sentinel Gold and told them to cancel the money.  Richard came back to the car and, guess what, he needed his passport to make the payment!  We had already tried to pay the fine on their website, but it wouldn’t let us. We can’t pay them direct from our bank account as we need to set up a new payee and would need a debit card to use in the pinsentry machine. We now have to go to Almeria to pay it. We went over to Vera to sort out our replacement passports and it all went smoothly.  There is an English Post Office there and the lady who runs it, Sue Ennis, is so nice and helpful.  She gave us the forms and helped us fill them in and told us what we needed.  €330 later we went into Garrucha to get our photos done – these were emailed to Sue.  Later I got a message from Sue to say that everything was complete and would leave Vera tomorrow by courier.  Hopefully, we will get our new ones in about 10 days. We had a lovely lunch with friends from Hampshire which was a good distraction. Home via the Urgencias as I have a painful thumb. It has steadily got more and more painful. We were told that the doctors spoke English but no one there did!  Good old Google translate found me to have an infected nail bed and I’m now on antibiotics and an anti-inflammatory. I used my EHIC card and only had to pay €5.60 at the pharmacy - the first and probably the last time I have used the card. Oh, and I ordered a new iPad direct from Apple which Robert is paying for and we will reimburse him. Apple were so helpful - the chap really restored my faith in human nature.

Sue is also going to take in my new iPad and a couple of letters that will need to be sent to us regarding our losses.

We decided to have a day off as we just needed to chill and also catch up on things around the house.  There were still things to clean and put away.  Where the safe had been pulled out of the wall there was white plaster dust all over our clothes.  Down to Almeria tomorrow. 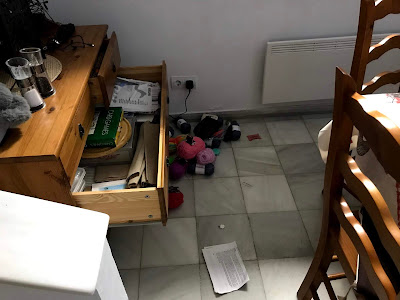 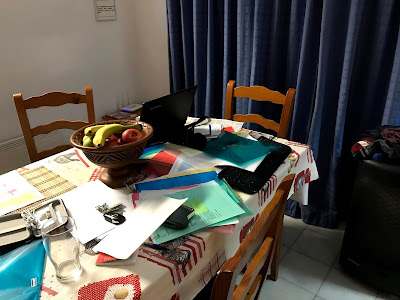 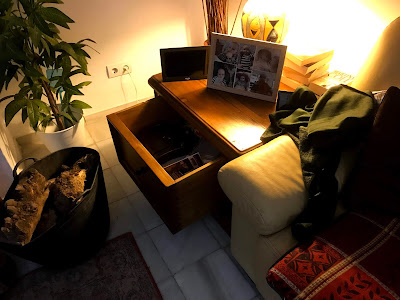 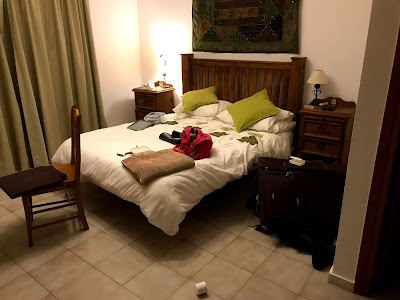 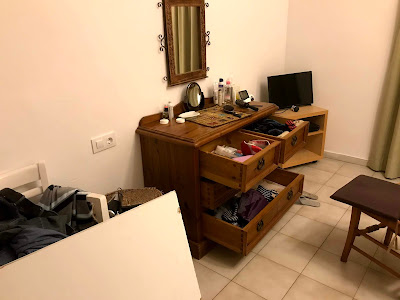 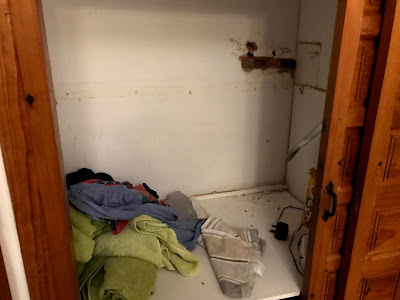 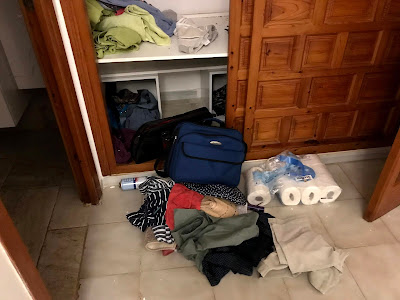 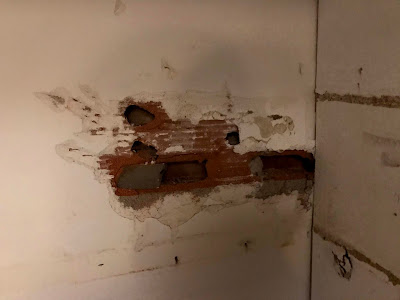 Posted by Linda Gifford-Hull at 10:07