Penny and Jim’s last day ☹️ We drove up to the Parque Comerical and managed to get the disabled parking spot.  After coffee at Masko Penny and I went down to Consum to get Penny’s obligatory gin and a few bits for us.  We dropped the bags off with Richard who was on his second coffee and went to one of my favourite shops to get a few gifts.

It was then back down to our end of the Paseo and to La Cabaña where we had arranged to meet Dot, Gordon, Cathy, Martin, Sue and Andy.  We had a lovely lunch with the staff bringing us out lovely tapas each time we ordered a drink.

Back at the villa Penny went off to pack, or at least I thought she had!  I heard a rather distant call from her and realised that she was in the pool!  She persuaded me to join her and I eventually braved my shoulders under the water.  The temperature in the pool was 20⁰ – which wasn’t too bad really – certainly warmer than last year. 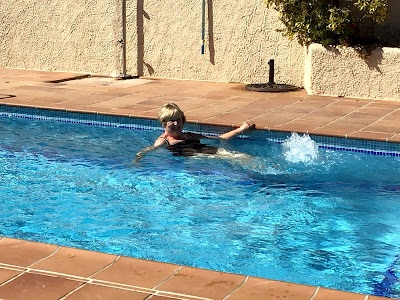 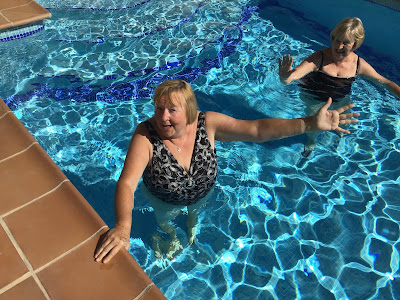 The alarm went off at 7am this morning – much too early especially as I didn’t get to sleep until gone 1am.  However, we were awake for a lovely sunrise. 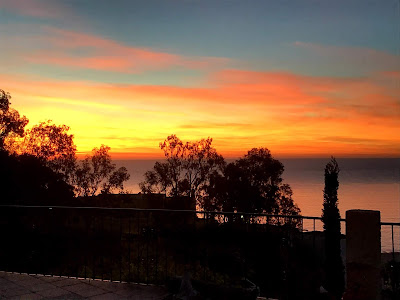 We wanted to leave for the airport about 8.15am and we were more or less spot on. We had a good drive down and arrived at 9.20am as instructed by the special assistance people.  We parked up and while the others got themselves organised, I went to call for a wheelchair for Jim.  A nice man appeared with the chair and got Jim organised and off we went into Departures.  The check-in wasn’t open, so we went off and had a coffee. Our cheerful chappy came back, helped Penny check in and then took them off through security.  We were able to watch them through a glass wall and realised that Penny had forgotten about her iPad and Jim’s tablet having to go separate and she had one in each carry-on! The cheerful chappy was so helpful – I think that without him Penny would have been super stressed!

We then drove to Cato de Gato to take Muffin for a walk on the beach.  The sea is very clear there and Muffin had a little paddle - I was tempted but didn’t.  We walked past a couple sunbathing and realised that they were naked! 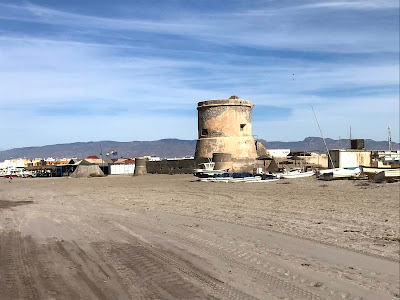 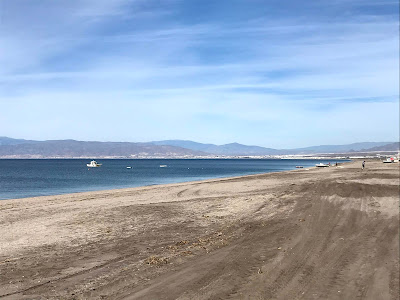 Vera was our next port of call and Iceland.  We didn’t need much but it was just as easy to come off the motorway there.  Back in Mojacar we decided to have a proper lunch as I had forgotten to take the dinner out of the freezer before we left.  We finally chose Badgers – a place we have never been to before.  The menu looked really good and we weren’t disappointed with the food.

Back to the ranch for a well deserved rest for Richard while I caught up with the blog.

Things were now beginning to kick off a bit in Spain with the coronavirus.  Two local councils were stopping big gatherings and closing schools.

As it was Friday was Turre market going to be on or not?  We set off and were pleased to see that it was there, as it was probably going to be the last one for at least two weeks.  I wanted to get a new chain for the jewellery stall and to see if I could get some shoes for both Penny and Richard.  I got my chain, but the shoe stall wasn’t very well stocked.  I joined Richard at the café for a coffee and went to look for my chain – I couldn’t find it.  I got everything out of my bag which included two shopping bags which I gave to Richard to look in.  No sign at all.  I went back to jewellery stall and explained what had happened and bought a new one.  My next stop was Super Turre which was heaving as it was market day.  I did my shopping and at the check-out got out the shopping bags (and yes you have guessed) the chain in its little bag fell on the floor!  Honestly talk about a man look!  I walked back to the jewellery stall and they very kindly gave me my money back. 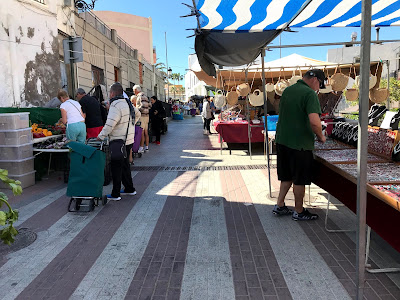 We went home via Thomas’s to get a few more bits.

We had a quiet afternoon and then I got a phone call from my son, Robert.  He has been very attentive this week worrying about us and the coronavirus.  He said that he felt that we should think about going home.  We then Facetimed with Victoria who agreed with him, so we decided to see if we could change our ferry to Wednesday next week and drive straight through taking it is turns to drive.  It was really a heart versus head decision.  Why would we want to go back to the cold UK and leave this idyllic place?