Today is actually Thursday 26th March and I'm only just getting round to finishing the blog.  I will publish the last four posts over the next few days.  But we are home, safe and well.

Today was a rest day!  It was also a very windy day.  We had a quiet morning then set the wheels in motion for an early afternoon barbecue.  Richard did the cooking, I prepared the salad and Penny did a fruit salad with strawberries bought on the market on Friday. Scrummy! 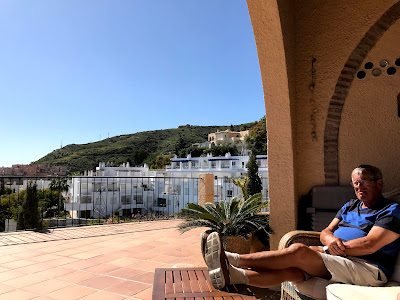 Back up to Bedar today to go to the Miramar to partake of their wonderful lamb, or rather Jim and I had lamb while Penny and Richard had something with chips!

Our first stop this morning was to go up to Casa Tina again, our home for next year.  I wanted to check on kitchen equipment and a few other things and to show it to Penny and Jim.  Richard and I still love it though it is going to be a different way of life being so high up – no popping down to the supermarket for milk! 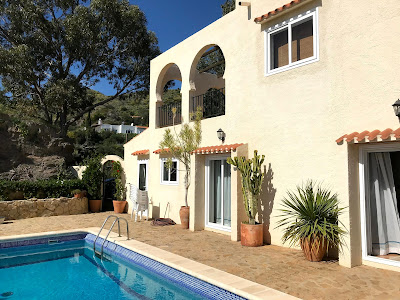 I wanted to take Penny and Jim up to Cabrera, so we set off towards Turre and then up to Cabrera which is situated in the Sierra Cabrera mountain range.
A few years ago, an Englishman bought a piece of the mountain and built a few Moorish style houses on it.  He then put them and some building plots up for sale – on the condition that any houses built there must also be built in the Moorish style and all kept the same brown colour of the mountain. Some of the houses are extraordinary with Moorish domes, filigree arches and turrets.  Apparently, most of the inhabitants are English and Germans who live here during the winter and return home in the summer, which means the community can be very quiet at that time.

We stopped and had a picnic with a wonderful view inland.  We continued up and stopped to take another look at the view.  When we turned round, we could see Garrucha and the sea – it really was a wow moment. 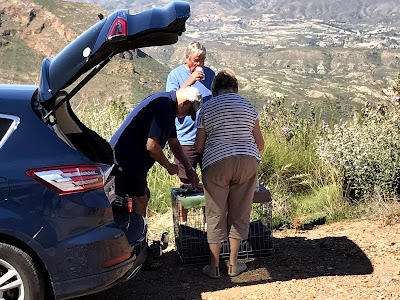 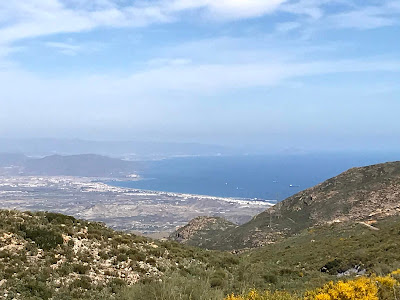 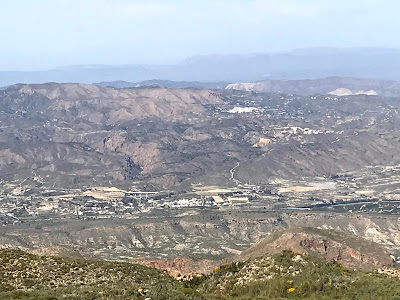 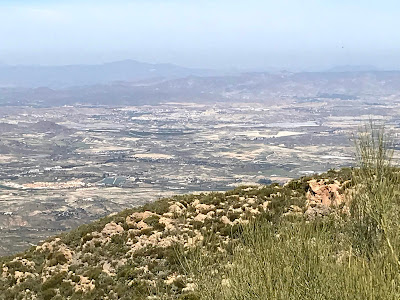 We continued as I knew we would come out, eventually, in Sopalmo.  Just when we thought we couldn’t go any higher we found that we could!  Suddenly the lovely tarmac road gave way to an unmade surface which, in places, was extremely rough.  There were parts of the road where the drop was almost sheer, but I tried not to look!  Muffin got quite upset so was allowed to come and sit on my knee.  We passed through a small community and thought that the road must improve from there on but no, it remained the same!  Gradually we descended until we finally came back to civilisation – Sopalmo.  I think Richard quite enjoyed the drive though it was quite stressful, and he did wish we had had better tyres on the car!

When we got home, Richard took Muffin for a walk on the beach and to take the poor car for a wash – I have never seen so much dust on the back of our car!

In the evening we went to Al Punto for a last supper.  The restaurant is a Brazilian Rodízio - an all-you-can-eat style of restaurant. The meat is served right off the cooking spit and sliced at the table. It was accompanied by chips, fried bananas, black beans and rice.  We were given a card - green, on one side, to indicate to the server to bring more meat and red on the other side, to indicate that we were stuffed sufficiently full! 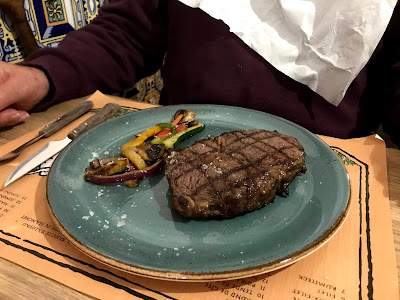 Posted by Linda Gifford-Hull at 17:29