Spain 2020 - A sad farewell, a pretty awful journey and another "burglary"!

We spent the morning doing the final packing and then Richard had to pack the car.  I really don’t know how he does it but it doesn’t seem to matter how much stuff there is he always gets it in!  However, I did catch him walking to the bathroom with a pack of toilet rolls!  He said there just wasn’t any room for them, but I took them out of the plastic and shoved them in where I could!

We had lunch, a veritable feast of lasagne, peas and Magnums!  All taken out of the freezer.

It was then time to leave.  I felt quite depressed as we drove away, but that depression only got worse as we drove along the Paseo.  All bars and restaurants along were closed and everywhere looked so sad.  However, one of our worries had been that we would be stopped before we got as far as the motorway but there were no police anywhere. The traffic on motorway was light to start with but as we moved north it did get a bit heavier.

The overhead gantries had signs up that said PROHIBIDO VIAJES NO JUSTIFICADOS (UNJUSTIFIED TRAVEL FORBIDDEN). 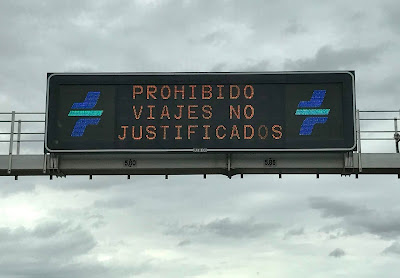 Further on the signs were telling us how many people had the virus and how many deaths there had been in each region.  Not nice.

Other than the usual lorries on the roads the amount of cars was minimal.  However, there were a number of motorhomes from lots of different countries.  Some of which were from Germany, Netherlands, Austria, Finland, France, Switzerland (this one was bright orange), Belgium, Czech Republic, Norway, Poland and even Columbia!!

We stopped at a service area for a cup of tea.  We were self sufficient on the food and drink side which was just as well as there was nothing open.  Of course, that meant that were no toilets open either!  We moved on to the next service area and that was just the same.  Richard got some fuel but had to pay using the outside night-time facility.  There was only one thing for it but to find a hedge or tree where I couldn’t be seen but with all the lorry drivers around that wasn’t easy!!!!

As we got further north the temperature got down to 5° - we had been used to it being in the 20s!

We crossed the French border just after 9pm.  We had expected police or border guards but not a soul!  However, we met thick fog in France which fortunately dissipated as we dropped down.

There was one good thing that happened today, I won £10 on the post code lottery.

We had been taking it in turns to drive but I hadn’t had a good night’s sleep on Sunday and was extremely tired.  At one stage I was out for the count and Richard felt tired so he pulled into an Aire so he could sleep too.  It was about 1am.  I woke up and thought that maybe we shouldn’t be stopping there as it was very quiet and I had heard of stories of people being gassed in their cars by thieves.  However, I just said to him to make sure the doors were locked.  I heard the clunk as they locked.  You are never going to believe what happened next, but we were “burgled”.  We were asleep when firstly Muffin woke us both up by growling, he often make noises in his sleep, so we weren’t worried.  Then we heard a noise and Richard leapt out of the car to see a bloke running off with his sponge bag and, we later discovered, my sleep machine. We know that Richard had locked the doors, but the boot lid obviously hadn’t locked. Richard checked round to make sure the chap hadn’t dropped anything but there was nothing. The annoying part is that the guy will just dump the stuff as it will be no use to him. My sleep machine belongs to the NHS so hopefully the hospital will give me a new one and all that was in the sponge bag was the usual stuff plus a razor and two electric toothbrushes that were going to be replaced when we got home.

After the “burglary” we moved on pretty quickly and drove on, swapping over, until it got light.

One of the things that we noticed were the amount of cars heading south.  There were very few cars going our way but the number going south was enormous.

We stopped for some breakfast with a very welcome cup of tea.  Yesterday I had filled the two vacuum flasks with boiling water which had given us 2 drinks each yesterday but the water wasn’t hot enough to make tea this morning so I put what was left in each flask into the 12v kettle and boiled it up – magic a hot cuppa!

We made one more stop and I got two coffees out of a machine – it was surprisingly good!

We kept on heading north then suddenly we realised that there were no cars on the road.  It had gone midday and France had gone into lockdown and cars were only to be used for certain things. Travel to and from work, essential food shopping, medical appointments and vital family reasons such as providing care to children or the elderly (but not family visits). If you disobey these rules you can be fined.  These fines were set €38 when the lockdown started but have been raised to €135.  You also have to have a form each time you go out stating why you are out and what time you left home.  If you are travelling to work your employer needs to sign the form.

We arrived at Eurotunnel at 1pm.  First, we had to check Muffin in, so we drove to a compound where there were quite a few cars and motorhomes and lots of dogs!  We checked in and were give a shuttle two hours before our booked one.  Before we knew where we were we were on the shuttle and heading to Folkestone.  Muffin had been really bored and had been whining so I put him on my knee for the crossing, 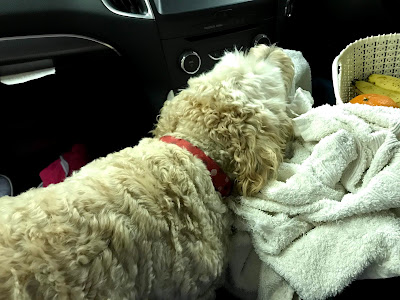 The journey is so quick and we were soon back in Folkestone and on the M20.  We stopped for something to eat and found McDonalds.  Richard likes to eat in usually but we took the food back to the car.

The journey back home took 2½ hours but I don’t remember most of it!  I guess I must have been asleep!

We arrived home at 5pm.  28 hours of almost continuous driving.  We were greeted with a cup of tea but no hugs for my daughter!  We are now in 7 days of self isolation just in case we have picked anything up.

It is wonderful to be home.

I thought I would sleep really well but with no sleep machine I didn’t.

We had unloaded the car yesterday and dumped everything in the hall so that lot needed to be addressed.

Bad bits
Our journey down being delayed by a day because of Storm Gloria.
We got burgled.
I got an infection under my thumb nail which was very painful.
We were coming home a week early as we had forgotten that the car needed its first MOT!
Dealing with the insurance companies after the burglary.
The hassle of getting new passports.
Richard’s speeding fine!

Good bits
The villa was lovely with an amazing view.
We had wonderful weather.
We had two lovely visits from family.
Catching up with friends.
Views from Cabrera.
The sunrises and sunsets.
My lovely amaryllis.
Finding Casa Tina for next year.

Thursday 26th March – I am only just catching up with the blog with everything that has gone on since we got home.  We are now in lockdown and hoping and praying that we will all beat this awful virus.  I wonder when the world will be back to normal.

Thank you for reading my blog/diary.