We didn’t rush this morning as there was nowhere to go! However, at 9.26am we got an email to say that the bridge would be open from 10am to 11am and then again at 2pm to 3pm. We flew round getting ready to leave (I was still in bed!). Just as we were about to leave a boat came passed us – goodness knows how they got ready so quickly! We moved down the canal to Allen’s Lock where Richard got chatting to the boat who had passed us only to find that they had no idea there was even a problem with the bridge!

Actually, we were quite relieved to be moving as something had upset a field of horses next to us and they were whinnying neighing loudly! As much as I love horses, they were beginning to get annoying ☹

Just after Allen’s Lock is a lovely farm with an amazing 15th century tithe barn which is Grade I Listed and has been since November 1951. The barn was built for New College, Oxford. Next to the barn is St. Mary’s Church – you can just see the tower from the canal. The church is Grade II* listed building. If you are interested there is a Wikipedia page on Upper Hayford which is very informative. 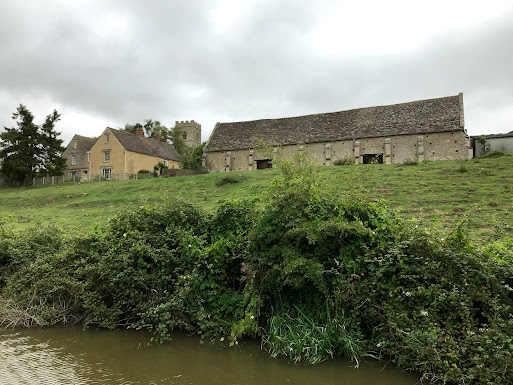 At the bridge there were two boats in front of us and we were all waved through by the C&RT guys. There were quite a few boats waiting to come through the other way and the first one had a go at us saying that one in and one out obviously hadn’t worked for us! I told him that we had been waved through, but he wasn’t a happy bunny!

We had to smile as when I said to the C&RT guys that we had seen the email they asked us what the opening times were! 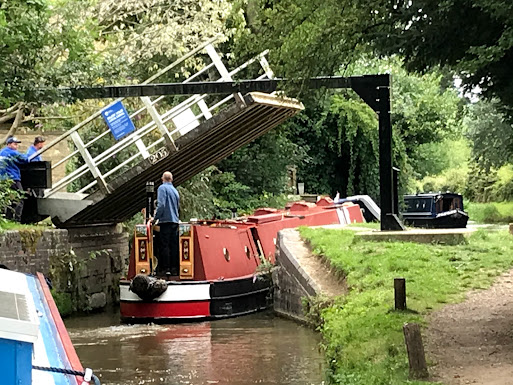 Lower Heyford was chaotic with the permanent moorings and boats going both ways and it was very slow progress.

A rather large tree had fallen across the canal allowing one boat to pass at a time. The boat in front of us was a big old ex. workboat with, I guess, a deep draught and he got stuck! He pulled out a saw and cut off a few branches and managed to free himself and continue on. 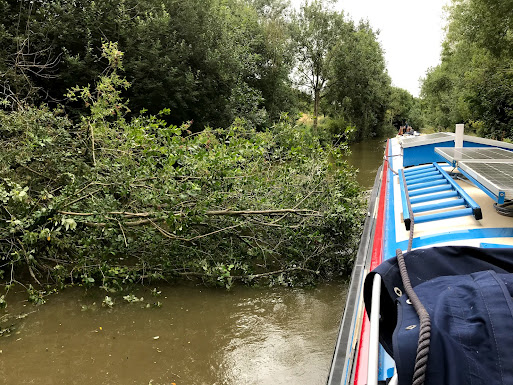 We expected there to be a queue at Dashwood’s Lock – there were three boats in front of us, not too bad. The ex. workboat had trouble getting out of the lock but managed with a lot of men pushing the gate.

When we got to Northbrook Lock the ex. workboat was already in the lock and trying to get out. He was well and truly stuck as the gate would not go back properly. Eventually the managed to flush him out but he was on the lockside and the boat was in gear – he had to do quite a leap to get back on! But then it got worse! We couldn’t get out either ☹ There really was something stopping the gate from going back. There were four men, two women, one child and three dogs all trying to get us out! Finally, Richard and one other man, got their poles out and could feel that there was a lot of silt behind the gate and managed to pat it down until the gate opened enough for us to get out. Phew! I didn’t fancy sitting in the lock until C&RT came! 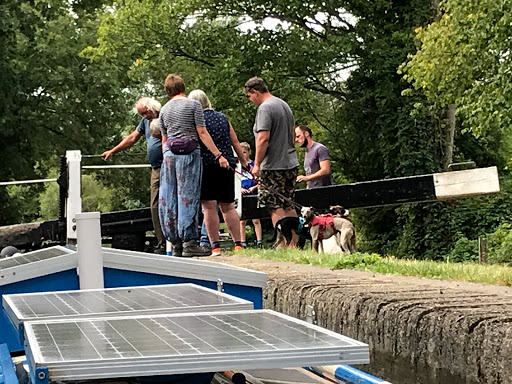 We had planned on mooring up overnight at the disused quarry at Kirtlington however Richard thought better of it and moored up just passed Old Brighton Bridge. We had lunch and then moved on as it was pretty dark where we were and, as well as mornings, I don’t do dark!!! We stopped short of the Kirtlington Pipe Bridge where the River Cherwell was really close to the canal. We sat out reading for the rest of the afternoon.
4.07 miles
4 locks
Posted by Linda Gifford-Hull at 10:09