Up and away by 9am.  We stopped at Rushey Lock to empty the cassettes and dispose of the rubbish only the bin was locked!  We debated about just dumping the rubbish but thought better of it.  Rushey Lock was on self service and it was a nice easy descent.
This was our sunset last night, I haven’t seen one like this for a long time. 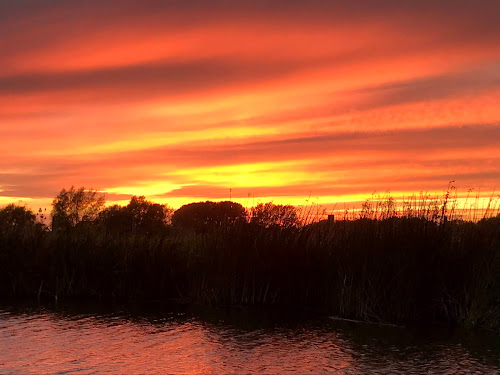 The Lock Keeper was on at Shifford again.  I asked him why the rubbish bin was locked at Rushey and he said that it is something to do with access.  The lorry can’t get down or something.  At least it wasn’t Covid!
Here is a bit of useless information about Shifford!  In the year 890AD, King Alfred (he of the cakes) is said to have held one of his parliaments in Shifford. In early times, Shifford was a ‘sheep ford’.
Between Shifford and Northmoor Locks we came across three boats that were Venetian Rowing boats.  The boats were from the City Barge Boat Club in Oxford and they are rowed similarly to gondolas in Venice, standing up and facing forward.  It looked really hard work!
Northmoor Lock had a Lockie working and we shared the lock with a hire boat.  The Lockie suddenly realised that the bow rope on the hire boat was tied, he soon sorted that out.  He went to check to stern and I heard him say, “can you hold the rope” and the answer was “I’ve got my foot on it as it is hard to hold a rope and my phone at the same time”!!
We pulled over at Bablock Hythe and moored up for the night.  We have a Sainsbury’s order coming in the morning.
There was a ferry across the River Thames at Bablock Hythe from the 13th century. The hand-propelled cable ferry was said to be the first along the Thames and was still in use for cars and other road vehicles up until 1959.
I have copied this from Where Thames Still Waters Glide
1964 - John McCarthy -
In 1964 we took our new Hillman Minx complete with the family onboard the ferry but as we crossed it began to take on water and slowly started to sink! However, we made the other side without recourse to putting women and children in the lifeboat and my wife even managed to take cine film during the crossing, so I have full proof we did the passage.
I was subsequently told it was the last time it 'sailed', which was not surprising. As you can see from this scanned print, my attached photo was obviously taken with the ferryman using a rope to pull the ferry across to our landing.
11.20 miles
3 locks
Posted by Linda Gifford-Hull at 10:07