I got a bit of a fright when I opened the side hatch this morning!  I had some bread, so they were happy.   And, yes, swans are allowed to eat bread. 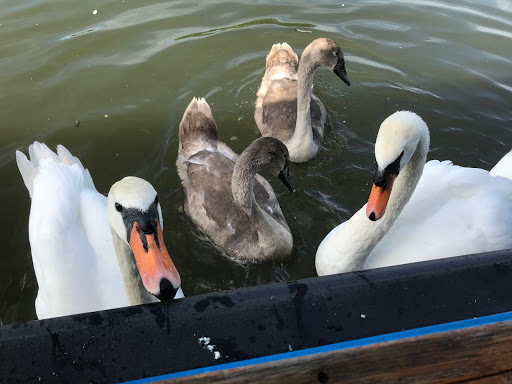 The Lock Keeper was on duty at Pinkhill Lock for our fifth trip through this year.  He has a very bouncy Cockapoo (Riley) who used to be by his side all the time but maybe he has become a bit of a liability now, however he came out to say hello as he was on his way for a walk.

We had a quick pit stop at Bablock Hythe to post a couple of birthday cards then carried on to Northmoor Lock.  We shared Northmoor with a motor cruiser, but an old fashioned type of one with a sliding roof.  We just managed to get both boats in the lock as Ivory Gem is as wide as the lock!

Richard had planned to stop at New Bridge, but we knew that the mooring isn’t good as the bank is so high.  There is one nice spot, but Ivory Gem had got there before us.  Richard really shouldn’t have been so nice and let them go before us after we came out of Northmoor Lock first!  We debated about going on a bit, but it was beginning to drizzle, so we moored up against the high bank.  I decided that I really didn’t need to be going up a 60° gangplank so I stayed put. 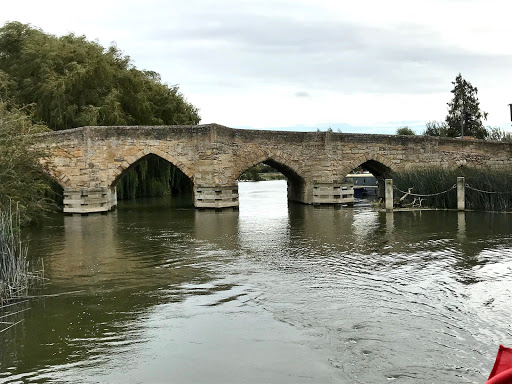 The village of New Bridge is named after it’s bridge which is, not surprisingly, called New Bridge!  However the bridge is far from new with it being built in the 13th-century bridge and is one of the two oldest surviving bridges on the Thames. The northern span is listed as Grade I and the southern as Grade II*.  It was built by monks on the orders of King John in order to improve communications between the wool towns in the south of England and the Cotswold farms.  It was originally much longer than it is now, with 51 arches and being 726 yards long, compared with the current 12 arches (I only counted 6 but maybe the others are hidden somewhere).  In 1644, in the Civil War, the Battle of Newbridge was fought on the banks of the river. Parliamentarian William Waller attempted to cross in order to surround Oxford and capture King Charles but was defeated.  I guess the battlefield is probably where we are moored.
It was a very lazy afternoon with mostly reading and a short snooze!
7.03 miles
2 locks
Posted by Linda Gifford-Hull at 12:13