Richard’s alarm clock is still out – this morning it was 7.30am!

There were 7 boats in at Clifton Cruisers.  Of course, the schools have gone back so I guess that’s probably why!

We pulled over for lunch just before Hilmorton then Muffin and I set off for the locks.  There was a lockie helping out at the bottom locks, so we were straight through that one.  As I walked to the middle lock Muffin decided to have a poo.  I looked in my pocket for poo bags, but I hadn’t got any, so I called to Richard.  He duly pulled over and gave me a whole new roll.  As I was taking the little bit of sticky tape off the roll, I dropped the whole lot into the canal, and the roll unravelled.  As I can’t kneel down because my knees are so bad, I was a bit stumped, but there was a lady walking down the tow path with a windlass and she very kindly knelt down and fished the bags out.  There were boats coming down both the middle and top locks which speeded our passage up.  I was also videoing Richard going through the locks. 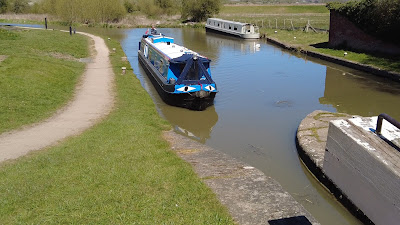 Back at the marina Richard was trying to pull over onto the service pontoon when the wind suddenly got up.  He was on the pontoon holding on to the centre rope and there was every likelihood of him losing the boat!  Superwoman to the rescue (!) I had been in the cratch videoing and didn’t even realise that we were going for diesel.  I galloped through the boat, leapt onto the pontoon and pulled Mary H back in – single handed!  OK so I wasn’t actually single handed, but it makes the story sound better.  After filling up we moved over to our pontoon.

We were sitting on the back deck having a cup of tea and we were deafened by the silence!  All we could hear was a few birds and the odd lamb bleating.  Then I noticed a headless swan floating around. 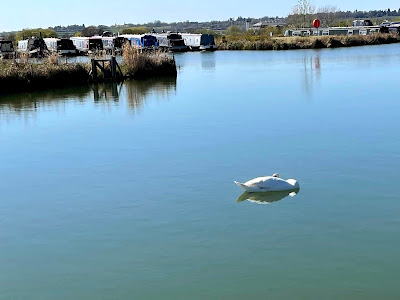 I was very pleased with the videos I took at Hilmorton and the marina, but I still have to edit them.  I hope, with my future son-in-law’s help to be able to put both this video and the Hawkesbury Junction one onto an extra blog next week.

When the Oxford Canal was completed in 1790 it followed the contours of the land, meandering around hills and along the sides of valleys to avoid the expense of digging cuttings and building embankments.  By the 1830s it had become obvious that a more direct (and, therefore, faster) route was needed so much of the Oxford Canal north of Wolfhampcote was straightened. This involved many short sections of new canal to bypass the worst twists and turns of the original route. The overall distance between Hawkesbury and Oxford was reduced by about 20 miles to its present 77 miles.  You can see from the 3 screen shots below just how twisty it was.

The cost of straightening the canal was estimated at £131,000 in 1829 and had actually cost just over £171,000 by completion in 1834. The company soon set about selling off the unused sections of the old line such as this one which totalled nearly 10 miles in all and by 1843 had recouped over £7000 in sales of land and reclaimed materials. 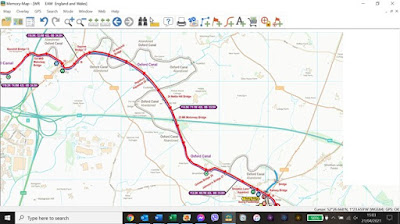 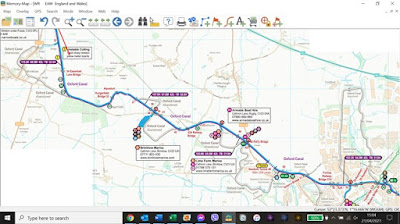 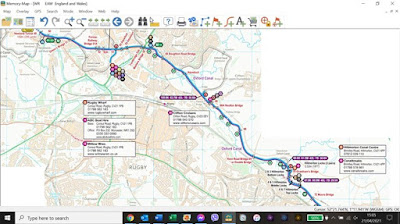