We had already decided to stay put today and we woke to a perfect day.  Richard took the opportunity to varnish the taff rail and do a few other jobs while I finally managed the get the Hawkesbury Junction video onto the blog.  The trouble was that it didn’t stay there!  It wouldn’t appear on phones, it would seem that it a recognised problem and then it disappeared off laptops and iPads ☹  I will have to ask my personal technical support for some help when I get home.  James is going to make the most amazing, fantastic, phenomenal and incredible son-in-law!! 😊 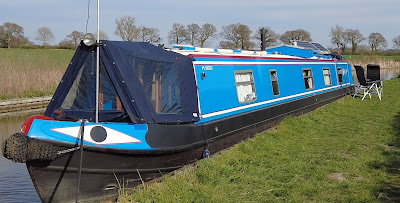 I think I have fathomed out how to use my video camera on its own, but it will be much easier to use it with my phone.  That lesson is yet to come!
We had some visitors this morning.  Mummy duck and her brood.  I think Richard and I finally agreed on there being 14 babies!  They move so quickly that it is so difficult to count them! 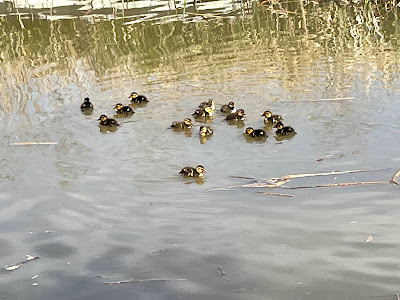 We really had chosen a prefect mooring spot.  Quiet and relaxing.  That is until the famer decided to muck spread the field next to us!  It wasn’t that smelly thank good and the tractor noise wasn’t obtrusive so it didn’t really bother us.
I was seven weeks old when the Queen was crowned.  We didn’t have a TV, but some friends of my parents did, and I was taken along, put in my carry cot on a table and wedged up so that I could see what was going on!  I was never told if I enjoyed it or if I fell asleep.  From then on Queen Elizabeth II and Prince Phillip were in my life.  I must have been about 7 when my Mother took Penny and me up to see Trooping the Colour and from then I just loved happy Royal Occasions.  I have to admit that I don’t remember the Queen Mother’s funeral, but I may well have been working abroad at that time, but I do remember Diana’s funeral very well.  In recent years we have had happy Royal weddings to remember and talk about, but today I personally have mourned an amazing man who has stood beside his wife, his Queen, for 69 years.
I watched Prince Philip’s funeral in the afternoon.  His final trip from Windsor Castle’s State Entrance to St. George’s Chapel on the Landrover was a real piece of pageantry.  I had tears in my eyes when Huw Edwards said, as the cortege moved off, that the Prince was in front of the Queen for the first and last time.  I found the service very moving, and I felt the sight of the Queen sitting on her own heart breaking.
I’m going to try and embed another small video of the ducklings.  I hope it stays there.
Posted by Linda Gifford-Hull at 14:01