We woke up to a blue sky and sunshine, but it soon clouded over ☹

I asked Richard if he had a plan but all I got was “to get moving”.  That’s not what I expected or wanted to hear!  If you are a regular reader, you will know that I am a planner and an organiser, but I just can’t get my head round that we don’t have a plan.  I’m blaming Covid! 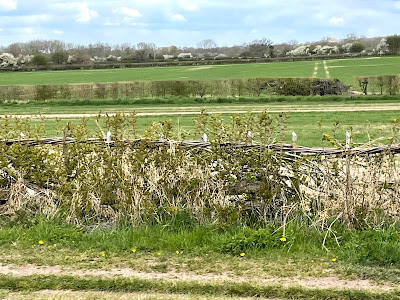 I spent most of the day with my nose in my computer as Richard would say!  However, I managed to edit the Hawkesbury Junction video which I will put at the end of the blog, I hope it works and that you enjoy my first attempt.

I also, with the help of Brian Holt (Harnser’s Travels), managed to get Waterway Routes onto my iPad but that was after we had stopped for the day so I am hoping that it will work when we move!

All in all, a very productive day!

Just one more thing to master now and that is my Pocket video camera.  Hopefully, I can do that tomorrow as we aren’t moving.

We passed Sutton Cheney Wharf where there is a café and it appeared that all its outside tables taken.  There is a service pontoon there too.  The visitors mooring pontoon just up from the wharf is being rebuilt and will be fantastic when it is finished.  The last time we were on the Ashby in 2016 we stopped on the pontoon and it was pretty rickety then!

It was my birthday last weekend, and I was given a birthday helium balloon.  We brought it with us.  It moves up and down the boat and yesterday it was by a window.  Richard was wished a happy birthday three times today! 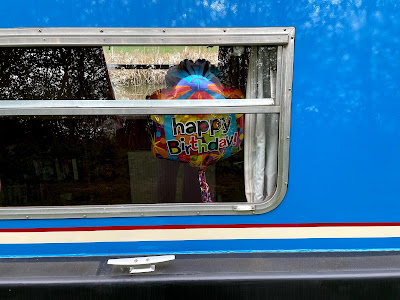 We pulled over just after bridge 46 in a lovely spot.  There is lots of mooring on the Ashby and we are on a long stretch, with us at one end and one other boat at the other end.  It is so quiet, all we can hear are the birds which is just wonderful.

The Ashby-de-la-Zouch (or Ashby) Canal is 31 miles long and used to connect the mining district around Moira, just outside the town of Ashby-de-la-Zouch, with the Coventry Canal. It was opened in 1804, and several tramways were constructed at its northern end, to service collieries. The canal was taken over by the Midland Railway in 1846, but remained profitable until the 1890s, after which it steadily declined. Around 9 miles passed through the Leicestershire coal field, and was heavily affected by subsidence, with the result that the section from Moira, southwards to Snarestone, was progressively closed in 1944, 1957 and 1966, leaving 22 miles of navigable canal.

The Ashby Canal Association (ACA) was formed in 1966, born out of concern caused by the progressive closure of the northern 8 miles due to the mining subsidence.  In 2001 a mile or so of canal was restored between Donisthorpe and Moira and in 2006 another short stretch between bridges 61 and 62 was opened after bridge 62 was completely rebuilt.  The winding hole after bridge 62 is only for boats less than 52 feet long so we won’t be going.

Posted by Linda Gifford-Hull at 12:47